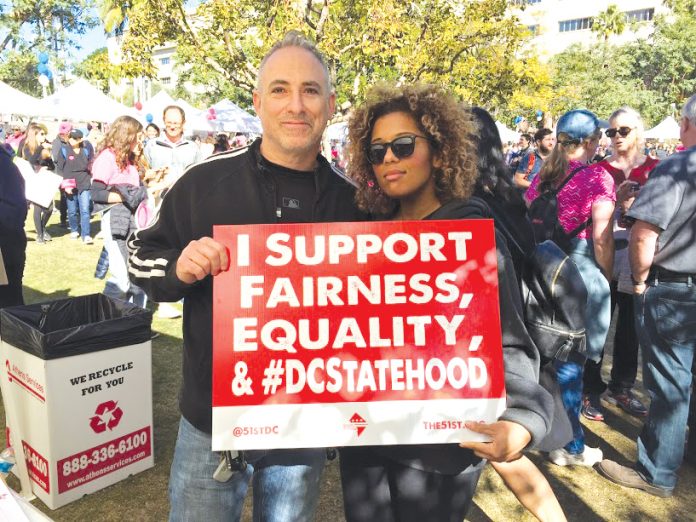 I spent a weekend in Los Angeles talking about DC statehood, and it was both insightful and inspiring. One evening, a friend hosted an event where 25 friends assembled in his living room to learn about and discuss the District’s political status. The following day, I had an info booth at the Women’s March-Los Angeles, where two friends and I spoke with over 300 Californians about DC statehood. On my plane trip back east, I jotted down four words that summed up my experience: ignorance, indignation, support, priorities.

The Women’s March was filled with smart, passionate and politically active Californians, yet it was sobering to talk with so many people who were ignorant about our political status. Time and again, people had no clue that we were taxed without representation, that we do not have the final say over budget and laws and that Congress meddles in our local affairs. Many did know about our status, but most who came to our table were uninformed about it.

People could not believe what they were hearing as I talked to them about the federal district’s lack of rights. They went through a range of emotions from shocked to confused to downright indignation. Not only were they upset about DC’s lack of voting rights and autonomy but they were equally indignant that their two senators, Dianne Feinstein and Kamala Harris, are mute on the subject. There was no equivocation by anyone we spoke with that they supported our right to have equal congressional representation and autonomy over our own affairs.

While we spoke with hundreds of supporters at the Women’s March, it was clear that many people in California have other issues higher on their priority list to commit to and work on. With daily threats to civil rights and civil liberties, many questioned whether they should prioritize this issue over others.

My interactions over two days were both inspiring and empowering but also demonstrated how far we have to go. Knowing that statehood for DC is not a reality with this Congress and the current occupant in the White House, there clearly is a lot of work for all of us to do.

First, we must wage a war against the ignorance around our status. While one or two visits to friends’ homes around the country is important work, it’s not nearly enough. The people of the District need to invest in a multi-million-dollar campaign to educate the nation about our status. We need to commit public and private funds to grassroots organizing in tandem with a multimedia campaign.

Second, we need to have direct asks ready for people who are angered by our status and supportive of statehood. We need to tell our allies to call their members of Congress and ask them to co-sponsor the statehood bill. We need to ask them to host events at home, post information on social media, ask organizations to which they belong to endorse statehood and support candidates who support equality for the people of DC.

And finally, while we’re breaking down the great barrier of ignorance and building alliances, we do need to recognize that this year is not our year and that our allies need to fight other fights too. Our allies need to focus on combating the assault on civil rights and civil liberties as well as organizing for electoral changes, but we need to make sure that they commit to being there when we need them in the coming years when we are able to truly push for a vote on statehood legislation.

Californians taught me a lot over two days. They reaffirmed that when people know about our cause they are dumbfounded by our status and supportive of the end we seek, statehood. Californians showed me that we have a lot of work still to do to reach and teach Americans about who we are and what we want.

I’m ready to take this show on the road again. Who’s with me?

DDOT To Remove Parking to Accommodate I Street Bike Lane