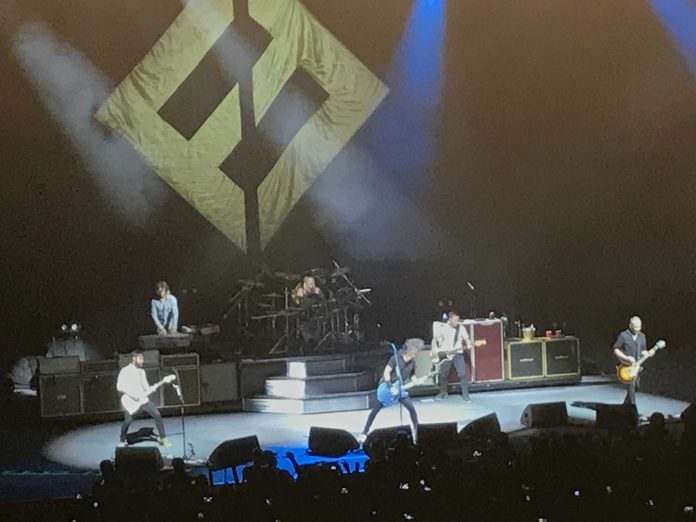 The Foo Fighters took the stage last night at the Anthem, a new concert venue at The Wharf, a $2.5 billion renovation of the Southwest Waterfront. The Anthem from I.M.P., the wizards behind the 9:30 Club, is a 57,000 square foot, $60 million facility that can accommodate up to 6,000 music lovers. With nine bars on three levels and boasting the best acoustics on the East Coast, the club has already attracted headliners such as Bob Dylan, O.A.R. and The Lumineers. It is booked through the spring.

The Foo Fighters arrival generated an enormous amount of excitement. Dave Grohl, the band’s front man, grew up in the area. He played at the 9:30 Club as a member of several bands including Nirvana. The Foo Fighters were a regular attraction at the club until its popularity pushed it to larger venues. Grohl paid homage to the Southwest Waterfront on stage recalling his childhood visits to the Fish Market.

Tickets to the Anthem’s opening show sold out in under 60 seconds. Fans began lining up to get in at 10 a.m. By the time the doors opened at 6:30 p.m., the line stretched back to Seventh and Wharf Streets SW and then twice around the District Pier. The crowd was well mannered and security handled by the Anthem staff backed by The Wharf and MPD was courteous, efficient and well organized. By 7:15 p.m., the line had vanished.

Walking into the Anthem, this writer was struck by its sheer size. The cavernous entry is topped by a neon highlighted swimming pool whose bottom is transparent. The venue itself reminded one of the 9:30 Club. A massive concrete dance floor surrounded by cantilevered balconies containing permanent “super excellent” seats and standing areas. Despite the sold out crowd, unlike its older sibling , the venue was easy to navigate with wide stairwells. Most important, the sound, while loud, was crystal clear whether in the balconies or in the middle of the floor among the packed dancers.

The Foo Fighters mixed favorites from their older albums with material from their latest record. Grohl’s roaring rendition of “Times Like These” brought the house down. In “The Pretender,” another favorite of this writer, began with Grohl alone crooning:

Like many other Foo numbers, the tempo increases ending in a shouted anthem. The DC crowd clearly grasped the contemporary irony of both songs. In answer to Grohl’s screaming query to the audience about the death of Rock & Roll, the answer, in the case of the Foo Fighters, is a rounding NO!