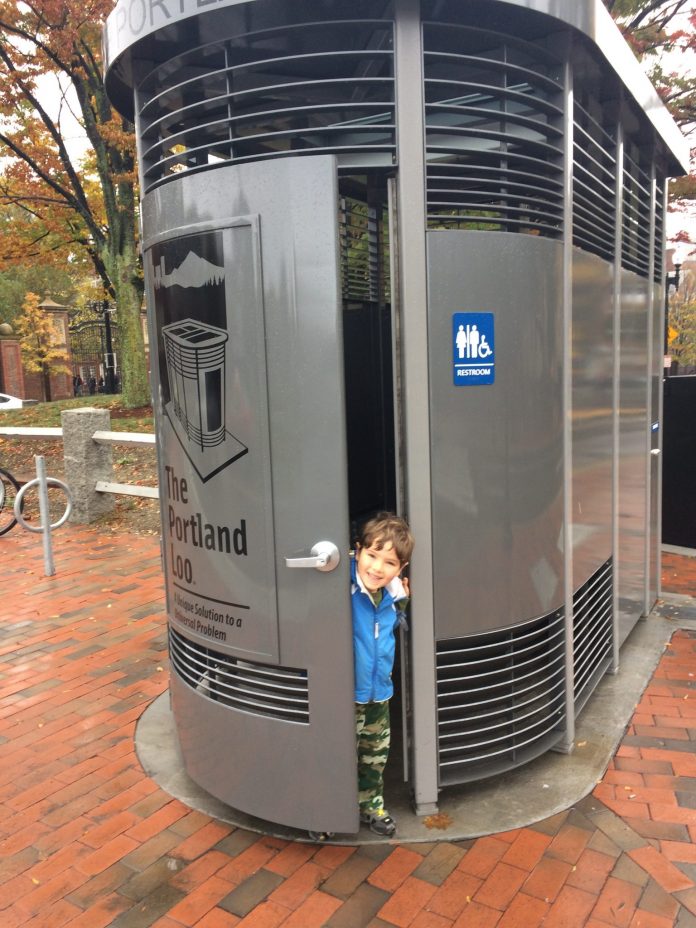 A plethora of “No Public Restrooms” signs are plastered across the doors of businesses across the District, and it’s no secret that finding a public restroom in DC is a challenge for tourists, residents and individuals experiencing homelessness alike.

A report issued in May 2022 provided recommendations on how to provide clean, accessible facilities in the District, suggesting stand-alone facilities be placed at three sites: Union Station, Dupont Circle and Starburst Plaza.

Limited Access
The report was put together by a working group, created in response to the Public Restroom Facilities Installation and Promotion Act, and comprised of members from DC Government Agencies as well as five community members.

Members of the organization DC Public Restrooms visited 85 private establishments across the District including Gallery Place, DuPont Circle, Columbia Heights, Georgetown and along K Street. DC Public Restrooms found that only about half of the establishments allowed individuals to use the restroom without the expectation of patronizing the business.

A follow up study of those businesses the following year found that of the 45 places that had permitted use of facilities by non-patrons, only 28 were still permitting use without purchase. The team says that while some private businesses allow public access, the dwindling number presents sometimes urgent challenges for the public.

Marcia Bernbaum serves as a lead strategist, research coordinator and overall tracker of DC Public Restrooms. Bernbaum previously worked overseas with the United States Agency for International Development (USAID). She said there are greater resources available to residents and tourists of European countries. She particularly noted the infrastructure in England, which accommodates public bathrooms for all.

Bernbaum discussed the potential implementation of a program to provide financial incentives for businesses to open their existing restrooms to the public: cycists, shoppers, tourists, families, children and those experiencing homelessness. She emphasized that the “community buy-in” is crucial to providing access for everyone.

“We’re passionate about this,” Bernbaum said of the organization. “We want to do it right, we want to make sure (that) stand-alones are placed in places that meet the criteria.” Bernbaum said there are also certain areas that “desperately” need public restrooms east of the river.

Department of General Services (DGS) Director Keith Anderson, spoke positively about the research development and the future implementation of the program. The design for the facilities has not yet been finalized, he said. Anderson said the department’s three main concerns with the restrooms are cleanliness, security and functionality.

Anderson said that community input was at the forefront of the process and that the community response has been overwhelmingly positive and well received.

“We’ve done a tremendous amount of homework in terms of the public health benefits of public restrooms,” Anderson said. “We engage deeply with the community to include advisory neighborhood commissioners (ANCs) or commissions, business improvement districts and members of the community on these facilities.”

Location Determination
The focus of the effort is “high need” locations. Dupont Circle is an example of an ideal spot, according to Bernbaum. The site is located near metro, with shoppers, commuters and tourists, she said, all factors that added points when evaluating potential facility locations. “You have a little bit of everything and then at night very active nightlife, with bars and restaurants and people experiencing homelessness.”

Safety, Bernbaum emphasized, is absolutely fundamental. She emphasized the importance of making public restrooms accessible to all and taking the necessary precautions to mitigate crime.

“We are not against putting a standalone (restroom) in an area where there are a lot of crime issues and people need it. The issue is in the precautions taken to make sure it’s safe for anybody going in,” Bernbaum said. “[T[he criteria for selecting and deciding whether it’s successful or not, is looking at crime incidents and costs to install, repair and maintain.”

The Existing Facilities Question
However, some have questioned the recommended locations, pointing out that facilities are available at metro stops. After a presentation by the working group to ANC 6C, Commissioner Kelty expressed opposition to the program and advocated for a use of public facilities already in District metro stations that he says have been “intentionally made inaccessible.”

“My initial reaction to this was, rather than spend all this money building new toilets, why don’t we compel, encourage [or] pay metro to open up the toilets they have and staff them and address whatever concerns they have with making them available,” Kelty said, noting that the facilities already exist at many metro stops, were once available to the public and would have utility connections already in place. Kelty argued that it would be a much better use of the taxpayer dollar to return metro facilities to the public use.

However, WMATA Media Relations Manager Sherri Ly said that the original design of Metro did not include public restrooms. While all 91 Metro stations have employee restrooms, they are located in secure ancillary hallways that require employees to open doors if a member of the public requests access. Six of these are not accessible to the public for security reasons (Pentagon, Anacostia, Rhode Island Avenue, Congress Heights, U Street and Addison Road). The five newest stations on the current Silver Line extension were designed to include public restrooms.

So, while 85 of the stations technically have public access to restrooms, because a Metro employee is needed to escort a patron to the restroom and unlock a door, in reality there is no public access. Station managers have many duties. As Ly says, “There may be times when there is a medical emergency, crowding issues or other service disruptions, when the station manager… is unable to assist.”

Ly said the Metro system is working to make these existing facilities accessible when needed.

Bernbaum noted that while the utilization of WMATA’s restrooms would be beneficial, their use would not replace the need for the stand-alone restrooms proposed in the pilot.

“It’s not one or the other, Bernbaum said. “It’s just we desperately need the investments. We’re looking at personal and public health, (and) we’re not talking about a lot of money.”

Additionally, she noted, WMATA has limited operational hours. The public restroom pilot proposes 24/7 restroom access which would also fill the gap between the times that the metro is not open.

Future Directions
Agreeing that there is a public need for 24-hour availability of restrooms, Anderson said DGS remains focused on above ground restrooms in “strategic areas” and said that the department has “not had the conversations with Metro (about) possibly using some of those facilities.”

You can learn more about DC Public Restrooms and the Law 22-280 implementation here.

Sarah Payne is a general assignment reporter for Capital Community News. She can be reached at sarahp@hllrag.com.