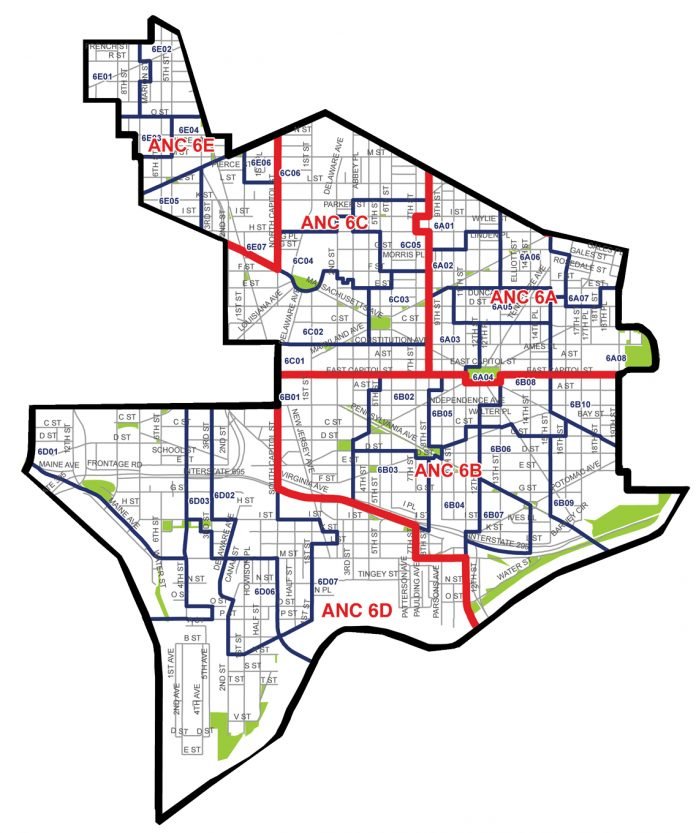 Bryant said MPD received a call the afternoon of the ANC meeting, reporting sounds of gunshots near the school. She said officers recovered one casing, but found no victims. The casing is being submitted to forensics to determine if the firearm that it came from was used in another crime.

Commissioner Denise Krepp (6B10) called the commander the same afternoon. Krepp said that a neighbor heard the gunshots and watched the kids scramble. “Our kids, DC kids deserve to be in a better environment,” Krepp said.

The gunfire comes only ten days after a death near Eastern High School. A man was found unconscious but breathing, face down on the fields near the school. He later died.

Bryant said at the time, officers weren’t sure how he was killed; neither acoustic detection system Shot Spotter nor residential cameras recorded any clues. Bryant said the man was stabbed in the face with a blunt object. There may have been a dispute between the man and others that led to his murder, Bryant said, noting that police may have found a witness since the event. Krepp offered to write a community impact statement.

Bryant noted that carjacking numbers are actually down overall versus the same time in 2020, adding that any number was unacceptable.

Commissioner Jennifer Samolyk (6B01) noted that at their April meeting, Attorney General for DC Matthew Graves told commissioners that DC Council is in the process of reevaluating the DC Code. One proposal is to eliminate carjacking as a standalone offence. Carjackings currently come with a seven-year mandatory minimum; armed carjackings have a 15-year minimum sentence. The proposal is to treat these as robberies, which would reduce the associated mandatory minimum prison sentence. USA-DC plans to oppose the move.

Samolyk expressed concern about this change and asked Bryant for the MPD position on the issue. Bryant said she had some concerns about the changes, saying that even young people should be held accountable for their crimes. But there’s a difference between a seasoned criminal and a juvenile who doesn’t understand the crime they commit, she added.

“I don’t want the penalty for a kid who sees a vehicle running and takes it to be the same for one who beats up a citizen,” Bryant said. “That’s not the kind of penalty we want to see.”

District Department of Transportation (DDOT) Safe Routes to Schools lead Gina Arlotto told commissioners about a pilot program that would close a portion of streets in front of schools to vehicles. The pilot program would take place at one school in each ward on bike-to-school day, scheduled this year for Wednesday Oct. 12. In Ward 6, the pilot school selected is Watkins Elementary (400 12th St. SE).

Arlotto said plans currently call for closure of 12th Street between D and E Streets SE. Hours have not been finalized. The street may be closed for a few hours around drop-off and pick-up, Arlotto said, or it could be closed for the duration of the school day, in which case DDOT will program the space.

The pilot comes after DDOT observations throughout the District showed that the block in front of schools is the most dangerous space for a child as they enter and leave.

The goal of the pilot program is to allow for safer transport on a critical day and to promote the use of alternative modes of transportation. DDOT will also raise awareness for neighbors and commuters about safety and hand out materials on safer drop off and pick-up procedures.

The program has general support from DC Council and the Mayor’s office, Arlotto said, and may make it into city-wide legislation implementing it on the first day of school over the next couple of years.

Some commisioners said that while they supported the idea, they thought the plan would simply decentralize chaos from the front of the school to the corners. Commissioner Kirsten Oldenburg (6B04), who lives across from Watkins, said promoting student safety is a great idea, but a better idea would be to help parents conduct drop-off and pick-up safely.

Arlotto said the pilot may mean some inconvenience for motorists, but said DDOT feels very strongly that the idea, used in many European cities, is worth taking a look at and to see if it can be expanded more widely in the coming years.

The ANC Voted to Support

• An Historic Preservation Application (HPA) for new construction of a three-story townhouse with basement on the vacant lot at 1107 Tenth St. SE. Neighbors expressed some concern about the absence of an outlet to the interior alley behind the lot; the applicant noted that his construction would not affect access but agreed to continuing conversations among neighbors who abut construction as an opportunity to address the issue.

• Changes to a planned unit development (PUD) at 1333 M St. SE. There will be a reduction in retail space and an increase in residential vehicular and bike parking. The ANC asked the applicant to increase electric charging in parking spaces past the required minimum of 1 for every 50 units, commit to having 20 percent of parking spaces electric vehicle ready and to increase the space for cargo or tandem bikes,. Commissioners reiterated support for the project overall but argued that while District regulation on these items is in its infancy that such planning would help facilitate a decrease in driving and would be a selling feature for residents.

• An application from Brent Elementary School (301 N. Carolina Ave. SE) for School Parking Zone (SPZ) permits. The SPZ program allows school staff to park in identified Residential Parking Permit (RPP) zones during daytime hours and must be supported by a transportation coordinator and school transportation plan. The measure is intended to replace the widespread neighborhood donation of Visitor Parking Permits (VPP) to school staff, as those can be used at any hour and are unlimited. There was some debate amongst commissioners about the actual number requested by the school, but support was assured when it was determined that only 38 of the 65 staff were to be allocated a pass.

• The DC Circulator Plan for an East Capitol Street Route. The new route will proceed west from RFK Stadium along East Capitol to Third Street NE, proceeding up to Union Station and then return along the same route, connecting Ward 7 to Union Station. However, neighbor John Hirschmann pointed out that there were no stops between Eighth and 17th Streets and asked commissioners to include a request for stops near Lincoln Park. The ANC supported the plan and made the request for additional stops.

ANC 6B holds their next full meeting Oct. 11, with executive and committee meetings taking place during the two weeks prior. Learn how to attend meetings and connect with the commission by visiting anc6b.org.

Join Action Calling for Internet for All