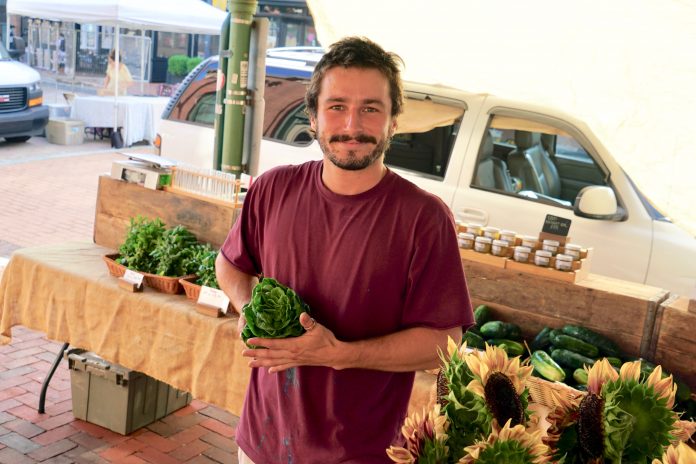 Lincoln Norton grew up on Capitol Hill and his first memories are of the Eastern Market.

“The Market is part of me,” he says, reflecting on the non-traditional path that has taken him from little boy getting a banana at the market to teenager with an after-school and weekend job at the cheese stand, to young man selling organic produce he has helped raise in the farmers line outside—all these experiences interrupted by long periods traveling back roads across the country, living alone in his truck, reflecting on what he really wants.

“It’s a community where you know everyone,” he says of the Market.  “It’s my community and I keep coming back.”

Lincoln went to elementary school at Watkins and at Holy Trinity in Georgetown, attended church at St. Mark’s (where, full disclosure, the author of this article taught him in Sunday School). He was high energy—skate-boarding “down every alley and street in this town.” When the time came for high school Lincoln chose to go to DeMatha, less for academic reasons than because he wanted to play ice hockey, which he did. He still remembers ruefully the loss to Gonzaga of the championship game his senior year. “The worst day of my life,” he laments with a laugh.

For college he chose the University of New Hampshire so he could be close to his then girlfriend.  But when they broke up he realized he wasn’t interested in his classes and didn’t enjoy the college scene.

He was reading Jack Kerouac and John Steinbeck at the time and so decided to quit school and go on a road trip.  Working for farmer Hunter Hayes, one of the many friends he had made at the market, and living at his farm H3O in Locust Hill west of Fredericksburg, Lincoln saved his money, bought an old pick-up truck, fixed it up so he could sleep in it, and took it on the road.

He spent nine months looping down through the South, discovering the Southwest, driving up route 101 along the California coast, stopping along the way to surf whenever he could and to work construction when he needed money.  For several months he lived and worked in Portland.

COVID hit during his travels, making college seem even less appealing.  But after two years, some of it back working on his friend Hunter’s farm, Lincoln decided to give higher education another try. He chose Evergreen, a non-traditional college in Olympia, Washington, a school that is in a part of the country he loves and that was happy to accept him.

But as he was registering for classes and saw that most of them would be on line, he had a moment of clarity.  “I just can’t do that stuff,” he remembers thinking.  On his first day there he withdrew his application.  “And suddenly,” he says, “I realized that this is not a gap year.  This is my life.”

There was more wandering to come including a winter in Florida painting “tacky tourist signs” with “an old beatnik” and catching lots of good waves.  There was a return to Hunter’s farm and a growing realization that something about farming speaks to him.  He loves working outside; he likes growing the food that people need. He enjoys nurturing baby gingerroot and growing hardy vegetables.  “I like things that are not going to break,” he says.

And he wants to truly understand what makes things grow better and why. So for now, Lincoln spends weekdays weeding, seeding, planting at the farm in Locust Hill.

“We hand harvest every bunch of parsley we sell,” he says, “every zucchini.”  He looks forward to the weekend when, despite getting up at 5 a.m., it seems to him the “relaxed time” when “everything I worked for all week is out on display.” He enjoys the solitary drive up to DC, setting up with the other farmers, and then chatting with customers, selling them the food that they need, explaining the CBD products he and Hunter make for pain relief, having the bunches of sunflowers and bright zinnias people love.

Come September he’ll be on the road again, heading down to Florida with plans to get “random work if I need it,” to sail to the Bahamas with a friend. And in January Lincoln plans to check out the agricultural apprenticeship in organic farming at the University of California at Santa Cruz, a program that offers ten weeks of experiential study of soil health and cultivation, exactly the things he wants to understand and, as it happens, in the very place that has the best waves for surfing that he has ever seen.

Thinking about what he has done so far, Lincoln admits that much of his journey has been solo and that it sometimes gets lonely.  “But it’s what I needed,” he says remembering long hours   by himself, driving, thinking, trying out figure out why people are the way they are and do what they do.

He’s considered the contrast between the independence and freedom of life on the farm and the joys of life in community.  He has been inspired by some of the “old guys” he’s met, by the books he’s read.  He’s kept a journal of his reflections.  And he’s come to feel a sense of confidence that in the time to come he’ll be guided by something he can’t name, a force some call God, or which may be simply getting into the flow of the universe, much like catching the perfect wave.

In the meantime, though, there’s at least one more Capitol Hill walk to take, this one with his sister Rose to the house where they grew up and with a piece of their mother’s peach pie at the end of it. And after that, another weekend at the market to get ready for.

Visit H3O farms at Eastern Market every weekend or at www.h3ofarms.com.