Meet Milton, Capitol Hill’s self-proclaimed “Top Dog.” As a 16-year-old elder statesman (112 in dog years), he firmly believes that his age and experience entitle him to some respect. And he’d be the first to tell you so!

In “Milton,” author Linda Bowles tells the story of a feisty one-eyed Jack Russell terrier with a rakish eyepatch who comes to stay with her when his family goes on vacation. “They went to Florida,” he huffs. “I went across the river to Virginia. WHAT???” 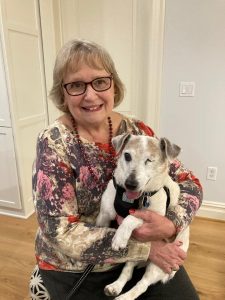 At first, Milton suffers from a little separation anxiety, but he eventually makes himself at home—although he is by no means the perfect houseguest. He crowds his hostess to the edge of the bed and stubbornly stiffens his legs when he gets tired of walking. And then there was that little accident. “When you gotta go, well, you gotta go!,” he breezily offers by way of explanation.

Charmingly illustrated by artist Julia Gonzales, “Milton” is a funny and engaging story for kids and for anybody who has taken a dog into their lives—and their hearts. Bowles says that having Milton as her houseguest was frustrating at times. “He was like a cantankerous old man, set in his ways and not about to change them.” But, as in the book, she had a little tear in her eye when his Capitol Hill family came to pick him up. “Milton remains in my heart,” she writes, “as a very special little guy.”

Linda Bowles is a retired R.N. who lives in Northern Virginia. “Milton” is her first book, but, happily, she’s planning a follow-up.

To say that Clara Cassidy has a game plan would be something of an understatement. The Pasadena high school freshman and viola virtuoso has her future all laid out: first, the Los Angeles High School for the Arts, then on to Julliard, and eventually a chair (preferably first) in a symphony. In the meantime, though, she’s grappling with a new school, a celebrity father who hogs all the attention, a stepmother she resents, and worrisome questions such as what people do with their noses when they kiss.

In her new novel, “Girl, Unstrung,” Claire Handscombe tenderly probes the angst-ridden ups and downs of being an accomplished but unformed teenage girl. “It’s too complicated, and too uncomfortable, all these different emotions,” says Clara, who chooses instead to keep her emotional distance by being angry—except that “it’s exhausting being mad all the time.” Then there’s the problem of boys—or, actually, of one boy in particular. Tim, with his swoopy hair, begins to make inroads into her well-protected heart, but Clara puts her foot down. “I’m not going to be that pathetic pining stereotype of a teenage girl,” she asserts. “I’m better than that.” 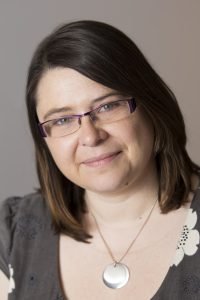 Alas, as they often do, her best-laid plans take a tumble, forcing Clara to reassess her priorities and open herself up to new possibilities. Slowly, “the  forcefield of protection” she has erected around herself begins to crack, allowing her to envision a new way forward. And she even gets the answer to one of her burning questions.

“Girl, Unstrung” is an insightful and entertaining coming-of-age story filled with a lot of heart, humor (including Dad jokes), and love. Handscombe has done a masterful job of embodying a teenager’s growing pains in the character of Clara, whose future may not be what she imagined but whose success as a fully realized human being is almost certainly guaranteed.

Claire Handscombe is the author of a previous novel, “Unscripted,” and the editor of “Walk With Us: How ‘The West Wing’ Changed Our Lives.” A native of the UK, she hosts the Brit Lit Podcast, works at East City Bookshop, and can be found on Twitter @bookishclaire.

Andréa Seiger not only knows all the curious corners of DC, but she also can entertain you with endlessly fascinating stories about them. In “111 Places in Washington That You Must Not Miss,” she goes beyond the usual tourist sites to explore the quirkier side of the nation’s capital. Did you know that the REI store on the site of the old Uline Arena has a concert corner commemorating the Beatles’ 1964 concert there? Or that DC is home to the nation’s oldest continuously operating miniature golf course?

Those and 109 other fascinating entries—from the Art-o-Mat installation at the Smithsonian American Art Museum to the Waldseemüller Map at the Library of Congress—are presented in an easy-to-digest format, with an informative essay on one side and a gorgeous image by photographer John Dean on the other.

Many DC icons make an appearance—Mumbo sauce, Chuck Brown Park, the Big Chair—but Seiger gives an interesting twist to even the more familiar landmarks. The entry for Planet Word, for example, focuses on the goofy puns that grace the restroom walls. And the Iron Gate Inn write-up is all about a Soviet double agent who was exposed after he was lured there by a prostitute. 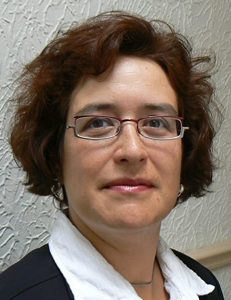 On Capitol Hill, Seiger directs visitors to John Philip Sousa’s house (she includes a tip about Friday evening parades at the Marine Corps Barracks), points out the allegorical Bartholdi Fountain at the base of the Hill, extols the blueberry pancakes and crabcake sandwiches at The Market Lunch, and gives props to Peterbug Shoe Academy (noting in her tip that The Pretzel Bakery is nearby).

All told, it’s a whirlwind tour that more than lives up to Seiger’s description in the foreword. “DC is the seat of world power,” she writes, “but the city itself has a distinct funkiness, charm, and coolness.” She invites readers—and explorers—to find their own stories, and, with “111 Places,” she’s given them a terrific head start.

Andréa Seiger is a world and domestic traveler who “has worked in nearly every business involved in tourism and hospitality.” She has lived in DC for more than 30 years and claims “it is my business to know my city.” Find her on Instagram @urbansafaridc111.