“Abortion is healthcare”, “my body my choice”, “abortion rights are human rights” and many other messages were chalked onto the bricks of Blagden Alley NW Sunday afternoon.

Nearly 100 people, many of them children, came to chalk messages, blow bubbles and listen to music together after the United States Supreme Court overturned Roe v. Wade and ending the decades long right to abortion in the country.

Thousands of people have taken to the streets to protest the decision. One mother took her kids down to the protest in front of the US Supreme Court building, chalk in hand. When she got there, she said, she was questioned by the police, who she said threatened to arrest her.

“When I start doing chalk with [my kids] and other people who want to join, [then] the police, they always start hassling us right away about stopping,” she said. “When the decision was announced I was down there with my kid and the cops were very verbally aggressive towards me and threatened to arrest me in front of my child.”

While the woman said she was not arrested, she and another mom wanted to help create a safe space for community members to bring their children. That’s why they planned the event to chalk the sidewalks of Blagden Alley.

Robert Goldberg, President of the Blagden Alley Naylor Court Association (BANCA), emphasized the importance of community during this time which was the goal of Sunday’s event.

“It’s about bringing people together,” Goldberg said of the event. “We are all community members and that’s important.” 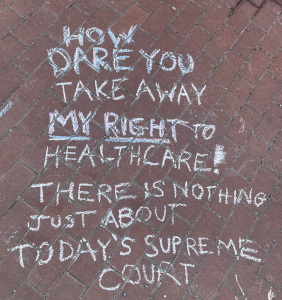 Amanda Gore, a resident of Blagden Alley, said she recently became involved with the BANCA and attended the event to get together with the community.

“Luckily we live in DC so we live in an area where we can have these conversations and it’s comfortable and we’re kind of all on the same page,” Gore said. “To come to a neighborhood event where this is kind of the focus and it’s family friendly, obviously I’ll be there.”

Julie Powell also attended and emphasized the importance of having an outlet during this tumultuous time.

“I think a lot of people are looking for an opportunity to express their feelings,” Powell said. “The chalk at this moment gives them the voice that they didn’t know they needed. People picked up that chalk and they were surprised by what came out of their hearts.”

She said when she picked up the chalk she didn’t know what to expect.

EMCAC Report on Operations and Use of Seventh Street SE