The driver of a black sedan bearing Maryland plates turns south from I Street SE onto First and stops. After a moment, he gets out of the car. He stands on his running board to look over at the empty curbside lane, separated from his car by a row of flexposts and barricaded at each end by a large metal planter filled with flowers. “What’s this?” The man asks a pedestrian walking his dog, gesturing at the empty lane. “Can I park here, or what?”

The answer, according to signs posted by the District Department of Transportation (DDOT) is no, he cannot—not in the empty spaces next to the curb. But neither the driver of the black sedan nor the dog-walking pedestrian, who shrugs in reply, are clear on the use of the space. The curb spaces are blocked along First Street between I (Eye) and M Street and continuing for a block on Potomac Avenue SE. Along these stretches, cars are parked in a row between the travel and bike lanes.

“Residents are always complaining about it, not even just our residents; residents from SW, from other places,” said Advisory Neighborhood Commissioner for the area Edward Daniels (6D07). “They just ask, what’s up with First Street?”

DDOT said the curbside spaces are intended as “pedestrian activation zones.” They have the familiar shape of COVID-era streeteries. But there are no restaurants along these blocks of First Street, and there is no furniture in those spaces.

So what is going on along First Street? Why is space originally meant for parking now closed and basically useless.

Taking Up Space on the Street
In 2008, First Street SE was rebuilt as part of a DDOT streetscape project around the construction of Nationals Stadium, located at the intersection with Potomac Avenue. The 2008 design included curb bump-outs, which allowed pedestrian sight-lines past the curbside parking. It also included unprotected bike lanes alongside four lanes of travel.

That was far too many lanes for the volume of traffic, said DDOT Director Everett Lott. The extra lanes encourage speeding, Lott said. They also create confusion and conflict on roadways, particularly for pedestrians. That’s especially true at four-way stops, four of which are located within three blocks of First Street. “So, as we looked at converting the unprotected bike lanes to protected bike lanes, we also wanted to reduce the number of travel lanes to two, one in each direction, to calm traffic and improve safety,” Lott said.

The opportunity came in 2019, when DDOT initiated a First Street – Potomac Avenue Safety Study. The study resulted in a revised road design.

Protected bike lanes were added along four blocks of First from I Street to Potomac Avenue SE and down Potomac to South Capitol. The bike lanes are separated from car travel lanes by flexposts and a parking lane. Travel lanes were reduced from four to two. And the former curbside parking lane was to be cut off from vehicles completely, bracketed at intersections by the curb bump outs and fenced from the road by flexposts.

Incomplete Project
But, although it is blocked off, the space has never been permanently occupied by anything more than the planters. That has led to confusion, said Commissioner Daniels. Drivers run over the flexposts and concrete barriers, traveling through the protected bike lanes to park illegally at curbside.

“So obviously that’s creating hazards with the bike lane and any pedestrians that are in that curb space,” Daniels said.

That’s a big problem, because the plan was for people to be able to sit in those spaces and enjoy them. The 2019 plan was for the curbside lane to be cut off from traffic and designated “pedestrian activation zones.” Daniels said that when the ANC voted to support the project they did so with the understanding that DDOT would convert the spaces, adding greenery, benches and tables. “Those are the part of the puzzle that they haven’t completed,” Daniels said.

It doesn’t look like the puzzle will be solved anytime soon, either. The 2020 DDOT presentation to ANC 6D indicated that DDDOT would “partner with Capitol Riverfront to activate the space in phases,” from planters and paint to furniture and programming, finishing with construction to bring the parklets to sidewalk level. 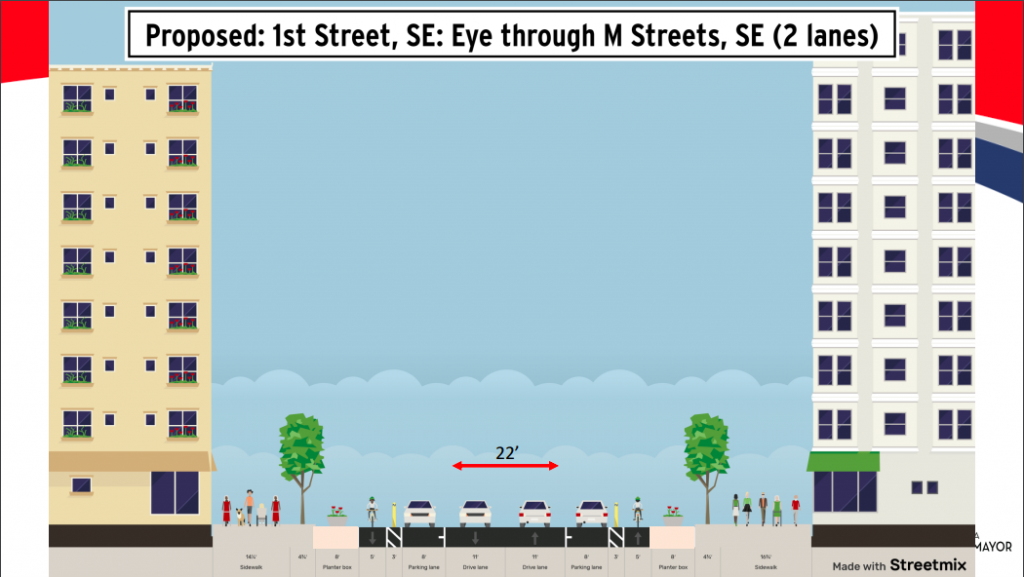 DDOT Director Lott said that the agency had discussions with the Capitol Riverfront BID. “They were interested in using the original curbside parking lanes as “pedestrian activation zones” for parklets and possibly for restaurant seating,” Lott said. That plan has taken time to develop due to the COVID pandemic, he added. “The unfortunate by-product was that the curb lane remained open and unused in some locations, and some drivers use it as a place to park.”

Unworkable Solutions
The pandemic might have delayed the activation of the curbside spaces, but the Capitol Riverfront BID says there’s another problem holding up their participation: money. BID President Michael Stevens said the organization was interested in programming those spaces, but two factors have made it “somewhat unworkable for them to move forward now.”

First, he said, there is a lack of any additional funding from DDOT for programming or maintaining the spaces. “We have been very clear with DDOT that the BID did not have funding for the programming of these spaces–we thought DDOT would provide that funding,” Stevens said.

Additionally, there is a required buffer zone next to the bike lane that makes it very difficult to program the space in any meaningful way, Stevens said. Furniture and planters have to be ten feet away from the bike lane, limiting the size of furniture and the way the space could be used.

“If the use of the space were more flexible, then we would possibly be able to work with adjacent property owners to put funding together for further activation,” said Stevens. As is, the BID cannot commit to programming or managing the space.

The BID has installed landscape planters and seating in two of the blocks, using DDOT funds, and the BID has budgeted some funds for the maintenance of these planters. The planters are intended to deter parking, Stevens noted, but drivers have moved them or found other ways to navigate around them.

“With that said, we do hope to work with DDOT to at least do painting in those spaces,” Stevens said, “and ensure that DDOT installs appropriate and effective signage to make it clear that those are not parking spaces and that vehicles should not be in those zones.”

Daniels said that the Department of Public Works (DPW) has been reluctant to ticket drivers in the curb-adjacent lane, citing a lack of clarity in signage. “They [DPW] say, “the signs do say parking. It doesn’t say parking at the inner curb or the outer curb,” Daniels said. The Commissioner continues to report cars parked in the lane via 311, but rarely does it result in ticketing. “I’ve had so many closed tickets where they say ‘no violation,’” he said

The commissioner said he’s had discussions with DDOT about the danger of leaving this project incomplete. During a recent meeting with ANC 6D commissioners, DDOT Deputy Director Sharon Kershbaum acknowledged that the project was incomplete, Daniels said, but declined to commit to a date by which it would be finished.

Daniels says during the meeting of the ANC and DDOT he told the agency that the First Street project needs to be finished before the confusion leads to a serious injury —or worse.

“It something happens, I honestly am going to blame you all,” was his message to DDOT. “This is your project you left incomplete, and it’s a breeding ground for an accident to happen.”

You can see the presentation DDOT made to DDOT in 2020 on the 1st Street/Potomac Avenue Safety Project Presentation at: https://www.anc6d.org/wp-content/uploads/2020/06/10.b.-1st-Street-Potomac-Avenue-SE-presentation-to-ANC-6D-20-5-4.pdf.