“Never shall I forget my tortured feelings when I beheld that noble edifice wrapt in flames,” wrote a horrified Dr. James Ewell in 1814. The local doctor was a witness to the torching of the US Capitol by departing British troops, who left a smoldering path of destruction in their wake.

Lest recent events tempt us to believe that our times are unique in DC history, Edward P. Moser is here to set the record straight. “Since the start of its construction 230 years ago,” he reminds us, “the Capitol has witnessed an astonishing amount of turmoil, bloodshed, and controversy.” 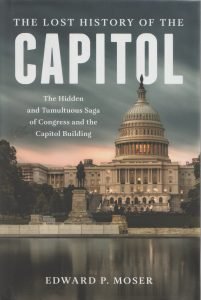 In “The Lost History of the Capitol: The Hidden and Tumultuous Saga of Congress and the Capitol Building,” Moser tells more than thirty stories of duels, canings, riots, bombings, assassination attempts, and bootlegging—all of which took place in or near the Capitol.

Among the highly dramatic accounts are the 1835 beating of a congressman by ex-senator Sam Houston; the 1890 shooting death of a former representative by the beleaguered reporter whom he had “bullied, browbeaten, and outright beaten”; and the 1954 assault on Congress by Puerto Rican separatists, which left five representatives wounded.

While Moser acknowledges that the insurrection on January 6 “ranks among the wildest events in the building’s more than two centuries of existence,” he describes another deadly riot that took place on election day in 1857, when two gangs supported by the anti-immigrant Know-Nothing Party—the Plug Uglies from Baltimore and the local Rip Raps—tried to disrupt the vote. The president called out the Marines, who eventually prevailed, but not before “eight to ten people lay dead or fatally wounded, and twenty to thirty others were wounded.” All were spectators.

“A locus of so much power and wealth inevitably leads to considerable bad along with the good,” writes Moser. As the defining symbol of our neighborhood, the Capitol embodies all the beauty, richness, idiosyncrasy—and occasional ugliness—of our nation itself. “The Lost History of the Capitol” is an entertaining introduction to the many stories it has to tell.

Edward Moser is a historian, tour guide, and author who served as a speechwriter for George H.W. Bush and editor of Time-Life Books. His previous books include “The White House’s Unruly Neighborhood” and “A Patriot’s A to Z of America.”