“It was my life’s work,” Tom Rall said, speaking of the Flea Market at Eastern Market, which he helped establish and expand. “To me it means relationships with hundreds of wonderful people, going back through dozens of years.”

You probably know Tom Rall, even if you don’t know you do. He is the man in the hat, the Eastern Market seller who until last December could be found every weekend on Seventh St. near Pennsylvania Ave. SE behind a table full of antique maps and prints.

But don’t let his place at the end of the street fool you. Rall helped give the market a new beginning. For more than 35 years from 1984 to 2011, Tom Rall organized Sunday vending near Eastern Market, bringing vendors from all over the country and the world to Capitol Hill and changing the nature of the market and the neighborhood. His work would help found multiple businesses and impact many lives.

But, he said, the biggest impact was on his own.

Coming to DC
Hailing from Middleport, Ohio, Rall graduated from Kent State in 1969. A conscientious objector, he came to DC to take an alternate service position with the United Methodist Church, leaving behind a career as a journalist. He moved on to work with the Southern Christian Leadership Conference (SCLC), later working to organize a union at the State Department.

Later, Rall turned to the antique business, finding treasures in the Shenandoah and selling them at urban venues like the Georgetown Flea Market. In 1978, a Capitol Hill friend asked him to do a benefit auction at Market 5, the gallery managed by John Harrod in Eastern Market’s North Hall.

After that success, Rall began regular Saturday auctions at Market 5, until in 1983, Harrod asked him if he wanted to begin selling his antiques on Sundays.

Rall found he was often the only Sunday exhibitor, so he asked Harrod if he could manage the Sunday markets for him. Harrod told the Capitol Hill History Project in 2009 that the two made a deal and shook hands on it.

“That was a 20-year handshake. Two guys lost in the ’60s!” Harrod laughed, recounting the moment. “And you’ve seen what he’s done.”

Founding The Flea Market
That began some heady days. Rall named his enterprise The Flea Market at Eastern Market and immediately began to advertise the market and recruit vendors. Within two or three years, the Sunday Flea Market filled the North Hall and the open spaces under the farmer’s canopy and started to wrap around the market on C Street SE.

Rall and his vendors lived their lives at the market; in 1988, he and his wife, Debbi, were married in the North Hall. Their children were market babies, spending weekends playing with one another between tables and stalls, recalls Tom’s son, Brady. “There’s a handful of us second-generation kids who grew up here on the weekends.” 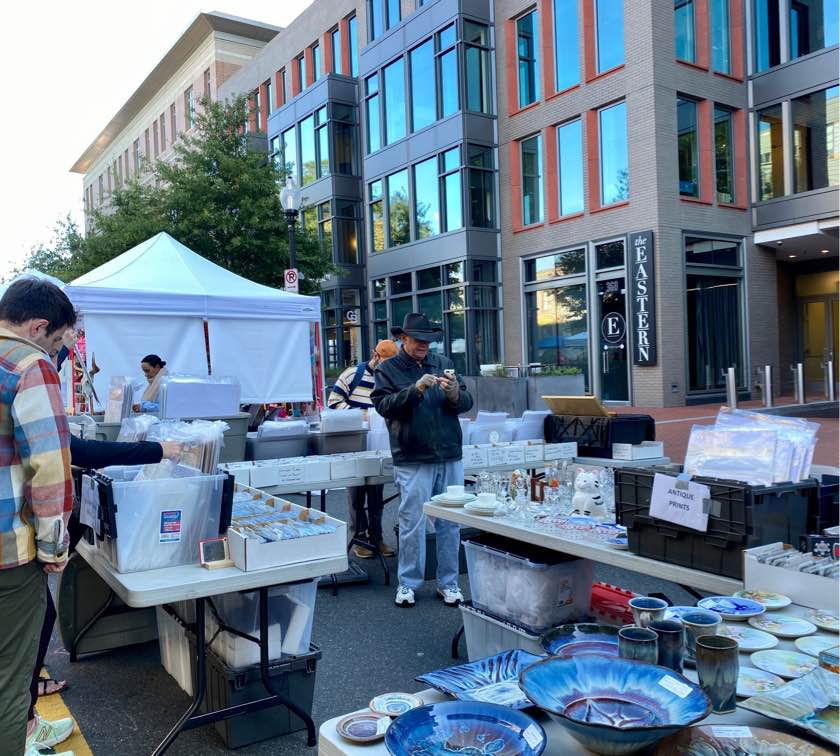 ”Overall, those were great years,” remembered Pat McCarthy. She and her husband, David Mahajan, own Kashmir Boutiques (760 C St. SE), but they got their start selling garments from the Kashmir region at the Sunday Flea Market, now right outside their doors. “Attendance was always shoulder-to-shoulder and vendors did very well,” remembers McCarty. In addition to Kashmir Boutiques, other local businesses that incubated at the Flea Market include Silk Road and Chateau Animeaux, which under current ownership became Howl to the Chief.

Shake Up
Soon, the lively Sunday markets began to draw the attention of the Eastern Market managers. Until 1991, the market itself, operating out of the South Hall, had been closed on Sundays; now, with so much going on, they decided to open all weekend.

When the market opened on Sundays, the farmers began to sell on Sundays too. That meant a shake up; Rall had to find space for those of his vendors displaced from under the farmer’s canopy or blocking entrances to the building.

Rall approached Principal Princess Whitfield of Hine Junior High School, located between 7th and 8th streets on Pennsylvania Avenue SE, asking if the Flea Market could lease the parking lot on Sundays. Whitfield agreed and so Rall’s Flea Market would happen at Hine for the next 26 years, until it was surplanted by development in 2015.

In 2004, Rall officially asked Berman to help him run the markets, and the two formed Diverse Market Managements (DMM). They organized the downtown Holiday Market and later markets in Crystal City, Penn Quarter and Southwest. By 2007, Rall said, DMM was managing 200 exhibitors at the Eastern Market alone, and seeing as many as 20,000 people a day walk through the market.

“It wouldn’t be here without him,” Berman, who is now the President of DMM, said of Rall’s influence on the market. “He was instrumental in keeping it alive, expanding it and bringing in new businesses to a community of artists and vendors that would not exist without him.”

Scheeder said that Rall played a key role in creating the personal experience central to the experience of shopping at Eastern Market. ”Tom is a great example of fostering that that sense of community,” Scheeder said. “Although the Hill has undergone substantial gentrification since I moved here in 1970, the market has kept its character and that is partly due to the work of Tom.”

Through the Fire
On a cold day in April 2007, Hill residents woke to find out the Eastern Market building had burned nearly to the ground. The fire devastated the building and reshaped the markets around it.

When the newly-renovated market building reopened in 2009, the city had taken over market management. Going forward, the Department of General Services (DGS) would manage the indoor merchants and the North Hall. That meant the end of the lease with Harrod and of Market 5, and an end to the arrangements Harrod had organized with the flea markets, including those Rall organized on the plaza around the market building.

Rall still has feelings about the loss of part of the market he founded. Now, although over the years he has developed a friendly relationship with market management, he wonders if he should have fought harder. “It was my life’s work,” he said, “and the city took it over without any compensation.”

But that market continues to flourish, said Eastern Market Manager Barry Margeson, crediting Rall and John Harrod. “Together, they built a community of the most diverse people that anyone could find; good people who work together and understand how our differences can create strength and vibrancy,” Margeson said. “That vibrancy remains a hallmark at historic Eastern Market today.”

DMM continued to operate a market on the Hine playground, moving onto Seventh Street SE in 2015 when construction began on the development that currently occupies the block. Upon completion in 2017 they moved to the privately-owned C Street SE Plaza, where they can currently be found Sundays from March to December.

Rall sold DMM to Berman in 2011, taking a place on the board of the company and returning to vending on the street.

Rall Over the World
Though Tom is retiring, there will still be a Rall at Eastern Market. Sure, you can find Rall Sr. at Tunnicliff’s Tavern most Sundays, where DMM holds board meetings over brunch. But the vending tradition continues. Brady Rall will continue his father’s work this season, selling antique prints and maps from all over the world.

In his 2009 interview with the Capitol Hill History Project, Rall said that some vendors were so devoted to the exhibitor community that they literally worked the market until their last week of life. “And I had been hopeful that I would be able to do that,” he laughed.

But now, in 2022, Rall says he has “a bucket list to get to.” There’s one state (Hawaii) and two or three continents he hasn’t been to; he’d like to increase the time he spends in Jamaica from two weeks to a month every year; and he wants to spend more of his time in museums and theaters.

For nearly 40 years, Tom Rall brought the world to Eastern Market. Now, it is time we give him back to the world.