Robert “Bob” Staples, resident of Capitol Hill for forty-eight years, died on November 30, 2021, at the age of eighty-eight. Staples was a student at the University of Southern California in 1957 when his industrial design professor insisted that he pursue an opening at the Office of Charles and Ray Eames. Initially reluctant, as he had a good job drafting airplane parts, Staples showed his portfolio to Don Albinson, senior designer at the Eames studio, and was hired part-time, as Staples would say, “to carve patterns and sweep the floor.”

A year later, Staples abandoned his formal education to work full time in the intense studio environment, quickly learning the Eames’ methodology of decision making and obsession for details. Staples often described carving the first wooden pattern for casting the “antler” (support) under the seat of the Herman Miller Aluminum Group chair and reviewing it with Albinson and Charles Eames. And, then a second, and third, and fourth—eight antlers in total, each with slight requested modifications. Having gone full circle, the first antler pattern was selected. By 1961, Staples was the senior three-dimensional designer responsible for the development of Tandem Seating to be introduced at Dulles Airport in 1962. It is still in production and used in airports worldwide. Staples shares the technical patent for Tandem Seating with Charles Eames.

Beginning with Mathematica in 1961, the focus of the Eames Office was increasingly on exhibitions. Working on Jawaharlal Nehru: His Life and His India was a transformative experience. Staples was sent to the National Institute of Design in Ahmedabad, India, in October 1964 to deliver photographic equipment and bring back drawings for the exhibition to be fabricated in the US for a late January 1965 opening in New York City. The ten-day trip expanded to ten weeks when the decision was made to build everything in India and Staples, together with Kumar Vyas, design professor at NID, orchestrated the final designs and supervised production by myriad Indian craftsmen. Staples was lead designer for Photography and the City at the Smithsonian (1968), Computer Perspective at IBM in NYC (1971), and concept designer for Franklin & Jefferson, before leaving the Eames Office after sixteen years to start his own firm, Staples & Charles Ltd. on Capitol Hill with Barbara Fahs Charles, also an Eames alumna.

Staples & Charles Ltd., interpretive planners and designers for museums, was launched in August 1973 in the third-floor apartment above what is now Tunnicliff’s Tavern opposite Eastern Market. A few months later, the studio and Bob Staples and Barbara Charles, personally, relocated to 510 11th St. SE, around the corner from Frager’s Hardware, then still owned by the Frager brothers George and Julius. As the studio expanded throughout the townhouse, Bob and Barbara restored and moved to 214 4th St. SE in the early 1980s, where they lived for thirty years. In 1995, when still more space was required, Staples & Charles Ltd. took over an old warehouse in Alexandria, while Bob and Barbara continued to live on 4th St. SE.

Staples & Charles Ltd., one of the earliest studios to specialize exclusively on designs for museums, worked initially on Smithsonian projects, but quickly expanded nationally and internationally. The office was never large, and Staples was always hands-on as the lead three-dimensional designer, testing elements out in his shop and producing beautifully thought-out drawings for fabrication for such projects as the World of Coca-Cola in Atlanta, The Sixth Floor in Dallas, the South African World of Beer in Johannesburg, the reinstallation of virtually all of the Detroit Institute of Arts, and the Visitor Center and mountaintop interpretation at Monticello. Two of his later projects, echoing back to his years of furniture design, involved rethinking Louis Kahn’s “demountable museum walls” to retain their aesthetics, yet significantly improve functionality, first for Yale University Art Gallery, then for the Yale Center of British Art, Staples’ last museum project.

In 2007, Bob and Barbara bought the small commercial building with a balcony at 731 8th St. SE on Barracks Row, with the idea of creating a fourth-floor apartment with an elevator for senior living and studio space on a lower floor. Staples worked closely with Andrew Singletary of SiRu Architects on the overall building concepts, while executing the interior designs himself. After five years of historic preservation and zoning reviews and construction delays, June 1, 2012, became move-in day for both Staples & Charles Ltd. and Bob and Barbara personally. The apartment, a testament to Staples’ design philosophy, was a surprise hit of the 2016 Capitol Hill Restoration Society House and Garden Tour.

Beyond design, Staples had a passion and discerning eye for ephemera, which he collected and enjoyed using in exhibitions. The Ephemera Society of America gave Staples and Charles the Maurice Rickards medal, the Society’s highest award. Staples’ collection of over 1300 metamorphic trade cards is now part of the Library Company of Philadelphia.

Robert Staples is survived by Barbara Fahs Charles, his design partner and wife, who continues to live on Barracks Row, and by his daughter, Samantha Elizabeth Chambers, and granddaughter, Casey Marlene Chambers, both of Cedar Lake, Indiana. 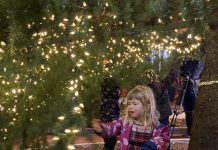