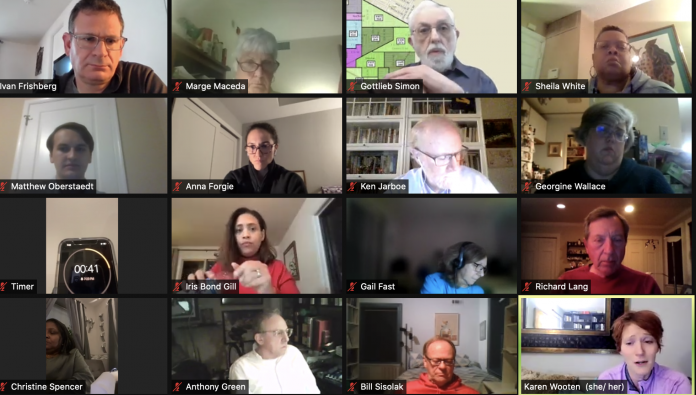 On Feb. 22 the Ward 6 Redistricting Task Force convened for the third time via Zoom to discuss plans for the upcoming redistricting of the District and to take public comment.

The taskforce has been charged by Ward 6 Councilmember Charles Allen (D) with drawing the boundaries of the ward’s Advisory Neighborhood Commissions (ANCs) and their component Single Member Districts (SMDs).

SMDs must contain between 1,900-2,100 residents by DC statute. In drawing the new map, taskforce members also must avoid splitting census blocks, maintain neighborhood cohesiveness and balance the ward’s population among the ANCs to avoid overburdening any single one.

After releasing a draft map, Chair Ivan Frishberg reported the taskforce had received significant email feedback from residents. Frishberg is hopeful that they will have a new map for discussion next week and vote on a final scheme in three weeks. He encouraged residents to send comments to Ward6RedistrictingTaskForce@gmail.com.

“All of those emails get shared with task force members,” Frishberg said. “People have been looking at them and starting to look at some of those issues.”

Frishberg emphasized that having feedback in writing, whether in the form of an email or through the creation of a new map using the GIS application provided by the DC Office of Planning, is helpful for the task force to reference as they continue to refine their maps.

“The task force members have done a lot of work with that information and it’s really helpful as they are doing detailed map work to refer back to those emails and so if you want to augment what you’re doing tonight with an email, a map or an illustration do that because it will really help their work,” Frishberg said.

Several members of the community and current and former ANC Commissioners voiced concerns regarding minority representation, the relation of SMD boundaries to natural and built features such as parks and community cohesiveness.

“Given our large African American population and 600 plus unit property, this map constitutes a violation of redistricting laws on minority voting dilution,” Williams said.

Matthew Oberstaedt, one of the taskforce members assigned to 6D, told Williams of its commitment to ensure Black residents are well represented.

“One of the things that we have been thinking about this entire time is how can we try to create as many majority minority districts as we possibly could to make sure that non-white communities within Southwest would have adequate representation,” Oberstaedt said.

Williams was informed by a taskforce member that a computer error had left a section of the complex ambiguous, but it is in fact all in 6D02.

Several individuals voiced concerns about the proposed map violating the principle of neighborhood cohesiveness, particularly in relation to public parks. Gail Fast, president of the Town Square Towers Condominium, objected to the Duck Pond being placed in SMD 6D04. She emphasized the park’s centrality to her community.

“There are only 54 snowbird ducks that live and return every summer to the Duck Pond, this is not going to change any of the census demographic,” Fast said. “For the last ten plus years, the last five commissioners have worked tirelessly to get that area historically designated and renovated.”

Bill Sisolak, a former ANC Commissioner and Hill resident of over 50 years voiced similar concerns. He lives in a six-block section of ANC 6C that the draft map moved to ANC 6A. “I believe that this move violates several of the committee’s own redistricting guidelines,” Sisolak said. “Our neighborhood is oriented towards Stanton Park, Peabody school and the community west of the Capitol.”

Commissioner Christine Healey (6C01) called for maintaining the boundary between ANC 6A and 6C at H Street NE. This would keep the U.S. Capitol, Union Station and Stanton Park in ANC 6C.

“Putting these residents in 6A would cut them off from the many issues and concerns of ANC 6C that they shared,” Healey said.

Commissioner Mark Eckenwiler (6C04) asked for the entire map to be redrawn. Union Station “absolutely should be aligned with an SMD to the south or the east,” Eckenwiler said. This is where the vast majority of its users and those impacted by its changes reside, he pointed out.

The timeline for completing changes and proposing final maps is too short, Eckenwiler said. “There have been various comments made about how compressed your schedule is,” Eckenwiler said. “I really think you need to push this past March 15. If you look at the schedules for the other wards, they are holding far more meetings and going out to March 29th or 30th,” he added.

The Redistricting Taskforce will meet again on March 1 at 7 p.m. Read more about redistricting and register to attend the meeting here. The taskforce’s final meeting is on March 15 at 7 p.m. At that time, members will vote on a map to send to Councilmember Allen. Past taskforce meetings and more information on redistricting can be found here.