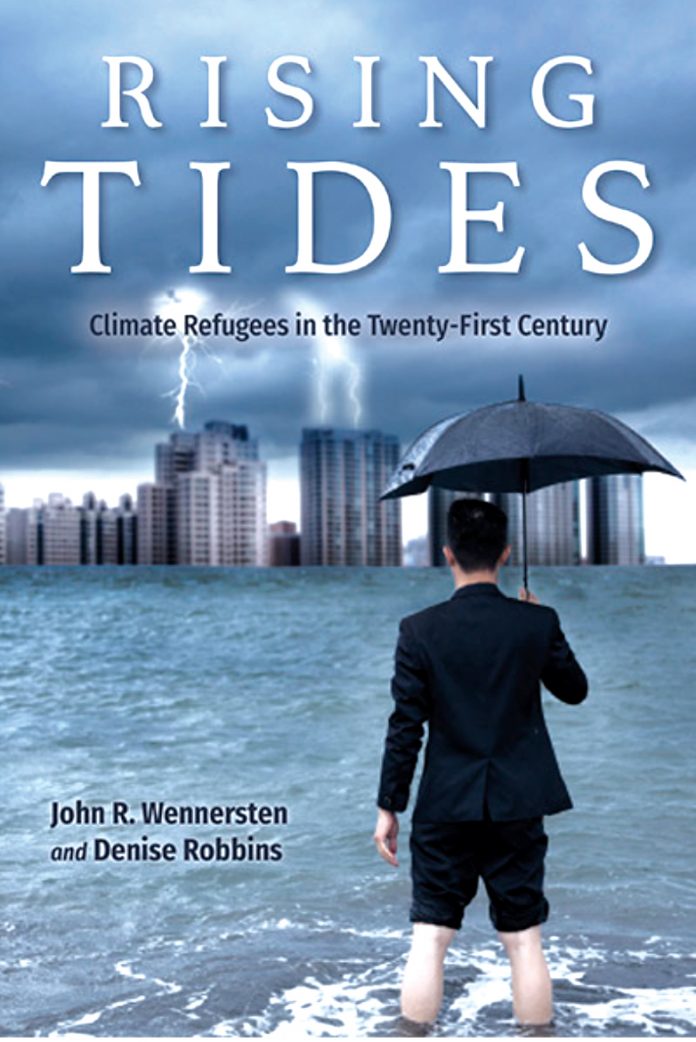 In 2017, John R. Wennersten and Denise Robbins issued a dire warning in their book, “Rising Tides: Climate Refugees in the Twenty-First Century.” They predicted that the effects of climate change, such as drought and rising sea levels, would result in a veritable “human tsunami” of people forced to flee their homes and resettle in more livable areas.

Since then, we have seen natural disasters of major proportions, with tornadoes, wildfires, hurricanes, and earthquakes causing unprecedented devastation. We thought it was time to revisit the topic—and who better to turn to than our local expert, who has written nine books on environmental issues, including “Anacostia: The Death and Birth of An American River” and “Global Thirst: Water and Society in the 21st Century.”

Q: So, Jack, how are we doing at combatting climate change?

A: We certainly are not doing as well as we might have anticipated. There seems to be a serious disconnect between what we as average citizens see happening to our environment and what our political and business leaders in this country are doing to rectify our environmental problems. At this writing, the new governor of Virginia has chosen the biggest coal lobbyist in his state to be Secretary of the Environment for Virginia. When it comes to fossil fuels, the foxes always seem to be guarding the hen house. Heavy rains and heat and firestorms have become more of a problem. Asthma has become a much more difficult problem, with dust and other contaminants in the air. Plus, the thawing of the permafrost in Alaska and other places in the far North threatens to release large quantities of potentially dangerous methane into the earth’s atmosphere. Yes, we have some key environmental leaders in place with good ideas, such as John Kerry. But the pace of environmental degradation is taking place faster than the best intentions can correct. It’s not the best time to build a beach house, live in low-lying riverine areas, or out West in dry areas.

Q: In “Rising Tides,” you estimated that 25 to 50 million people would become climate refugees by 2020. Has that sad prediction come true?

A: According to the United Nations Human Rights Commission, there were in 2021 some 84 million displaced persons world-wide. Many of these people like Syrians are subject to both environmental and political pressures. Meanwhile the United States in 2020 admitted 11,000 refugees and granted asylum to approximately 31,000. Other countries like Denmark and Germany have been much more open to the problem of refugees. According to the latest statistics we probably will have 150-200 million climate refugees on the move on our planet by 2050. We in this country have hardly begin to assess the impact of this coming human tsunami. Environmental refugees don’t have the legal human rights standing before the United Nations that persecuted political refugees have and do not receive the help and assistance they need.

Q: Are there any specific examples you can share about areas that have become unlivable since you wrote the book?

A: The most obvious cases are the Solomons and other Pacific atolls that are simply washing away from high tides. Also, rising temperatures make human habitation difficult. Once it reaches a mean temperature of 30 degrees Centigrade or 86 degrees Fahrenheit, humans begin to have lifestyle difficulties. Major parts of Africa and India come to mind as well as the northern tier of Latin America. In my thinking, the two most unlivable modern mega cities in the world today are Lagos, Nigeria, and Dhaka, Bangladesh. Others like Tripoli in Libya and New Delhi, India, suffer from excruciating environmental problems as well. Large areas of the planet will become unlivable simply because of limited access to water or severely polluted drinking water.

Q: Have any environmental initiatives, such as reforestation and recycling, helped to alleviate the situation?

A: Reforestation has and can continue to work wonders, especially the planting of trees in areas lacking green infrastructure. Recycling has its benefits as well, but the millions of tons of plastic that float in our oceans and wash up on our shores is a plague that haunts us. Those of us who buy water in plastic bottles are accessories to this plague. We need to see a regeneration of public drinking water fountains in our parks and public places. We don’t need $2 bottled water. The one initiative that people are not talking about is nuclear power. As our ever-hungry electric grid continues to grow, how will we produce electricity?  Solar and wind will not be enough to replace coal and natural gas. So, we shall look to nuclear power to make our electricity. And nuclear power brings forth plenty of its own environmental problems.

Q: Have recent global political actions such as the Glasgow Conference helped to slow global warming or deal with the resulting displacement?

A: I think that these conferences have a salutary benefit in raising popular consciousness as to the environmental perils that we need to confront. But the pledges and benchmarks made at these conferences can get lost in the global media noise of politics and economic development. We still believe that there is a technological fix out there to help us solve all of our climate change problems. But it is not so much a technological fix that we need. We need a profound change in public attitudes and lifestyles. Until recently we thought of climate disasters as happening to people somewhere else in the world. Now those disasters are happening in this country. The DC Metro area recently has had its share of tidal surges that have flooded the Georgetown waterfront. In the future these surges will be more than a minor inconvenience to local residents.

Q: Do you see any hope on the horizon?

A: Funny thing about the word “hope.” Hope is a sentiment, not a strategy. If we pursue a simple strategy of world-wide reforestation and if western developed countries are willing to take a ten percent reduction in their standard of living to save the environment and commit to a really comprehensive program of water conservation and safe drinking water, we have a good chance going forward, especially as we educate our children to be good environmental stewards. Then we have a shot at having something potentially sustainable.

Jack Wennersten is a professor emeritus in environmental history at the University of Maryland, Eastern Shore and a Senior Fellow at the Smithsonian Institute.

The Many Voiced National