Gloria Jean Campbell is 89 years old and has lived in Washington, DC her whole life.  Among the things about life here that she remembers are H Street NE in the 1940s and 50s as our “big town” where everyone went to shop. There were intriguing giant fish tanks in the G.C. Murphy five and dime store, the latest records for sale at SoulShack and elegant clothing to be had at stores called Morton’s and Cavalier’s.

She recalls going to Cardozo High School and learning to type so fast and use an adding machine so well that after she graduated in 1950 she had no trouble finding jobs with various federal government agencies. She remembers that she never learned to drive but she walked “everywhere” including to the Howard Theater to see comedian Moms Mabley and to hear Pearl Bailey and Ella Fitzgerald sing.

And she remembers houses—in Southwest where she was born at 122 M Street SW which now is the development called Greenleaf Gardens; at 15th and Constitution  Avenue NE where she and her parents and six brothers and sisters lived at 1536 B Street NE next door to her grandparents and where she met the young man across the street she was to marry; and, of course, the house at 1349 South Carolina Ave. SE where she and her late husband Francis, raised seven children.

Today, sitting in the living room of his mother’s current home on North Carolina Avenue SE, her oldest child, Francis M. Campbell, says, “We’ve learned – in our family – that you always want to own a home.”

That may sound like conventional wisdom, but for African Americans in Washington, DC and elsewhere home ownership has often been an elusive goal. Post World War II redlining made mortgages out of reach for most Black people; restrictive homeowners’ covenants kept them out of many neighborhoods; and, especially in Southwest D.C., 1960s and 70s urban redevelopment displaced large numbers of residents and destroyed great swaths of affordable housing stock.

Francis himself remembers buying his first home in 1977.  He knew that the person selling a house at 1805 Burke St. SE had a daughter who was about to be married. An accomplished musician, Francis offered to play music for the wedding for free in exchange for a reduction in the price of the house – and it worked. He became a homeowner.

Gloria Campbell’s husband’s grandfather, Prince Robinson, worked for many years in the U.S. Senate barbershop where he became well known as the “Singing Barber” who, while he cut their hair, entertained and soothed his clients with spirituals and popular songs. When he died in 1927 a Senate fund paid off the amount remaining on the mortgage on his house at 15th and B Streets NE. A few years later the street’s name was changed to Constitution Avenue (while B Street SE became Independence Ave.)

The house passed on to his daughter, Blanche Campbell, Mrs. Campbell’s mother-in-law.  Her father Frank had steady employment at Arlington Cemetery where he was, among other things, a grave digger. Gloria lived with her parents and six sisters and brothers across the street.

Gloria attended Lovejoy Elementary School on 12th St. NE (in a building that is now Lovejoy Lofts). The junior high school closest to her home, Eliot, did not admit Blacks so Gloria went to Brown Junior High on 26th Street NE, a school so overcrowded that students attended in split shifts and from which would come one of the early legal cases challenging segregation in schools. From there she went not to nearby Eastern High School – again, a school at that time reserved for white students – but to Cardozo, then located at 9th and Rhode Island Ave. NE from which she graduated in 1950.  That same year she married Francis J. Campbell.

Gloria worked in various government agencies located in or near what is now L’Enfant Plaza.  Her husband would often drive her to work, then return home and literally run to his own job as a supervisor at the main post office near Union Station.  When they bought a home at 1349 South Carolina Avenue SE, Francis’s mother, now widowed, moved in with them.  And there they raised their own family of seven children – four sons and three daughters.

Oldest son Francis M. Campbell, who served for many years as an ANC 6B commissioner, remembers lively family dinners with ten people around the table, a Catholic blessing said by his father or grandmother, and good food.  “Meat loaf, fried chicken, fresh greens from our garden…and then cakes.”  His grandmother was famous for her yellow cake with chocolate frosting and for the cinnamon buns that would fill the house with delicious smells. In a crock pot she kept under the stairs she made wines — green grape or dandelion. There was a regular rotation for the children to wash and put away the dishes and do other household chores. She also made their clothing.

Family activities often centered around oldest daughter, Robin, who early on distinguished herself as a gifted middle distance runner.  She remembers running through the halls of her mother’s office in the Housing and Urban Development building at L’Enfant Plaza and competing in events at Madison Square Garden and the Richmond Coliseum.  In 1973, when she qualified for the In Door National team, her picture was on the front page of the Washington Post. But she was only 13, too young to be selected.

Early on she had caught the attention of Brooks Johnson, a teacher and athletic director as well as track & field coach from St. Albans School in Northwest DC.  He encouraged her, invited her to work out with the St. Albans team and, in 1975, when he was recruited to coach at the University of Florida, invited her to come live with him there so she could continue training with him. Her mom insisted that her sister go too so, when they were 15 and 13, Gloria’s two daughters, Robin and Donna, went to live in Gainesville (where the round the corner neighbor, Dr. Robert Cade, was developing Gatorade and became a friend, asking the sisters to comment on different flavors. They liked lime.)

Robin went on to qualify for two Olympic teams. The United States boycotted the 1980 Olympics in Moscow but in 1984 the whole Campbell family went to see her compete in Los Angeles where Brooks Johnson coached the U.S. women’s track team and Robin placed fifth in the semi-finals. Robin remembers that, although her family was way up in the top of the viewing stands, above all the noise she could pick out her mother’s voice, yelling her name and urging her on. 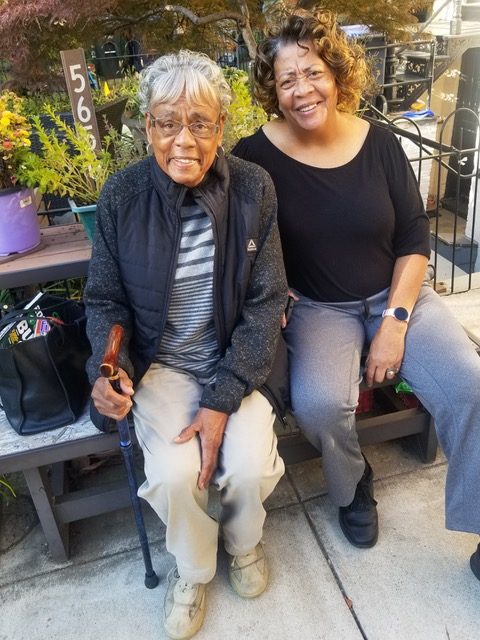 When Mrs. Campbell retired in 2003, she had worked for the federal government for 53 years.  She had raised seven children, six of whom went to college and all of whom now own their own homes. She has four living siblings all of whom own houses. There are thirteen grandchildren and four great grandchildren.

She takes pleasure in seeing family, in keeping big scrapbooks recording their births and graduations and weddings, in working in her yard, tending to the dahlias and shooing away the squirrels and birds from her fig trees, listening to the news or watching The Price is Right. And most of all, she says, she likes “keeping my house up.”

In her long life there have been many houses – each one of them an anchor of economic progress, a center of family activity, a place of hard work, of deep affection, of respect, and of fun – in short, each one has truly been a home.