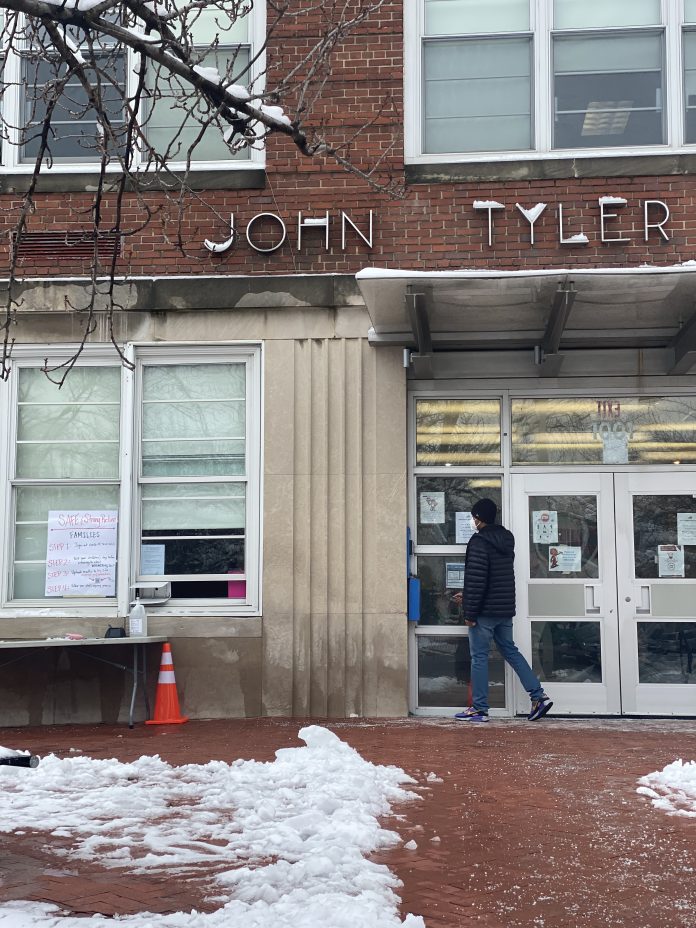 There were few lines Wednesday morning, the second day of rapid test distribution prior to the return to in-person learning at DC Public Schools (DCPS) and public charter schools tomorrow, Jan. 6. At most schools, families walked in and out with the iHealth rapid antigen tests in minutes.

At around 7:15 a.m. Wednesday, DCPS announced a two-hour delay to the start of test pick-up at schools due to weather. A line formed outside Tyler Elementary at 8:30 a.m. anyway, on site staff said. “There was some confusion,” she said. But given they were ready, staff decided to start distribution.

The start of school was delayed by one day due to the snowstorm. Now, all DC public and public charter students are required to submit a negative test result by 5 p.m. Jan 5 –or bring proof of a negative result from a test taken in the previous 24 hours –in order to return to schools the morning of Jan. 6.

This will be the largest data collection DC has ever done, Mayor Muriel Bowser said in announcing the program Dec. 29. More than 90,000 students attend DC public and public charter schools. While rapid tests will be available at schools on the first day of classes, submission of test results on Wednesday will help reduce first-day chaos.

In an email sent late Wednesday evening, DCPS said more than 20,000 DCPS families had submitted their student’s COVID-19 test results and encouraged others to do so as soon as possible. That’s about half the DCPS student population –according to the DC Office of the State Superintendent of Education (OSSE) about 44,890 students were enrolled at DCPS at the start of the 2021-22 school year.

While DCPS acknowledged some technical difficulties Tuesday with the Safe Return Portal where families were expected to upload test results, there were few reports of such difficulties circulating Wednesday.

“They [parents] are NOT going to live by the honor system!” tweeted one woman, who self-identified as a DCPS educator. “They are simply going to write a note saying their child is negative! Test or no test!”

This isn’t a gotcha tweet. As a dcps educator I know for a fact that once students abs parents see this.. they are NOT going to live by the honor system! They are simply going to write a note saying their child is negative! Test or no test!

“I’m a little skeptical, I mean about schools reopening with the cases going up right now. I think we should have transitioned into virtual in the meantime,” Eric said as he picked up a test for his second-grader. It will be the first time the family is using a rapid test, and he said he didn’t know how it would go. “It’s brand new; I’m not sure what to say about it,” he said.

At Payne Elementary (1445 C St. SE), another parent said he thought testing every student to return to school is unnecessary. “I very strongly feel kids should be in school,” Matthew said, as he stopped at Payne Elementary (1445 C St. SE) to pick up tests for his two children, grade 1 and 2 students at nearby Watkins Elementary. He said he did not understand why DC had opted for test to return when test to stay has been recommended by the CDC.

Matthew said he thinks one of the reasons people so many people left the District over the past year was because of “unruly and overreaching policies of DC Government and DCPS in order to protect adults who have the ability to make a choice on their own.”

“There seems to be this overarching theme of ‘we must protect everyone’ and that is unrealistic,” Matthew said. “Kids have suffered too long. Good communities don’t use kids as a ploy to protect the community.”

‘As Good as We Can Feel at This Point’

Others were feeling good about the District’s plans for a return to school and confident in DCPS. “This is the first time that I actually do feel confident, like there’s a plan in place for our kids,” Dewey said as he stopped at Tyler Elementary to pick up a test for his son, a special-needs student in first grade at the school.

Dewey, who lives in the Anacostia neighborhood, compares the January 2022 return to September 2021, when parents sent children back to school with no testing and far less certainty. His son contracted COVID-19 within the first week and a half of the school year, he said.

On the eve of a return to school, Dewey said he’s as confident in returning as he can be in the context. “It seems like COVID is something we’re going to have to live with, so at this point for them to at least have an idea of how we’re going to bring these kids back -and somewhat safely- I think that’s important.”

Rita agrees. She said DCPS is doing a good job of making parents feel as comfortable as they can. It was really easy to pick up a test for her pre-k4 student, she said. “So far, it’s been managed so well by DCPS since the fall that I kind of have faith that they’re going to be okay with this return –and I think we do need to get the kids back in school.”

Here is what to do if your child tests negative or positive: pic.twitter.com/YtIngDZK4v

Both Mayor Muriel Bowser and DCPS Chancellor Lewis Ferebee emphasized at a Dec. 29 press conference that the District was prioritizing in-person learning. Decisions to transition a class, grade level or entire school to virtual learning will be made on a school-by-school basis, Ferebee said. Factors considered are if operations are possible and if education can be consistent, based on staff availability and how many students and staff are in quarantine.

District officials will have to look at data submitted the day before school to make decisions for what the first day of school will look like at many schools, Bowser added at the conference.

Schools are expected to send updates on what the first day instructional schedule will look like during the evening of Jan. 5 via email, text and telephone. If your school needs to shift to situational virtual learning, we will notify you as quickly as possible. Additional information about positivity rates within the community and adjustments to school operating statuses are also to be shared at the District level.