Has the hard work of the DC Council’s Redistricting Subcommittee over the last two months been just for show? There is no doubt that At-Large Councilmembers Elissa Silverman, Anita Bonds, and Christina Henderson should be commended for their efforts to hear constituent concerns about Ward boundaries. However, the redistricting map they made public barely a day before approving it tells a different story. Simply said, it begs the question – were they actually listening?

The answer? A resounding NO, as their final map fails to reflect many of the concerns voiced by DC residents. Councilmember Bonds acknowledged recently that the redistricting process is “inherently political.” Given the many Councilmember preferences and benefits that can be read between the lines of the map, it is also inherently clear that truer words have never been spoken.

Before its first vote on redistricting, on Dec. 7, the DC Council must revisit the map and draw boundaries that best serve constituents, not political interests.

Perhaps worse than ignoring the input of hundreds of constituents is the fact that the map violates many of the critical principles Subcommittee members claimed to prioritize throughout the process. These include:

The importance of keeping communities of interest together. In my own community, this map splits Capitol Hill, and Ward 6 trades its stovepipe for a panhandle. Capitol Hill has been termed “a city within a city,” and residents who have lived on the Hill for generations do not see a dividing line at any point between the Capitol and the Anacostia River. This map rejects the pleas from so many of my neighbors to reflect this fact in the final redistricting map. During Ward 6 testimony, it was also clear that the near Southwest community wanted to remain intact – which fortunately it has with this map. But Capitol Hill is also a unique community that should be served within one Ward.

The need for compact and contiguous Wards with boundaries that are geographically sensible. Keeping communities of interest together should go hand-in-hand with the need for compact and contiguous Wards. Why must Ward 6 spread into all four quadrants of Washington, DC?  Having Council representation that must serve so many diverse interests actually dilutes the voice of communities and residents. Further, if the Subcommittee’s goal was to draw compact lines, why would it allow a stovepipe to be traded for a panhandle?

Equal representation that is racially equitable and respects the need for continuity. Ultimately, equity in redistricting requires that our most marginalized communities have a greater impact on city politics – and this map fails to achieve that goal. The redrawn boundaries add less than 6,000 residents to Ward 7 and makes it the least diverse in DC. It also does little to nothing to increase the representative power east of the river — and their communities’ many and varying concerns. Drawing its boundaries so far west of the river and splitting Capitol Hill community further dilutes the possibility for Capitol Hill residents to have effective representation. The bottom line: splitting Capitol Hill dilutes representation on both sides of the Anacostia River.

Boundaries that divide Wards by whole census tracts. As seen in the map (Figure 1), the boundaries carved into the Capitol Hill neighborhood had to be drawn at the block level, which is significantly smaller than the census tract level. As drawn, Ward 7 west of the river would conveniently have enough residents to form a small Advisory Neighborhood Commission: five single member districts (SMD) comprising approximately 2,000 residents per SMD. Meanwhile, 4,000 Kingman Park residents are moved out of Ward 7, back to the already larger Ward 6. 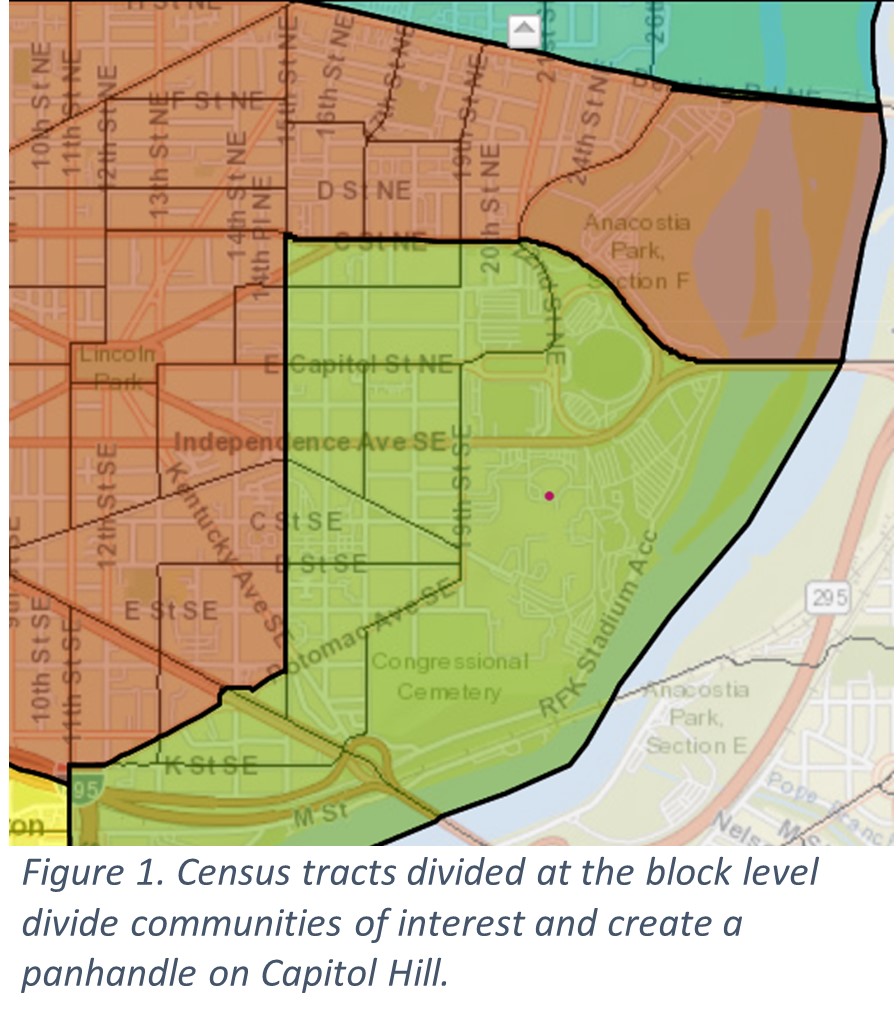 Simply said, the redistricting map approved by the Subcommittee fails to achieve their original stated principles. If the Council’s goals are to focus on protecting communities of interest, drawing geographically-sensible boundaries, and improving racial equity, why not redistribute to Wards 7 and 8 the areas of Ward 6 that grew the most rapidly (and vertically – the Navy Yard and the Wharf/Southwest, respectively)?

This would leave the unique communities of both Capitol Hill and near Southwest intact – and protect the historic Capitol Hill community from being split due to vertical population growth. Indeed, by drawing boundaries that place Navy Yard in Ward 7 and the Wharf/near Southwest in Ward 8, and also return Reservation 13 to Ward 6, the Council can achieve so many of its stated objectives. Making these changes would also give the Council an opportunity to act on redistricting in a way that actually listens to constituents, instead of making backroom deals that only benefit politicians.

The DC Council’s push to ensure a fair redistricting process cannot be just for show. I urge my friends and neighbors on Capitol Hill to reach out to the Council to share their views – and soon, as the Council’s first vote on redistricting will take place on Tuesday, December 7. Please urge them to keep our very important, historical Capitol Hill community intact: email or call DC Council Chairman Phil Mendelson (pmendelson@dccouncil.us or 202-724-8032) – who’s also our neighbor on the Hill – to let him know that it’s not okay for the Council to play politics with redistricting in ways that diminish our collective voice.

Brynn Barnett is a longtime Capitol Hill resident and past chair of ANC 6B’s Hill East Task Force. Reach her at dcbrynn@gmail.com