Angela Costantini is sitting next to her brand-new hearth, a fire crackling within. The interior of the oven in the brand-new La Casina Pinseria has been newly refurbished with Italian brick, and the temperature must be gradually increased to 500 degrees as the brick dries.

It’s a warm atmosphere, and it feels like home. And it should: in July 2021, Angela and her husband Fabrizio Costantini moved their entire family from Rome, Italy to Washington DC to fulfill a life-long dream: to open a Roman Pinseria and live in the heart of America.

Now, more than a year after beginning talks towards the lease, they are on the cusp of realizing that goal.

“We are happy, because we have our dream,” said Angela, her Italian inflection coming out with her excitement. “For us, it is incredible. We don’t even realize it is true.”

They started the project way back in 2016, but Angela laughs at those who commiserate with her about the slow pace of District. “Every time I say, ‘we need a permit, and it could take a long time’ [people] say, ‘Welcome to DC.” And I say, ‘You don’t know Rome.”

The District process was quite efficient, Angela said, especially given that it was affected by COVID. In Italy, she said, businesses can open without a license. The bureaucracy is complex and applications can take years to process. However, that doesn’t stop the city from issuing fines for non-compliance, she adds wryly.

Fabrizio and Angela know the Roman restaurant business well. They have spent much of their career so far expanding the family restaurant business just outside the EUR District in Rome. Called La Casina 1978 (Via Duccio di Buoninsegna 2-22, Roma), the Costantinis expanded the Roman location to include not only pinseria but also cocktails, a bistro and a pastry shop.

Now, they’ve brought it to Capitol Hill. But don’t call it a pizzeria!

Fabrizio Costantini describes the restaurant as a Pinseria Romana. Roman pinsa is a modern take on an ancient Roman dough. It has a mixture of flours, with low gluten content and high moisture —but no yeast, Fabrizio Costantini explains. “It is left to rest for about 36 to 48 hours in the refrigerator. It will ripen naturally, taking on a crunchy appearance when cooked but soft and light inside.”

The taste is totally different even from Neapolitan pizza, Angela said. “You’ll taste it, and when you tell me, “It’s very good –it’s so light” –for me, [that]’s worth all the work.”

This three-day process results in a “cloud” of pizza —a delicious soft crust that still has a delightful, crispy exterior. That means the chef at the La Casina pinsa oven, rebuilt with Roman brick on the interior, must be extra vigilant, Angela said. “That is a very important part of the pizza, because if you don’t know how to cook pinsa, you can waste so much time,” she gravely notes. “Because if you burn the pizza, you burn three days of work.”

So thus far, Fabrizio has the critical responsibilities at the oven. They’d like to find someone else to take on that important role as well, but as for many restaurateurs, it’s been hard for the Costantinis to find staff. They’ve hired four people, but are looking for three more: a dinner server, prep cook, plus an additional pinsa chef to work the oven. 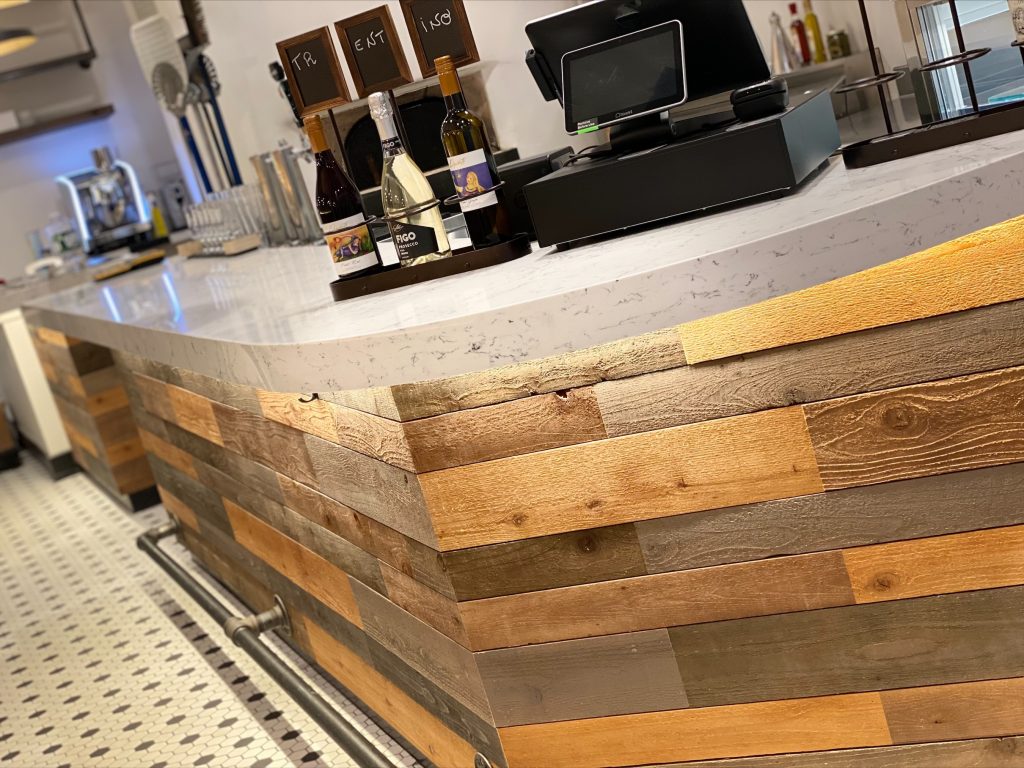 But they’re ready to open Monday. La Casina will seat 28 guests indoors with 20 on the patio. Besides pizza, the pinseria will serve salads, fried vegetables, mozzarella-filled rice balls, fried stuffed olives, and other Roman dishes. Complementing these classics is draft beer, wine and other beverages. Half-sized pinsa will be pre-prepared for selection at lunch; after three minutes in the oven, customers can walk away with a freshly cooked, truly Roman repast.

For lunch, you can order to-go or to stay via phone, direct at the counter or from wait staff. You can take one of six seats at the bar to watch the Nationals or the Capitals as you quaff a beer alongside your meal. Or order dinner from wait staff seated at table, where Italian style is evident in the industrial metal chairs and marble table tops.

Angela and Fabrizio say they are excited their dream is finally being realized. They know they will spend most every day of the next year at their new pinsa home on the Hill, “with the heat of the pinsa,” as Angela puts it. “But it’s worth it,” she said. “This is the dream, and it is important to us.”

Moving in time with Mitski