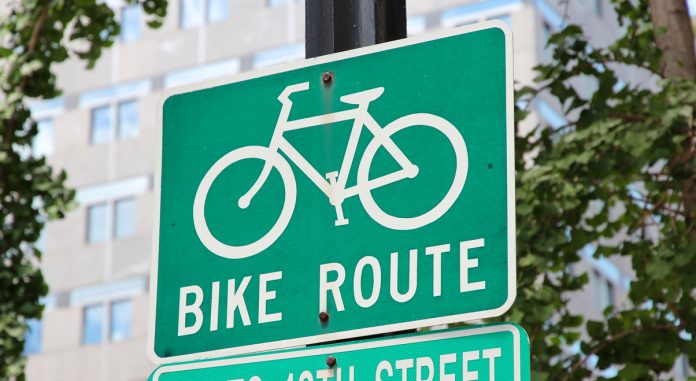 In the wake of yet another dire warning on climate change from global scientists, it is jarring to be caught up in debates about the merits of a bike lane project at the block-by-block level. And in a year in which traffic fatalities are on track to exceed last year’s deadly tally, which surpassed that of the year before, I didn’t have “neighbor screams ‘No bike lanes on my block!’ while my kids and I hand out meeting notices” on my ANC bingo card.

Yet, here we are.

The city finally broke ground last month on the C Street Project, which aims to transform Capitol Hill’s eastern gateway from near-highway conditions to a safer, slower street — there have been several deadly or near-deadly crashes along the stretch in the past year alone. The $16M effort will remove a vehicle travel lane in each direction, add raised crosswalks and greenspace, and install an all ages and abilities protected bike path to connect the Anacostia River Trail to Lincoln Park. Or nearly so.

At some point in the decade between initial concept and final designs, the 1300 block of North Carolina Avenue NE was dropped from DDOT’s plans. No one at DDOT has been able to explain to me how this happened.

What is clear is that this block was highlighted in the 2014 MoveDC plan as part of the city’s planned bicycle network, and that elimination from the final C Street designs, whether intentional or otherwise, was not for lack of need. Neighbors have long complained of speeding on this double long block, leading to crashes into parked cars and near misses for people walking, biking, or unloading groceries. Children and grown-ups regularly ride and scoot on the sidewalk rather than the street, eliciting complaints from people walking. With 80% of vehicles headed westbound, the lower volume eastbound lane allows drivers to speed, especially while making less-than-90-degree turns from 13th Street. In January our Commission unanimously endorsed resident requests for speed humps and raised crosswalks for this block.

Around the same time, DDOT asked to speak at our Transportation and Public Space Committee to discuss traffic calming and bike connectivity for this segment. At two public meetings, DDOT presented several initial concepts, seeking input on a preferred design. One set of designs (A1 and A2) would remove about 25 parking spaces on the south side of the block. The other four proposals (B through E) would retain nearly all parking but convert this block to one-way westbound, rerouting eastbound drivers to East Capitol or Constitution. All proposals aim to slow drivers by narrowing vehicle travel lanes and adding a mid-block raised crosswalk. All designs would also add protected bicycle facilities to allow hesitant riders a seamless connection between Lincoln Park and the Anacostia River Trail.

In working with our community to inform the plans, I’ve heard three primary concerns. The first is the urgent need to slow drivers and improve pedestrian safety. A second set of concerns is around accessible parking, particularly for many senior residents and caregivers of young children. Neighbors are also worried about the consequences of a one-way conversion, including increased travel time for residents who drive and the impact of diverted traffic on surrounding blocks, including near Maury Elementary.

Based on the information shared to date, I believe the one-way options (designs B through E) best respond to these concerns. First, narrowing the travel lane has been shown to reduce speeding; a 10 foot lane bounded by physical barriers, not just a painted bike lane, will slow drivers even more. Second, the one-way designs retain nearly all parking, including handicapped parking, removing roughly three spots for the mid-block raised crosswalk. An independent analysis of the effect of the one-way options indicated that an additional 600 vehicles would be rerouted either north on 13th to Constitution or east on East Capitol Street each day, adding two to three minutes travel time for drivers. Using pre-pandemic traffic volumes, this represents a 5% increase in daily vehicle trips along each route. I’ve asked for more information on these and other details, including the basis for DDOT engineers’ rejection of alternate designs such as sharrows and Advisory Bike Lanes as not being safe enough given the conditions of this block.

Once DDOT finalizes a design and opens the official public comment period, our Commission will weigh in with our recommendations. Some residents are petitioning our Commission to reject DDOT’s plans. But doing so could risk losing our chance to inform DDOT’s designs. In a recent similar project ANC6D voted against the options given to them, resulting in DDOT advancing the work over the ANC’s objections and a loss of 27+ parking spaces. I’ve also heard from many residents who support of the project, in addition to more than 300 petitioners seeking protected bike facilities. Direct input from residents will help to ensure the best design possible. Please review the proposals and email me (6A04@anc.dc.gov) and project manager Will Handsfield (will.handsfield@dc.gov) your thoughts and suggestions.

I am grateful to the neighbors who have emailed, chatted with me on the sidewalk, and asked questions at our meetings. Many have indicated their reluctance to speak publicly about their support, lamenting how toxic the dialogue has become. We must do better. As a Commissioner I am charged with advising DC agencies on the needs of my community while ensuring my recommendations consider the impact on the District as a whole, even if it means making individual neighbors unhappy. Our streets must be designed to be safely used by everyone, no matter how they move through our city. And while the voices of residents who live on this particular block are important, our public spaces belong to and should benefit all of us.

One block might not seem to make a difference in what is truly a global fight for our lives. But every block matters in our efforts to reduce car dependency and increase short non-auto trips. If just one part of the bike route isn’t safe we know hesitant riders won’t use it, or will ride on the sidewalk, increasing risks to pedestrians, especially seniors. And as AARP has advocated, providing users with their own designated space makes our streets safer for everyone. It is time to stop fighting safer streets. This is a once-in-a-decade opportunity to implement our city’s vision for equity, accessibility and climate action and redesign this block to be safer for everyone who lives, walks, drives, rolls and rides on it.

Amber Gove, PhD is a volunteer Advisory Neighborhood Commissioner for 6A04 and Chair of ANC6A. She lives near Lincoln Park, on a block that will be affected by this project, with her husband and two school-aged daughters. Learn more about her here and follow the work of ANC6A at www.anc6a.org. The viewpoints expressed in this article are her own in her capacity as a Commissioner representing her Single Member District.

In Celebration of Gottlieb Simon