A flea market will return to the C Street SE Plaza this weekend.

It will be the first time a market will be held on a Saturday on the site in nearly a year. Diverse Markets Management (DMM) have signed a lease to reopen the markets from 9 a.m. to 4 p.m. Saturdays, starting Sept. 4.

DMM will bring up to 45 additional vendors to C Street. The company already manages the Sunday market on the plaza as well as on the 300 block of Seventh Street SE.

The C Street Plaza is privately owned and maintained by Stanton Development and EastBanc as part of the Hine Development. The Saturday C Street SE vending operation was formerly managed by Carol Wright of Washington Arts, Antiques, Crafts & Collectible Associates (WAACA). In fall 2017, WAACA and DMM signed two separate three-year leases to operate there. The WAACA contract was not renewed. 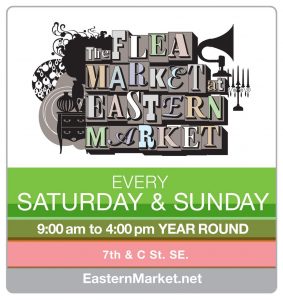 “We are excited to have Diverse Markets take over for the Saturday market,” said EastBanc Senior Property Manager Nicole James. When the contract with WAACA ended in October 2020, EastBanc explored other types of open air markets for the space. “Once it was clear that wasn’t going to pan out, Diverse Markets was the perfect option,” said James.

The new DMM contract runs for the next six months. The market manager has the right of first refusal when the contract comes up for renewal. “With this additional market activity complementing the existing Saturday arts market and farmers market at Eastern Market and on the 300 block of 7th Street, the Flea Market will fill in a vacant area bordered by active restaurants, retail, and residential apartments and condos,” said DMM President Michael Berman.

While emphasizing antiques, arts, collectibles, crafts, and imports, Berman said the Saturday version of the Flea Market is intended to be a high-quality market featuring a mix of unique products. Vendors will sell handmade items, artwork, imported handcrafts with a fair-rrade focus, vintage and antique furnishings and two specialty foods, Berman said.

Further information about the Flea Market at Eastern Market and vending there can be found at Easternmarket.net. Exhibitors interested in applying to participate may register here.