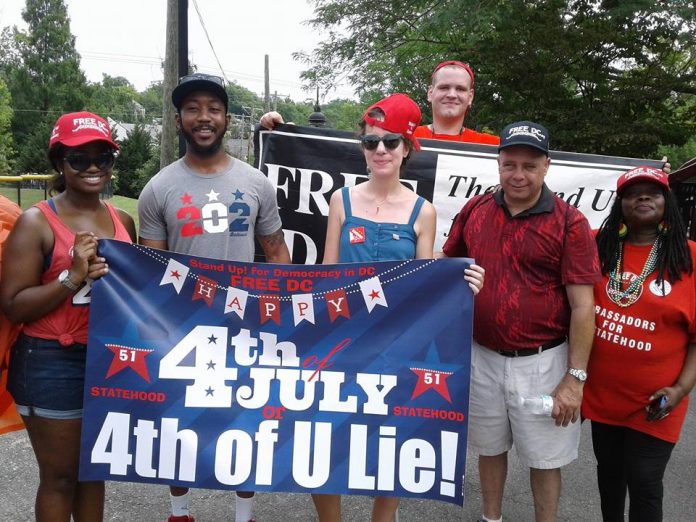 I live in a Black and predominantly Brown community in Washington, DC.  We marched in the Palisades parade on the Fourth of July, a neighborhood which we by jokingly refer to as ‘Upper Caucasia’ due to its being very White and wealthy.

Returning home, my neighborhood resembled World War III. We heard a loud boom. A shower of multi-colored sparklers fell down from the heavens. We dodged to avoid being set on fire!

I could not apologize enough with my sad eyes. The ones who celebrated so vociferously had no knowledge that the Fourth of July was an event not meant for them. That it better suited Palisades, where I had just marched carrying our ‘Free DC, DC  Statehood Now’ and ‘Our 4th of U Lie’ banners. Stand Up! for Democracy in DC, our group, adopted the latter phrase from activist Ayo Handy Kendi.

We annually march to demand our equal rights and citizenship. No matter where we are. My neighbors, however, do not know it is not their celebration.  As Frederick Douglass said on the Fifth of July, “What to the slave is your Fourth of July?”

The times have changed! Our banners are now welcomed with shouts and enthusiasm. Residents of Palisades know full citizenship would be better for all!  I am glad they know it!

For more information about DC Statehood visit Standup for Democracy or email Standup_freedc@yahoo.com.

Beyond The River, Styx