When I awoke the morning after talking to Marcello, my goldendoodle who transitioned last year after 15.5 years together, my heart felt lighter and my breath felt easy and unobstructed. I had been struggling with grief and guilt and regret because I chose to put him to sleep. I had been second-guessing my own gut or inner guide that told me it was time.

The way I was able to find relief was through an animal communicator who facilitated the connection between Marcello and me. She allowed me to hear what Marcello had to say about the end of his physical life which lifted the fog that was clouding the energy around my heart.

Elizabeth Baudhuin, a Hill resident for 33 years, is the woman to whom I am appreciative for releasing me from the heaviness surrounding Marcello’s transition. Without her abilities I would not have realized that Marcello thought what I did was “a gift” and that he was indeed “ready” to physically depart. She is an animal communicator.

She helps people have conversations with their animal companions to understand behavior, support emotional and physical healing and live in greater harmony. She also communicates with those who are about to transition or have transitioned as she did for me with Marcello. She says she ‘listens’ to animals.

How does Animal Communication work?

Animal communication is a way to intuitively tap into the consciousness of the animal in order to exchange information. Each practitioner may have a different way of presenting the information they receive from an animal companion.

Baudhuin works from a photo, or she can go to an owner’s home if necessary.

“I ask if the animal wishes to connect with me. They never have turned me down, but I always ask. I ask we meet in the place where we all speak the same language. I’m acting as a translator between the animal and his/her guardian,” she said. “The messages come to me telepathically. I have the whole range of sensory input. I see, hear, feel feelings both emotional and physical and can taste or smell what they are experiencing.”

I also talked to Gianni, my three-year-old labradoodle, through Baudhuin. It was eye-opening for me, and I saw a change in Gianni’s behavior after our talk. I had no idea he was concerned about my not being able to “hear” him or recognize how much he can assist me. Our talk clarified what my heart was telling me about Gianni – he needs more activity. I have been planning to take him kayaking with me this summer but was waiting until the weather was good. Well, he wants to do it now! It was comforting to learn that Gianni and Marcello still hang out although Gianni said, “It’s different than before. Marcello’s as close as a thought.”

Baudhuin first realized she had psychic abilities at a young age. She said she slept with the light on until she was 13 because she saw “all these helpers in my room.” Her sister gave her a book on psychics that helped her recognize her ability. Baudhuin found out much later that this gift ran in her family. Her great-great grandmother, whom she never met, was a healer and gave readings.

Baudhuin’s psychic mediumship and medical intuitiveness morphed into animal communication about 20 years ago. “I do it all but I feel so passionate about giving animals a voice.”

Baudhuin said Lydia Hiby’s book, Conversations with Animals, solidified for her how important it was to talk to animals. People don’t realize how what they are saying to their animals affects them.

“Lydia worked with race horses that never won a race, then started winning. Lydia was hired to find out what happened. A horse was carried off the track on a stretcher and the trainer told his horse, ‘That’s what happens to horses who don’t win races.’ The horse decided to win every race.”

Baudhuin said she started meditating and became a Reiki practitioner. “All of these things guided me towards listening to animals.”

“When I connect with an animal I hear them speak inside my head (in a voice that is not my own). I am also getting information in other ways,” she explained. “I may see a picture (Marcello showed her a placid lake where he liked to swim. I remembered a place in West Virginia where I often took him), feel sensations in my body that mirror theirs and even smell a food they like or one they don’t.”

Baudhuin said she wants people to know how easy the whole process is. She first requests a photo and one question she should ask the animal. She takes handwritten notes throughout the session. Then lets the human know when to expect her notes.

Baudhuin said all of us can do what she does. “We all have access to same information and abilities. I just practiced more and was drawn to it. It’s the same as me changing the oil in my car. I could learn, but I would prefer to hire a mechanic.”

I would like to develop my ability to communicate with animals. In the meantime, I will continue my daily meditation (in which Gianni joins me), my energy work and be forever thankful to Elizabeth for turning my tremendous loss into a more spiritual journey.

Pattie Cinelli is a health and fitness professional and journalist who has been writing her column for more than 20 years. She focuses on holistic and non-mainstream ways to stay healthy, get well and connect with your true self. Please email her with questions or column suggestions at: [email protected]. 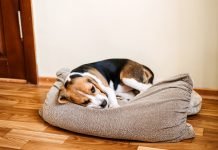