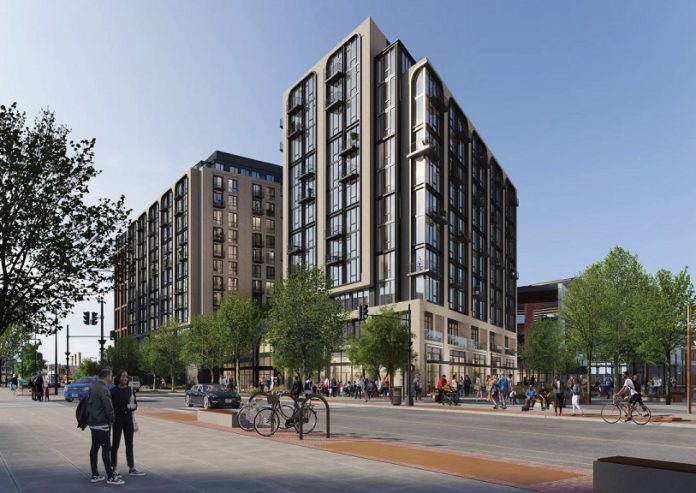 Mayor Muriel Bowser (D) began her address by thanking residents and businesses for their sacrifices during the COVID epidemic. The District has reached US President Joe Biden’s (D) goal of 70 percent vaccinated with at least one dose, she stated.

The FYI 2022 budget, the mayor stated, will provide relief from COVID while setting the stage for further growth, said Bowser, She touted a $400 million investment in the Housing Trust Fund. The plan also includes monies for the repair and stabilization of public housing. The real challenge, she stated, is how to address the homeless encampments that have sprung up during COVID.

The mayor acknowledged residential complaints over parking enforcement, in particular related to the performance of the Dept. of Transportation (DDOT) and the Dept. of Public Works (DPW). The Wharf has exacerbated the scarcity of curbside parking in Southwest, she acknowledged. However, she quickly pivoted away from the issue to point out the progress made on the new Frederick Douglass Bridge despite the pandemic. In particular, she cited the project’s successful minority hiring.

To help reopen the city, the mayor’s new budget funds Business Improvement Districts (BIDs) to create innovative programs in public space. Monies will be put aside to offset the costs of festivals and street events.

How can the city increase the amount of housing required under Inclusionary Zoning (IZ), asked Chair Daniels? The Comprehensive Plan addresses the issue of affordable housing, the mayor replied. Her administration remains focused on the getting the most bang for each dollar of public financing, she added.

Chair Daniels asked whether the administration was considering the current Dept. of Motor Vehicle office (95 M St. SW) as an initial location for a “Build First” approach to the redevelopment of the Greenleaf Public Housing Complex. While there is “energy” around the project, the administration has yet to find a new location for the DMV services at that location.

Chair Daniels then changed the subject to parking enforcement. Cars are parking illegally all over the neighborhoods, he pointed out. When citizens call 311 to ask for enforcement, the complaints are cleared with the citation that no vehicle was found. This issue is being addressed through retraining, answered DPW Director Christine V. Davis, who accompanied the mayor to the meeting.

Chair Daniels then turned the discussion to the issues of traffic signage, pointing out the commission’s area has major problems with missing stop signs. DDOT is reforming the manner in which the agency repairs road signage, stated Interim Director Everett Lott, who also joined the mayor for the meeting. A new online system is coming in July, Lott added.

Asked by Chair Daniels about the periodic violence in Southwest, the mayor pointed to her new Building Blocks initiative, whose funding she had previously touted. This new program employs a public health orientation to flatten crime by identifying shooters and crime in 151 statistically significant city blocks and targeting interagency interventions.

Lastly, Chair Daniels asked the mayor why the city was not enforcing the no parking signs under the highway to the west of the Southwest Fish Market. Lack of two travel lanes due to illegally parked and double parked vehicles routinely backs traffic past the Tidal Basin, Daniels pointed out. The mayor promised to reenergize the Wharf stakeholders group to explore solutions.

Commission took no action on a tavern license application by The Point, a seafood restaurant located at 2100 Second St. SW. No cooperative agreement has been signed with the applicant.

The commission voted to oppose a renewal of the production and service license for The Bardo, 25 Potomac Ave. SE, on the grounds of “peace, order and quiet.” There are continuing issues of noise and sanitation, Chair Daniels stated. There is no community agreement. The commission also opposed the application of BHG Waterfront (715 Wharf St. SW).

The commission voted to support the license of ILILI DC (100 District Square SW) on both a stipulated and permanent basis along with the accompanying community agreement. It also approved the same for The Nightingale Boat, (600 Water Street SW).

Parcel B
PN Hoffman presented its plans for a new retail and residential development on Parcel B, which is the vacant triangle (100 S St. SW) just to the east of Audi Field. The project, jointly owned with DC United, features two connected towers in an S shaped configuration. Retail is planned for the ground floor. One of the buildings would be configured for senior housing while the other will be market rate. Office space is also planned for Volunteers of America, which is moving its headquarters from Alexandria, VA.

The developer needs a small modification to the existing Planned Unit Development. The building design is also subject to review by the Zoning Commission. There will be a hearing late in the fall.

“We don’t need more concrete. We need more green,” stated Kramer criticizing the design of the park. Other commissioners agreed with her sentiments. No vote was taken.

The proposed expansion would not be funded by BID assessments of commercial properties in that area. Rather, the SW BID is asking for $350,000 from the DC Council to fund the project. The monies would be used to hire five individuals who would be dedicated three to five days a week to providing this area with clean and safe services.

While generally supportive of the expansion, several commissions expressed concerns about the details of the use of the new funds. The commission voted to support expansion contingent on the BID providing greater clarity on its plans.

The Jefferson Field is a Dept. of Parks and Recreation (DPR) property, although it is heavily used a recreational space by students of adjacent Jefferson Middle School Academy. It contains a large multi-use soccer field, a baseball diamond, as well as pickle ball and tennis courts. It is lighted. Use of the field is governed by the DPR permit office. It plays frequent host to adult and youth sports leagues.

Local residents often walk their dogs off-leash on Jefferson Field. This is illegal. A recent complaint from the school about the dogs resulted in the property being completely locked up for two weeks.

The city has set aside $1.5 million to renovate Jefferson Field to both improve the drainage and install an artificial turf multi-use field. Bossi asked the commission to support the creation of a dog park on the property as part of that renovation citing the explosion of the local canine population due to COVID and development of the Wharf, as well as the distance to the nearest city dog park which is located at Landsburg Park on Delaware Avenue SW. That dog park, Bossi stated, has both safety and maintenance issues.

Commissioner Hamilton strongly opposed Bossi’s motion arguing that the commission should delay action until it could consult with the PTA and administration at Jefferson Middle School. After much discussion, the commission voted to table the matter until its July meeting.

Other Matters
The commission agree to send a letter to DDOT expressing concerns about the design of the Buzzard Point Bike Trail creating a choke point for pedestrians and cyclists near the Pepco power plant.

The commission voted to send a letter to the DC Zoning Commission regards The Stacks, an Akridge development located just south of Audi Field, which is now undergoing “large tract review.” A park is proposed for the southern end of the project. Commissioners expressed their concerns about maximizing green space for Buzzard Point residents in its design.

The commission voted to send FOIA request to DC Housing Authority regarding the details of Greenleaf Gardens’ redevelopment.

Metropolitan Police Department (MPD) Capt. Jonathan Dorrough, Commander Morgan Kane and Captain Darren Haskis briefed the commission on public safety. There were two major violent incidents last month. Armed gunmen in a car targeted a passenger riding in a Lyft on I-695, Dorrough stated. No one was seriously injured. There was also a homicide involving a group event on O Street SW. MPD is discouraging such gatherings, Kane stated. Property crime, and theft from autos in particular, is up significantly, he said. Homicide on O St. SW. One involved a gathering. There were also two carjackings.

Commissioners agreed to send a letter to DDOT encouraging the agency to maintain its tree boxes. They also agreed to write to Council in support of the DC Dept. of Energy and the Environment’s plan spend $5 million remediating environmental issues in public housing. They authorized Commissioner Hamilton to testify in support.

Commissioners approved the quarterly Treasurer’s Report, the amended meeting agenda and the May meeting minutes unanimously. There was no report from the chair.

ANC 6D meets at 7 p.m. on the second Monday of every month. The next meeting of ANC 6D is for July 12 via WebEx. For more information and links to join ANC meetings, visit anc6d.org.