The fence around the US Capitol is slated to come down starting Friday, July 9.

Removal is expected to begin as early as Friday and take place over the following three days. That’s according to an alert from Sergeant at Arms William J. Walker sent to Members of Congress and Congressional Staff.

“Based on USCP’s assessment of the current threat environment and United States Capitol Police (USCP)’s enhanced coordination with District of Columbia, neighboring state and federal law enforcement partners, the Board supports USCP’s recommendation to remove the termporary fencing around Capitol Square,” reads the alert. 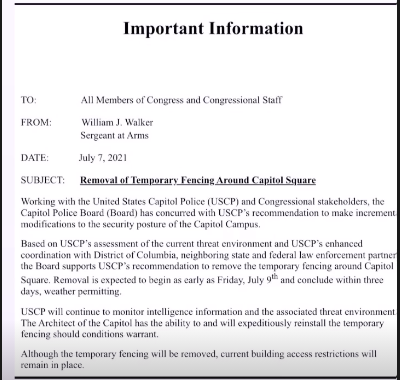 The fencing was installed Jan. 7, the day after a domestic terrorist attack on the US Capitol itself. Five people died and extensive damage was done to the building during the insurrection.

The original plan called for the fencing to remain for 30 days. It has so far been in place for six months.

The notice of removal appears to indicate another shift in the position of USCP. In a release dated Jan. 28, USCP Acting Chief Yogananda Pittman then called for the fence to be permanent.

USCP said they will continue to monitor threats, and the USCP Board has concurred with the USCP recommendation to make incremental modifications to the security posture of the Capitol Campus.

Buidling access restrictions will remain in place, the alert notes. If it is deemed necessary, the fencing could be replaced. “The Architect of the Capitol has the ability to and will expeditiously reinstall the temporary fencing should conditions warrant,” Walker wrote.

Our River: The Anacostia