You have until midnight Friday to comment on changes to a new Circulator Plan that would change the current Circulator route between Eastern Market and L’Enfant Plaza.

The new DC Circulator Transit Development Plan (TDP) modifies the current Circulator route. That route currently begins near Eastern Market Metro, traveling to Navy Yard and the Wharf and finishing at L’Enfant Plaza. The alterations remove the branch of the route that travels from Eastern Market along Pennsylvania Avenue SE and down Eighth Street SE, but adds an extension that would take it up to Mount Vernon Square.

The Plan is in its final draft and comments are due by Friday (today!) at midnight.

The relevant text from the Circulator Plan is reproduced below and can be found along with the larger report and charts of the routes in the adjoining link. 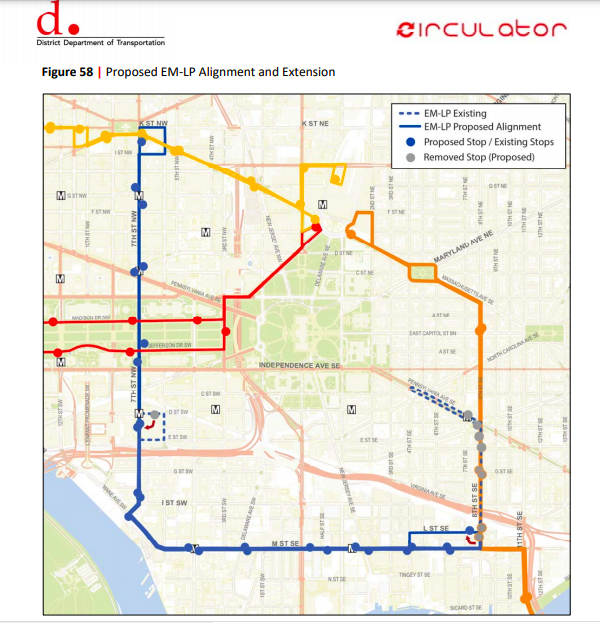 According to the TDP, this route was the lowest‐performing route in almost every performance metric in 2019 and, at 5.4 miles round trip is one of the shortest.

It connects Eastern Market with L’Enfant Plaza via 7th Street NE and M Street SE. The TDP proposes that these two destinations can be accessed by the Blue, Orange, and Silver Metro lines with only three stops in between.

In order to create a more unique route that serves a better purpose within the Circulator system, the project team recommends a route realignment and extension .

The west end of the existing route currently terminates at D Street SW and Seventh Street NW near L’Enfant Plaza Metro station. The proposed west side extension will instead have the bus continue travel north along Seventh Street NW to terminate before Mt Vernon Square and Massachusetts Ave NW.

The route can take three right turns on K Street, Sixth Street, and I Street before returning to the southbound alignment on 7th Street.

This proposed extension would allow for transfer opportunities to two Circulator routes, NM and Georgetown to Union Station (GT-US), as well as more WMATA routes and Metro stations.

Proposed stops are spaced between 0.25 miles and 0.35 miles apart on the west end extension.

Submit your comments BY MIDNIGHT FRIDAY, JUNE 25 at http://www.dccirculator.com/tdp2020/?fbclid=IwAR0eKFQf6oPEBc3IXEKyWeGYIGJQirrplgSljM_DgScxkyWOBw8RQ6FDPLk

Saturday Gathering Will Take Another Look at Ward 7 Redistricting

What Would it Take to Reopen the District?