There’s a new pizzeria coming to Eastern Market —and it’s coming all the way from Italy.

In mid-June, Italian restaurateur Fabrizio Costantini and his family will move from Rome to Capitol Hill to open a Romano-style pizza restaurant. La Casina will be located at 225 Seventh St. SE, the former site of 7th Hill Pizza.

“We are very excited for this authentic Roman pizzeria from Italian operators to go into the 7th Hill space,” said Alejandro Golding, vice president of Stanton Development Corporation.

But although La Casina will also be a pizzeria, it will be completely different.

Costantini describes his pizzeria as a pinseria—a classic pizzeria. Roman pinseria is a truly classic recipe, a modern take on an ancient Roman dough. It has a mixture of flours, with low gluten content and high moisture —but no yeast, Constantini explains.

“It is left to rest for about 36 to 48 hours in the refrigerator. It will ripen naturally, taking on a crunchy appearance when cooked but soft and light inside.”

This results in a “cloud” of pizza —a delicious soft crust that still has a delightful, crispy exterior.

Costantini has spent much of his career so far expanding his family restaurant business just outside the EUR District in Rome. Called La Casina 1978 (Via Duccio di Buoninsegna 2-22, Roma), Costantini expanded the Roman restaurant to include Roman pinseria, cocktails, a bistro and a pastry shop.

But Costantini is not only transplanting traditions from his family business to Capitol Hill. He’s bringing his family to live in the District as well.

In 2009 the Costantini family came to DC for a long vacation, Costantini said. “My family and I literally fell in love with this city,” he recalls. “Over the years we have felt it [grow] more and more familiar.”

Costantini and his family forged friendships that endured even at a distance. Now he and his wife Angela are bringing both their family and family tradition to the Hill. “We want our girls to be able to live their American dream,” Fabrizio said of daughters Iulai, 13 and Amélie (Amy), 9.

Due to open in July, La Casina will seat 33 guests indoors with 20 on the patio. Besides pizza, the pinseria will serve salads, fried vegetables, mozzarella-filled rice balls, fried stuffed olives, and other Roman dishes. Complementing these classics will be draft beer, wine and other beverages.

“Our pinse will be tasty, traditional, but light;” Fabrizio said. “If you want to eat two, lunch is specially designed to make quick but in a street version —smaller but always tasty.”

The restaurateur said that he will be on site to greet his new customers and neighbors. “You will see us at the forefront making dough and cooking the pinse for our customers,” said Fabrizio.

He’s excited to meet his new customers, neighbors and friends. “We found this beautiful place in an equally beautiful neighborhood, and we are working on a great project,” Costantini told the Hill Rag. “We hope to see and meet you in our restaurant soon.”

With additional reporting from Celeste McCall 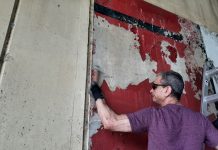 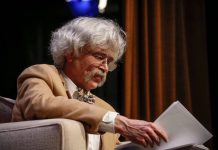 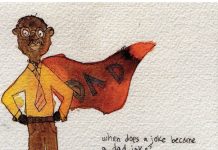 Listen: “I Hate it Here”