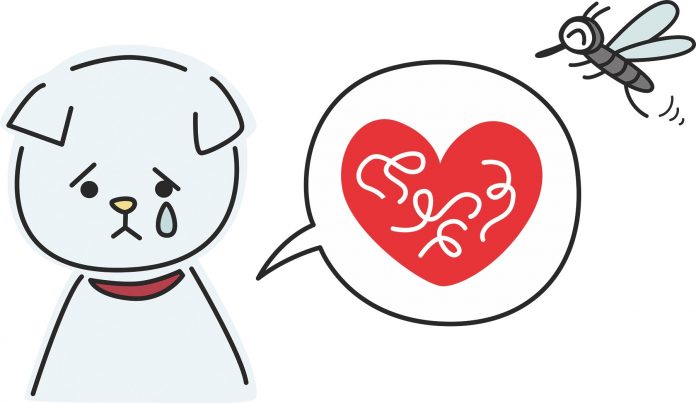 Heartworm disease is endemic to the United States, and most of the dogs in Washington, DC, are taking a preventive to ward off this potentially deadly disease. Whereas heartworm has traditionally been rare within the dogs of DC, this has changed with the advent of the COVID-19 pandemic and dog and cat parents need to be more vigilant than in the past.

The pandemic did not cause more dogs to have heartworm, but more dogs with heartworm are now living in the city. As people increased dog ownership, many dogs came to the District from areas where the parasite is endemic and prevention is scant. Therefore they imported the disease to our city.

It is important to remember how heart worm spread.Dogs look normal and usually show no clinical signs. Inside their bloodstream, larval heartworms called dirofilaria traverse blood vessels awaiting a chance encounter with a mosquito. When a mosquito bites an infected dog, it draws up some blood and possibly dirofilaria. These small baby heartworms live and mature within the mosquito and may be transferred to another dog if the mosquito bites it. Heartworm can only be acquired via a mosquito bite—there is no chance it can be obtained via play, casual contact, or from boarding or daycare situations.

Once inside a dog, the small heartworms slowly migrate through body tissues, eventually settling and maturing within the right side of the heart and the arteries leading from the heart to the lungs. The process from time of entry until full maturity can take about six months. Adult worms will produce more microfilaria, starting the cycle once again.

The six month lag between first acquiring microfilaria and maturity poses an opportunity and a major challenge. Current testing technology only permits screening for adult worms. Many dogs from shelters in endemic areas initially test negative for the disease, but are later found to be harboring mature worms in subsequent testing six months to a year later. This is not an uncommon scenario seen by the veterinarians at District Vet.

The opportunity presented by the delay allows for preventives to kill micorfilaria for their first thirty to forty days within a dog or cat. Once the microfilaria reach above this age, they are usually not susceptible to monthly or infected preventives.

Cats are not capable of harboring reproducing heartworms as they are not the definitive host, but they can be infected and have adult worms within their heart. There is no readily available treatment for adult heartworms in cats. The best treatment is prevention.

Prevention is simple, especially for dogs. A number of oral preventives, given once per month year-round, will greatly reduce the incidence of any immature worms from surviving. HeartGard Plus, Interceptor Plus, and others prevent only heartworm and several intestinal parasites. Simparica Trio, new to the United States pet market in 2020, prevents heartworm, select intestinal parasites, fleas and ticks. It is a once per month combination medication, which has proven to be popular. ProHeart12 is an injection given once per year by your veterinarian, which also prevents heartworm, but has no flea / tick prevention and only treats one intestinal parasite. It has utility, though, as some dog owners utilize flea / tick preventive more selectively through the year, and some dog absolutely refuse to eat the oral preventives. ProHeart12 is also foolproof: it is one and done for the year.

Oral and topical preventives for cats are available and highly recommended especially for cats who are indoor/outdoor or live in a row house or non-high rise building. Remember, mosquitos are common, especially below the third floor of a building.

Heartworm preventives are effective, but not foolproof. Annual testing is recommended in dogs. Preventive failure can result from missing doses, vomiting up a dose or pretending to eat it, or simply a few dirofilaria being resistant to the medication. When caught early, heartworm has a much better chance of successful treatment in dogs.