The  Perfect Candidate
The world is changing—specifically in Saudi Arabia—in the new film “The Perfect Candidate,” the illuminating story of a partially liberated young woman making her way in the world. A modest film, but one full of resonances in the time of the #MeToo movement. (This film is rated “R,” runs 107 minutes, and opened on streaming sites on May 28).

In 2012, the director-writer Haifaa Al Mansour released the well-received “Wadjda,” about a feisty ten-year old Saudi girl who dreams of owning a bike, a desire seen as unladylike. It was the first feature film made by a woman in the Kingdom, but even then the filmmaker, who could not be seen mixing in public with a male crew, had to hide in her production van to direct the shooting! With her new effort, the “creeping liberalism” in Saudi Arabia has filtered into Saudi life.

For example, the new ability of Saudi women to drive appears right up front when we see the film’s protagonist, Maryam (played by the energetic Mila Al Zahrani), driving her own car to her job in a small clinic in a rural town.  She’s a young but already mature ER doctor whom we see early confronting an aging curmudgeon, who steadfastly refuses to be treated—much less touched—by a female.

She receives an invitation to attend a conference in Dubai, but, in attempting to board her flight, she is refused at the gate because she lacks a document from her “guardian” (a responsible male) permitting her to leave the country.  She scurries to acquire such a document, but, after an official mix-up, ends up signing a form making her a candidate to run for her municipal council, which had refused her entreaties to pave a muddy road leading to her clinic. Forced into this new role, Maryam tackles it with determination, eager to fight for her personal cause of the new road. Luckily, she has the fervent support of her two bright younger sisters, Sara (Nora Al Awadh) and Selma (Dhay Al Hilali), the latter of whom has semi-pro video skills.

Maryam’s father, Abdulaziz (played by Khalid Abduraheem) is a widower, a bandleader, and a skilled player of the oud (a lute-like stringed instrument), working against the odds to get prominent outlets for his musical group (his story underscores Al Mansour’s intention to highlight Saudi culture in her work). A decent and laconic man, he is sympathetic to his outspoken daughters, in part because they reflect the activism and spunk of his departed wife, also a musician. Al Mansour works out the rest of the film in shifting, parallel sequences: Maryam’s fluctuating campaign fortunes  (aided by Selma’s video promotions) contrasted with Abdulaziz’s search for a major gig.

Freed from her earlier restrictions of just years before, Al Mansour (now living in California) was thrilled to be working in a much more open environment. (“It was really good to be out of the van,” she said.)  She has more money, a larger crew, and an ability to move about freely within her locations and set-ups. As she herself has noted in an interview:

“The changes are extraordinary for local filmmakers. It was incredibly difficult to make a film in 2011, and people were still very hesitant to embrace any public form of artistic expression. Film especially was seen as taboo, and the idea of opening theaters had become a red line that most of us thought would never be crossed. Of course, now everything has changed, and we have cinemas going up all across the Kingdom. But the larger issue of a lack of infrastructure in the film industry remains. We have a lot of work to do in building up the tools and resources necessary to make quality films… But things are happening fast, and I think we will see a lot more Saudi films in the coming years.”

Still, with “The Perfect Candidate”—as with “Wadjda”—Al Mansour has told a touching and heartening story of a newly-emerging Saudi woman.

American Traitor: The Trial of Axis Sally
Loosely based on a true story of post-WWII, “American Traitor: The Trial of Axis Sally” follows the wartime life of an American woman, Mildred Gillars (Meadow Williams). Dubbed “Axis Sally” for broadcasting Nazi propaganda to American troops during World War II, her story exposes the grim nature of the Third Reich’s propaganda machine, her eventual capture in Berlin at the war’s end, and her subsequent trial for treason—the core of the script—against the United States.

On her radio shows, Axis Sally would typically alternate swing music and propaganda messages aimed at American troops. These messages would advocate surrender, stoke fears that soldiers’ wives and girlfriends were cheating on them and note that the Axis powers knew their locations. US soldiers listened to Gillars’ broadcasts for the entertaining music even as they were skeptical about her attempts at blatant propaganda.

While the film uses sequences showing Gillars’ studio work, it intercuts these with her trial in 1948-49 outside Washington, DC, where she is represented by cynical lawyer James Laughlin (Al Pacino). The film does not show DC locations, however, because it was shot in Puerto Rico.  Her trial, on eight counts of treason, results in one conviction, based on one specific broadcast.

Directed by Michael Polish and co-written by him and two others, this is an intriguing historical footnote which somehow never fully gels on screen.  There is an unfortunate dankness to the cinematography, especially the gray-brown tones of the jail and the courtroom—although this may actually have been the intent of Polish.

Al Pacino, long in the tooth now (at 81), lacks coherence as the defense.  He becomes a senior version of his over-the-top defense attorney in “And Justice for All” (1979).  Meadow Williams personifies—in wardrobe, makeup, and lipstick—a pin-up girl of the period, but her performance is tentative and stiff, and her face looks like a mask. Other players are adequate, such as Swen Temmel as Billy Owen, Laughlin’s naïve assistant (who appears to be falling for Mildred), and Thomas Kretschmann as a swinish Josef Goebbels, but a good many are stilted.

“American Traitor” seems like something of a vanity project for Williams, who also executive-produced.  It might have turned out better if she had been able to distance herself more from it.

Hill resident Mike Canning has written on movies for the Hill Rag since 1993 and is a member of the Washington Area Film Critics Association . He is the author of “Hollywood on the Potomac: How the Movies View Washington, DC.” His reviews and writings on film can be found online at www.mikesflix.com. 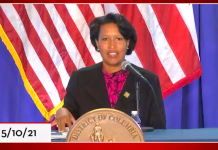