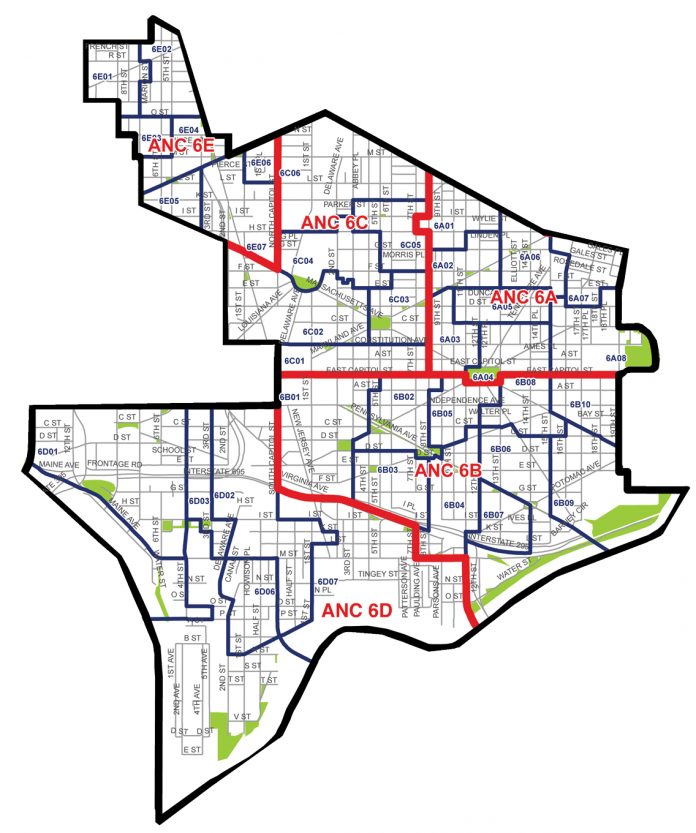 DC Housing Authority (DCHA) Director Tyrone Garrett briefed the commission on his agency’s plans for the redevelopment of the Greenleaf Gardens public housing complex located between Delaware Ave. and Third St. SW. Garrett, who has since resigned, offered a full-throated defense of agency’s administration of the complex.

DCHA, Garrett stated, has created an effective rat abatement program across its properties. Currently, the agency is both repairing and replacing elements of the heating and air-conditioning infrastructure in Greenleaf midrise. While all residential units have had some environmental issues, he admitted, all residents living in such at-risk units have been relocated. This is combined with a stabilization campaign including asbestos/lead abatement, HVAC improvement and repairs, he said.

“Greenleaf was stalled before I got here,” Garrett stated referring to the property’s redevelopment plans. “I want to meet with residents until residents feel meeting fatigue.” In-person meetings with the community will resume as soon as COVID restrictions are lifted, he promised.

Returning to agency reform efforts under his leadership, the agency’s transformation started with “no money,” Garrett stated. Since that time, DCHA has received $90 million from the District to stabilize its properties. Guiding principles for his reforms include: one-for-one replacement, “Build First, “zero permanent displacement” of existing residents, creating mixed-income and multi-generational quality housing to replace existing complexes, improving public safety, better integration of complexes with neighborhoods, the development of human capital along with enhanced community services and amenities. These goals in the case of Greenleaf in particular were reiterated by Executive Vice President Jack Lester of EYA (www.eya.com), DCHA’s development partner.

DCHA’s “Operating Agreement” will set the roles and responsibilities, codifies principles, numbers of units and milestones for delivery and phasing for Greenleaf’s redevelopment will be made available to the commission, Garrett stated. EYA and DCHA will hold workshops and community charrettes, promised Lester and Garrett. A large community meeting is planned for June. The parties will present the entire development plan in September, they stated. Approval of the plan by the DCHA Board of Governors is expected in October with an agreement between EYA and DCHA executed by year’s end.

In many meetings with Greenleaf residents, Lester heard the following concerns: more stakeholder engagement, a more defined timeline and providing better housing options faster. Currently, EYA are working with their third partner The Bozzuto Group (www.bozzuto.com) on using 99 units planned for the site of Westminster Church as part of a build-first solution for Greenleaf’s senior residents. That has not been finalized, Lester stated.

Residents told EYA that they preferred onsite, build-first options, Lester said. To that end, EYA and DCHA are exploring utilizing 48 units at the adjacent James Creek Public Housing complex and options on the Greenleaf site itself.

Development of the parking lots at Capitol Park Twins on the 100 block of G Street SW remains under consideration for affordable housing redevelopment by EYA, but is not part of the Greenleaf deal, Lester said.

Commissioner Kramer questioned Garrett closely. The commission remains frustrated with not being able to see details of the negotiated agreement, she said, asking for details on the build-first strategy for Greenleaf

“I can’t allow residents to live in units where I wouldn’t allow my family to live. So, it may mean more than one move,” Garrett responded.

Kramer requested the details of the best and final offer made by the developers to the agency. “Nothing has been carved in stone,” Lester replied. The details are still being worked out and have changed substantially since the offer was filed, he added, but promised to share more details.

The developers and agency have not been transparent about their plan, Commissioner Hamilton stated. ”The pictures I see of Greenleaf are very disturbing. No one should live in those conditions. I hear concerns about ventilation systems, rodents and lead. We need more than just patch jobs that are being done in each unit,” she added. Maintenance and repairs are slow and unaccountable, she charged. Where is the plan to get residents out of these deplorable housing conditions, she asked rhetorically.

Garrett strongly defended his agency’s track record. This is first administration to do in-unit inspections of all properties and a full risk assessment of properties, he said. “We don’t have the capital funding from the federal government to make the improvements at the pace that you are asking for,” he said. “The $90 million from the District needs to spread across all properties.”

The project will be done in phases due to financing, EYA and Bozzuto representatives stated, promising to share best and final offer as well as their current plan with commissioners.

Commissioner Litsky questioned Bozzuto about its plans for redevelopment at Westminster Church. The company is a major partner is that deal, which is not under zoning review. “I have no understanding of how 99 units at that site could be used for Greenleaf Build-First,” stated Litsky. Would those units be subtracted from the market-rate condominiums whose proceeds were pledged to subsidize 123 affordable units of senior housing planned on that site? Will Bozzuto commit to building both the towers planned for that property simultaneously as was promised in its zoning application, he asked.

Representatives of Bozzuto declined to make any commitments regarding the timing of their Westminster project citing the complexities of financing.

The commission unanimously agreed to send a letter to At-Large and Ward 6 councilmembers demanding the specifics on Greenleaf’s redevelopment.

Verizon Director of Operations Chad Thompson from Verizon addressed the issue of illegally parked contractor and utility vehicles. All the issues raised by the ANC chair have been dealt with, stated Thompson.

“When I approach a driver and tell them they can’t park there and the f-word comes out of their mouth, it is a problem,” stated Chair Edwards. “It’s unacceptable. I can only address that issue if I know who that person is,” responded Thompson. Edwards stated that he had taken dozens of photos.

“I will do everything in my power to have these illegally parked trucks ticketed and towed to Blue Plains,” said Edwards. “We will be asking for a real time contact for complaints about illegal parking.” The utility is hamstrung by union rules, Thompson said.

The commission unanimously agreed to send a letter requesting that Verizon create a parking plan for their fleet and have rules for parking in the District posted in trucks.

The commission voted to send a letter in support of the Marine Corp Marathon planned for Oct. 31, 2021.

Alan Brown of the Office of Human Rights gave a presentation on his office’s mission and programs designed to protect residents from discrimination in housing, employment and public accommodations.

Community member Steve Gross complained about the double parking and congestion under the highway on Maine Avenue SW next to the Fish Market. He asked that illegally parked cars be towed. Commissioner Litsky agreed it was a public safety issue. The commission, he stated, has raised it with Allen and the city.

Representatives of the US Attorney’s Office briefed the commission on the office’s work.

ANC 6D meets at 7 p.m. on the second Monday of every month. The next meeting of ANC 6D is for June 14 via WebEx. For more information and links to join ANC meetings, visit anc6d.org.