Here is a great opportunity we’re sure many Capitol Hill gardeners will want to embrace. The urns that line the lower section of Lincoln Park need planting this spring and summer and there are several openings for volunteers.  What a chance to give back to your community by adopting one of the urns. It gives you a chance for kinship with other neighbors who are helping out, lets you get out and enjoy nature, and makes the Hill a little lovelier.

The Urn Project
For decades, the 17 urns that stand about three feet tall in Lincoln Park had not been planted. Then in 2017, Karen Cohen, a Hill gardener, decided to do something about it.  Karen and her husband had relocated to Capitol Hill from Charlotte, North Carolina, a city that prides itself on its flowers and natural beauty.  Karen learned that the National Park Service owns and manages Lincoln Park, the largest park on Capitol Hill.  But NPS did not have the federal resources to plant the urns or maintain the flowers.  The park, which was originally designated by Congress in 1867 and was dedicated by Frederick Douglass, draws hundreds of Hill residents every sunny day.  People have picnics or practice yoga. Young children hold soccer practice. Nannies use the park as a gathering place and, of course, the dogs of the Hill love the park as well.

In 1974, the large statue of Mary McLeod Bethune was placed directly across from that of Lincoln and the two historical figures now are bookends for the urns.  Over the past four years, many neighbors have taken part in the

Adopt An Urn project.  In 2021, the volunteer-run project is looking for new volunteers to participate, especially as some folks have left the area during Covid-19 and with the sad passing of one of the project’s beloved gardeners, Bill Holleman.

Remembering Bill
Many Capitol Hill residents will immediately remember Bill, if not by name, then by seeing him and his constant canine companion, always a Weimaraner.  Weimaraners are known as the gray ghost and became very popular with the art of William Wegman and his dog Man-Ray.  Bill’s latest dog, Michah, was his fourth.  He was hard to miss at Lincoln Park with his dog, especially because he and Michah were always fashionably dressed and Bill stood over six feet four inches tall.  Lucky for us, Michah, adopted by a neighbor, now lives a block from where Bill lived, and his impressive wardrobe of coats, collars, and beds remain.

Bill moved to Capitol Hill in 1974 and started his interior design company, Nutshell Interiors.  Every Friday night, Bill would band friends together for a community dinner at Mr. Henry’s on Pennsylvania Avenue, SE.  Mr. Henry’s was the first place Bill dined when he arrived on the Hill, and in the early days he used it as his home office.  His friend Diana Allen says, “He was an amazing cook and his Thanksgiving table always was resplendent with flower arrangements, candles, customized place settings and sparking tableware.”  Bill had started his life of design at age eight. As a birthday present to his favorite aunt, he singled-handedly painted her room, made new curtains, and pulled up old linoleum to reveal eight-inch-wide chestnut planks.

Fittingly, Bill’s urn was always the most beautiful in the park.  His sense of style carried through to flower arranging featuring splashes of color that seemed to make the Mary Bethune end of the park light up. Bill’s spirit will be always be with us especially as we prepare the urns for a new season. Diana encourages those that knew Bill to raise a glass of his favorite Jack Daniels to toast his life.

New Season
Over the past fall months, the National Park Service helped ready the urns for this new season. As in any urban settings, rodents, including rats, have a way of finding their way into containers like urns. The rat population was especially challenging last summer. It turns out that the ever-popular sweet potato vine that grows quickly and makes for a lovely hanging plant in urns was part of the problem.  NPS took out all the old soil in the urns and placed metal mesh inside the urn, which should help solve the issue.  Fresh new potting soil has been added as well.

The other challenge is water.  The National Park Service is continuing to explore ways to provide water for the park, but so far there is none available. Volunteers must bring their own water to the park.  You may have seen gardeners pulling red wagons loaded with gallon water containers. One gardener, Peter Rothschild, has mastered a method of creating a yoke with two water bottles hanging off his shoulders. Many of the urn volunteers multi-task by watering as they let their dogs run with the 7:30 early morning crew.

Part of the fun of gardening is the chance to try different plants and plant combinations. This year, the organizers of the urn project have arranged for a Zoom virtual class on April 24th at 1:00 p.m.  The class will be taught by certified professional horticulturist Heather Wheatley.  She is the education coordinator for the Homestead Gardens of Davidsonville, Maryland.  The class is free and open to the public. Heather is an expert in sustainable horticulture and will have great tips on native and non-invasive plants. It will be a great way to start your urn adventure.

Are you ready?  Two Hill residents, James Grimaldi with backup from Elizabeth Nelson, are heading up the Urn Project this year.  As Elizabeth says,

“I love that each urn is a highly-individual reflection of the tender’s affection for Lincoln Park. So much more interesting than a bland, institutional mass-planting.”

One can sign up for an urn or the zoom class by emailing, friendsofcapitolhillparks@gmail.com.

Rindy O’Brien has volunteered with the Urban Project for three years, and finds it one of the best experiences one can have on the Hill. Contact Rindy at rindyobrien@gmail.com. 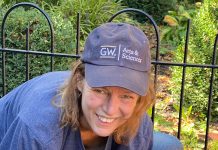 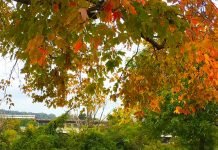 Beautiful Autumn Walks Along Our River