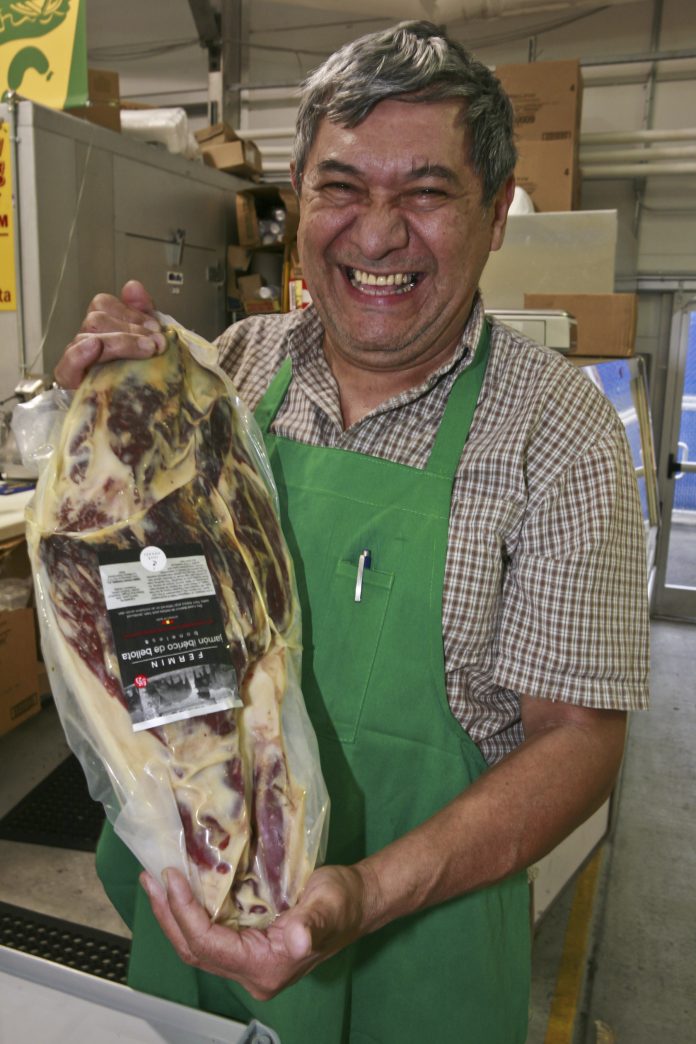 For the last 38 years one of the many pleasures of Eastern Market has been shopping at Canales Quality Meats, not just for the huge array of sausages, cold cuts, cheeses and prepared foods but for the chance to interact with the shop’s owner, Jose Canales.  Greeting every customer with warmth and courtesy, Mr. Canales has been sharing good cheer every bit as sustaining as the ham, horseradish and chicken soup he sells.

Mr. Canales grew up in San Miguel, a small city in El Salvador, and was in his second year of university, with the goal of becoming a lawyer, when political unrest and a six-month long general strike interrupted his studies. He had friends who had come to the States and were settled in Washington and so, with his father’s encouragement, he made the “difficult decision” to emigrate. Initially here illegally, he worked construction and lived in a small apartment.

Supplementing his income with a job washing dishes at the Market Inn in Southwest he met Consuelo, a young woman from Ecuador who was working the salad bar. They married In February of 1973. Five years later, in Baltimore, Jose Canales became an American citizen. “What a dream,” he says, remembering that moment.  “It made me feel like a million dollars.”

After thirteen years working construction, ten years of it underground building the Metro system, Mr. Canales decided he wanted a change and to establish a business of his own. Hearing there was a space for sale at Eastern Market he went to take a look and quickly made the decision to buy it.

It was challenging, he says. “My English was basic,” Canales recalls, and initially business was slow. He remembers the day when total sales came to $83. But he took night classes and, with that and daily use, his English improved. His wife and daughters, Elizabeth and Catalina, then 11 and 10 years old, would come in and help out.

And after his first, exhausting holiday season, “I knew I was in the right place. It didn’t take too long for people to open their arms and I felt welcomed by the other merchants and by the customers.”

His wife and daughters still come in sometimes to help out. Elizabeth is now a teacher of high school history and Spanish. Catalina became his business partner as manager of Tortilla Café, the small restaurant across the street from Eastern Market they founded in 2011 which serves Salvadoran and Mexican food.

As he passed his 70th birthday and began to think about retirement, Mr. Canales had hopes of sharing what he had learned about business with young people in the Latino community via a training program for teenagers. But the pandemic and other considerations scuttled that plan. Still, he will find ways to be useful and share his expertise. A couple of afternoons a week he will be helping Catalina at Tortilla Café.

What used to be Canales Deli will be in good hands with new owners Rosamaria Soliz and Marcello Maturano. Longtime assistants Loly Garcia, Carla Ramirez and Marvin Bowe will stay on. And at least three young people will benefit from the wisdom and spirit of Jose Canales – his grandchildren . Oliver is 13; he loves baseball and is an aspiring pitcher.  Marlee , 11, is a serious student and competitive gymnast. Jackson is seven and loves all animals, especially horses.

We Capitol Hill shoppers will miss Jose Canales and hearing him end each encounter with, “Have a beautiful day.” We wish the same to him.

Find ‘Everything About the Home’ at Patrick’s Fine Linen

Let JRINK Get You Juiced at Eastern Market