Capitol Hill is home to people from all walks of life — actors, Hill politicians, teachers, business people, writers, artists, retired ambassadors, you name it.  Everyone brings their own culture and traditions, sharing them with their neighbors.

When the Honorable Richard Hoagland retired from a very distinguished career in the US Foreign Service, he looked around the DC area and decided to settle on Capitol Hill in 2003.  He said he looked at a lot of Victorian houses, but happily settled on a more modern home at 12th and C Streets, SE.  Like many other retired Foreign Service employees, he brought back art, new food favorites, and seeds.  Richard, better known as Dick, share with his neighbors the very unusual plant seeds he brought home from his travels by planting them in his front yard, and in a triangle park space across the street.

Farming in his history
Dick comes from a long line of gardeners, and remembers spending time with his grandmother in Ft. Wayne, Indiana. “I think watching her garden ingrained my love of flowers and gardening,” says Dick. “As I served as ambassador in south and central Asia for most of my diplomatic career, I always enjoyed gardening around the residence, and I began collecting seeds of some of the more unusual plants,” Dick reports.  He was US Principal Deputy Assistant Secretary of State for South and Central Asian Affairs.  He served in Pakistan, Kazakhstan, Tajikistan, Turkmenistan, Jordan, Syria, Afghanistan, and Armenia.  Dick is grounded these days with COVID, but stays on top of international affairs through Zoom calls. He is currently a board member of the Caspian Policy Center in DC.  “While I miss traveling, I love my Hill neighbors and watching my little garden grow.”

Bringing Castor Beans to the Hill
If you walk down 12th Street, SE, and turn on C Street, you immediately see a

Triangle Park midway on C Street, with a very tall plant at the corner.  It is leafy green and spreading across the point of the park.  The castor bean is a

semi woody plant that can grow up to 40 feet tall.  In summer, the C Street castor bean is at least 12 feet tall with a lot of flowers and bean seeds forming at the top.  According to Dick, it is an annual, and Dick starts every year with seeds in May. He actually collected the original seeds from the American Embassy in Turkmenistan in 2007. In addition to the plant in the public park, the castor bean plants also are at his front door.

One of the reasons the castor bean plant does so well is that DC shares a similar temperate climate with central Asia. After the first freeze, Dick cuts off the tops and all the leaves but keeps the bright red stems up for a few more months. They are especially beautiful against the (increasingly infrequent) snow in winter.

Castor beans are not often grown because the hulls of the seeds contain the deadly poison ricin.  Making ricin powder is, according to the Centers for Disease Control and Prevention (CDC), technically a difficult and complicated process, so it is pretty unlikely that the castor beans on these plants pose much of a threat. The American Society for the Prevention of Cruelty to Animals (ASPCA) does list it as highly poisonous for dogs and horses, should they ingest a large number of the seeds. Some states ban the plant, but Dick says he has seen the castor bean plant in garden settings around town and in the Smithsonian gardens.

The Devil’s Weed or Datura Plant
Alongside the tall castor bean plant is a small flowery plant that also produces poisonous seeds.  It is known by many names–thorn apples, Devil’s weed, Jimson weed, moonflower–and is more formally known as Datura stramonium. Georgia O’Keefe painted the Jimson weed on numerous occasions, and it grows wild in the Southwest.  The large usually white flower is part of the nightshade family and can spread to a width of 6 feet.  It needs little garden maintenance and spreads quickly. Often birds spread the seeds and they can remain dormant for years before sprouting. The plant will self-seed.

While the entire plant contains some level of toxicity, the small black seeds are responsible for the hallucinogenic effects of the plant. The seeds can produce delirium, hallucination, and bizarre behavior that can last for several days. Centuries ago this plant was used to treat spasmodic disorders, epilepsy and mania.  It was also used as an anesthesia before surgery. In many cultures, it is regarded as sacred and magical and is an ingredient used in voodoo.  Consuming any part of the plant can be fatal.  It is important not to add the seed pods to your compost pile.

The white flowers brighten this corner of the Triangle Park, and are a nod to the plants found wild in central Asia.  The fact that they can thrive pretty much unattended also makes them successful in this small park, as there is no water source.  Dick waters them from a stretched hose from his house in the early stages of growth, but then lets them go.  DC’s summer 2020 weather was perfect for them.  Now we can enjoy the beautiy of the stalks before the cycle begins again in May.  East meets west on Capitol Hill, thanks to Dick’s sharing of his seeds.

Rindy O’Brien is a long time resident of the Hill, and enjoys all the different 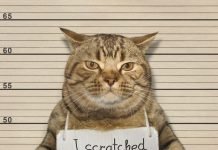 Cats and Furniture: A Roundtable