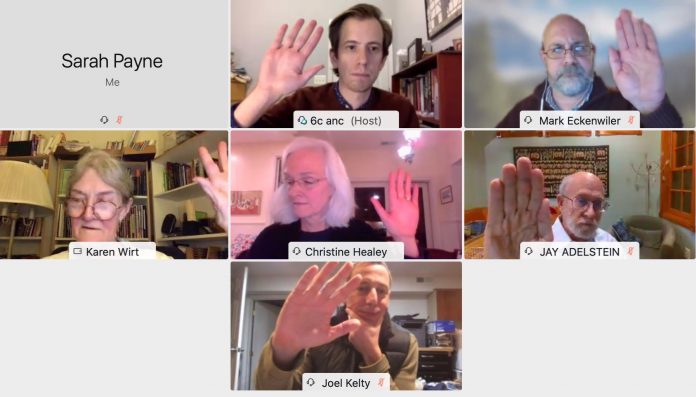 Application for Internet Alcohol Sales
The ANC voted to protest a liquor license application from Bro Weekend Collective (25 K St. NE) in pursuit of plans to sell beer, wine and spirits online out of a U-Haul self-storage facility. They are applying for a retailer’s Class A internet-only license which allows them to sell spirits or beer, wine and spirits over the internet. The license would not allow them to sell to the public from their premises.

Commissioner Joel Kelty spoke in opposition to the application, citing the licensee’s plans to store their product in a U-Haul facility. He suggested the ANC commission send letters to the Department of Consumer Regulatory Affairs (DCRA) regarding the storage of products in a self-storage facility.

“Is it legal to store distilled spirits in a U-Haul facility?” Kelty asked. “I’d have to check with the Construction Code. That probably classifies as a high hazard occupancy because it’s flammable.”

Opposition to Rear Addition
The commission voted to send a letter to the Board of Zoning Adjustment (BZA) expressing concerns with an application for special exception from lot occupancy and rear yard requirements to construct a three-story rear addition at 1165 Third St. NE. The application was initially brought before the ANC Planning, Zoning, and Economic (PZE) Development Committee in November. The ANC supported their opposition to the application, saying there were no letters from adjacent neighbors or sun/shade studies. They also argued the penthouse structure did not comply with setback requirements.

PZE Chair Mark Eckenwiler said the applicant returned before the committee January with some “modest” adjustments, including a partial sun/shade study and drawings showing a revised penthouse plan. The committee again opposed the application, noting that there were still no letters of support from neighbors and that the project still lacks compliance with penthouse zoning requirements. They also argue that the rooftop addition is not in keeping with the streetscape.

Views on Changes to Penthouse Regulations
The commission voted to support a letter to the Zoning Commission (ZC) offering views of the ANC on proposed changes to the definition and regulations concerning penthouses. The definition would remove roofless structures and create new terms for features without roofs. The committee called for clarification on certain terms, such as “roof.” It also asked that changes to the setback requirements should not apply to buildings in the RF zones in order to preserve protection to rooftop elements such as cornices.

Finally, in order to open rooftops to bigger mechanical spaces, the proposal would remove the area limit on penthouses, currently capped at 1/3 of the area in zones with a three-story height limit. The PZE suggested that ZC restore a cap of some kind, expressing concern that applicants would build large mechanical spaces and later convert these to living spaces.

ANC 6C will meet next on Wednesday, Feb. 10 at 7 p.m. virtually via Webex. Find the link to the meeting, agendas and more information about the commissioners at www.anc6c.org.

Sarah Payne is a History and Neuroscience student at The University of Michigan interning with Hill Rag. She writes for and serves as an assistant news editor for Michigan’s student newspaper, The Michigan Daily. You can reach her at sarahp@hillrag.com.

Hotline Launches for Survivors of Sexual Assault by Clergy