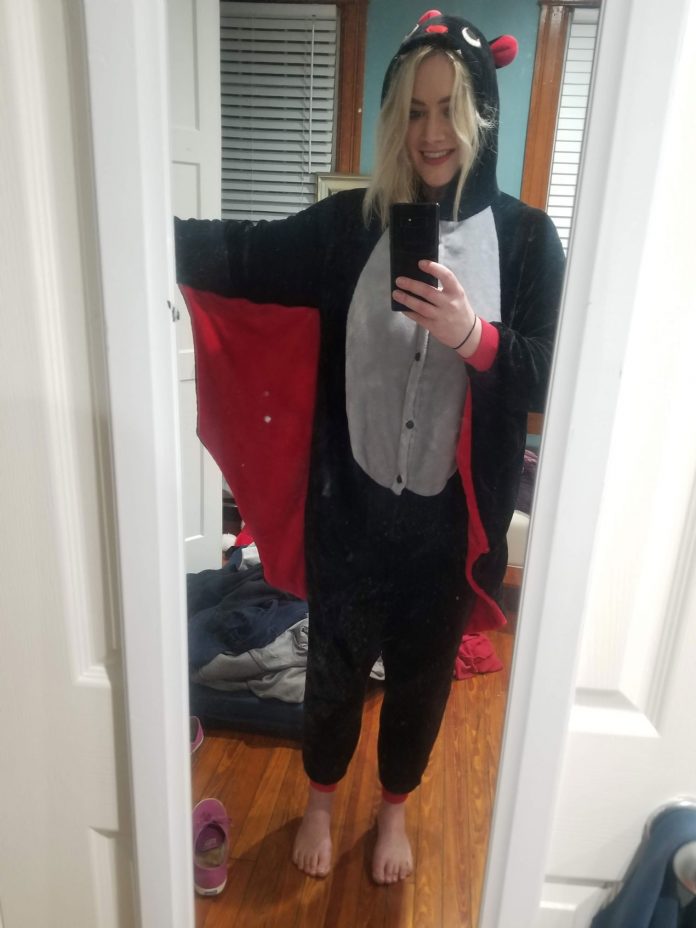 “Because who gets dressed in proper clothes anymore, my partner ended up interviewing for an IT job in a parakeet onesie. And that was just today.”

This was one of the comments I received when I solicited Hill residents for stories about their experiences with dating during the pandemic.

Another replied, “It’s non-existent,” and yet another questioned if anyone was actively dating during COVID-19, and how these magical people pulled it off.

These were in line with my own thoughts on dating in a time when, according to one Metro advertisement, we must keep a panda’s distance away from anyone outside our households.  I barely had enough patience to date pre-pandemic, and now date-appropriate activities are largely off limits, and we can’t even get close enough for the awkward first date handshake or cheek kiss goodbye (much less any other ahem physical activity)? No thank you.

And strangely enough, I also came into ownership of an adult animal onesie (specifically, a bat onesie, something I got from a neighbor through a Hill-based Facebook group), so I felt a kinship with that commenter. She gets it. Who in the world has the energy these days? Was anyone really pulling this off?

My own limited experience with pandemic dating was not good.  I went on one 45-minute date at a whiskey bar right before lockdown happened in March.  It went decently and a few weeks in, he suggested a virtual date: we could talk and sip cocktails over a screen.  This did not sound too bad and I was determined to make more of an effort than I had historically.  Even if I had not felt any special sparks during our brief in-person date, I’m 35 and not getting any younger.

These Zoom dates entailed well-intentioned but clumsy serenades on a guitar, awkward tours of each other’s apartments when conversation petered out, not knowing how to end our virtual “dates” and the realization that I needed a third of a bottle of bourbon to make it through each one. I decided this was not for me: whether it was the person, the medium or both.  The whole experience was cringe-worthy and made me want to hide under the covers and spend the pandemic binge-watching all 21 seasons of Law and Order: SVU (in my bat onesie, of course).

The weirdness of trying to “break up” with someone over Zoom, someone I spent barely three quarters of an hour with in-person and was not even really dating, cemented my outlook.  I concluded that being single was…just fine. Like many, I decided I would foster dogs and cats for distraction and comfort until it was safe to be in a new person’s presence without a mask or an internet connection.

I was curious if others had similar experiences, or if I was an outlier, so I asked neighbors via social media. I waited a few hours, expecting my inbox to be mostly disaster cases, virtual dates gone awry and the ilk. Dating during a pandemic can only add extra layers of desperation and awkwardness and I was more than ready to commiserate.

Imagine my surprise when stories of a different sort starting trickling in.  It turns out love does and can prevail, and even if these accounts were not the darkly funny ones I was expecting, with each one I found that even my cynical outlook on dating was brightening.

One resident, Shanelle, described how dating virtually was actually “an amazing way to take the pressure off of first dates and awkwardness.”  The near total lack of shared in-person activities motivated her to find a connection.  She and her now-partner did dinner dates, drink dates, coffee dates, movie dates, game dates: all virtually (Shanelle’s partner even found an online escape room that they did together.)  Shanelle says the slow burn, early virtual days helped foster a relationship based on communication, love and trust.

She wrote “If you start dating someone during a pandemic, you have to trust them, because if you don’t, it could literally kill you.”

Dating virtually eventually led to their first socially-distanced, masked date (a hike), which gave way to road trips, miles of more hiking, sunset-watching, and a committed relationship.  “If we can fare through 2020, with all its shitstorms, when the world does ever return to normal and we can do activities, concerts, comedy shows, bars, etc., I can only imagine that our connection will grow; we will have more to bond over and build upon.”

Another Hill resident ended a decade-long relationship in 2019 and spent the early months of the pandemic holed up with her family in Georgia.  She had never used a dating app before but was willing to give it a try. Being a lesbian living in rural Georgia, she quickly found that her options were, shockingly, severely limited.  She waited until she returned to DC to give it another go and met her current partner her first weekend back in the city.  They met on a park bench and talked for hours. She describes a moment where her now-girlfriend lightly touched her arm and it felt electric: “I’m not sure if it was all the physical and social distancing that I’d been doing up to that point or if it was meant to be!” They have been together eight months now.

Finally, Jennifer and Chris were living parallel lives a mile away from each other when they matched on a dating app the same day in March that the World Health Organization declared COVID-19 a global health pandemic.  They had made plans to get tacos that weekend, and instead, Jennifer found herself packing up and driving to Wisconsin, thinking she would only be gone for maybe three or four weeks before all returned to normal.

Jennifer asked for a taco date night raincheck, but Chris asked for a FaceTime date, something that Jennifer had to warm up to.  She ended up agreeing and was surprised that the conversation lasted over an hour.  He asked for another FaceTime date the very next day. A little wary of his eagerness, Jennifer still agreed.

As the pandemic bore on, they began sending care packages to each other: “He sent me a puzzle and flowers, I sent him a smorgasbord of Easter candy, and our conversations grew deeper and deeper. I found myself marveling to have found this guy who, as my friend put it, ‘wasn’t too cool for school’ and that this long-distance courtship was allowing us to get to know one another in slow and significant ways.”

Jennifer travelled back to DC in early May, and Chris was finally able to collect that first-date raincheck, which was not tacos, but a rooftop dinner of takeout from Cane and sunset-watching. He introduced her to his dog.  It was not long before they were introducing each other virtually to friends and family, and Chris convinced her to move in with him.

They were engaged in August and married in October (on the same rooftop as their first in-person date).

“We’re now expecting our first child and despite the continued challenges of the pandemic and political horror in the city we love, we have so much hope for the future,” Jennifer writes.

It appears that dating within the confines of a pandemic has given credence to the adage “good things come to those who wait.” It is heartening to see that people have eked out some happiness and found love against extreme odds.

Maybe I’ll give dating during the pandemic another attempt… but I’ll never give up my bat onesie (or Law and Order marathons)!

The Owls are Watching