A Capitol Hill resident has started a petition opposing the installation of permanent fencing around the Capitol.

In a release dated Jan. 28, United States Capitol Police (USCP) Acting Chief Yogananda Pittman said that in light of the events of Jan. 6, “vast improvements to the physical security infrastructure must be made to include permanent fencing and the availability of ready, back-up forces in close proximity to the Capitol.”

In pre-COVID times, Hill resident Allison Cunningham would cross the Capitol grounds to walk to work, or gather there with neighbors to watch fireworks. She and her now-husband took their engagement photos at the Senate Grotto, she said. Those kind of memories are not unique among Capitol Hill residents, she said.

“The events of January 6 were horrific, but building a permanent fence to keep District residents and American citizens further from the Capitol grounds is an ineffective security strategy and punishes the wrong people,” she said.

Cunningham noted that since DC residents suffer from lack of congressional representation, there is little they can do when leaders in Congress or the Capitol Police propose changes they oppose.

“I started this petition because access to the Capitol grounds is such an integral part of life in our beautiful city and Congress should know how important these decisions are to those of us who call DC home,” she said.

Cunningham posted a petition on change.org to demonstrate just that. She put it up on Jan. 28, the same evening as the USCP Chief released her statement. As of 2 p.m. the next day, it already has more than 1200 signatures.

“Security failures of January 6 would not have been prevented with permanent fencing,” the text of the petition reads. “In fact, walls and fences proved ineffective deterrents to the insurgents who stormed the Capitol that day.”

The text goes on to point out that, in addition to being an ineffective, the fencing does not do any harm to “the domestic terrorists who engaged in the attack, nor the law enforcement entities who failed to adequately protect the Congress, nor do they change the systemic governance issues preventing DC from protecting itself,” it reads.

“No, a permanent fence punishes we, the people, from seeing and accessing the People’s House.” 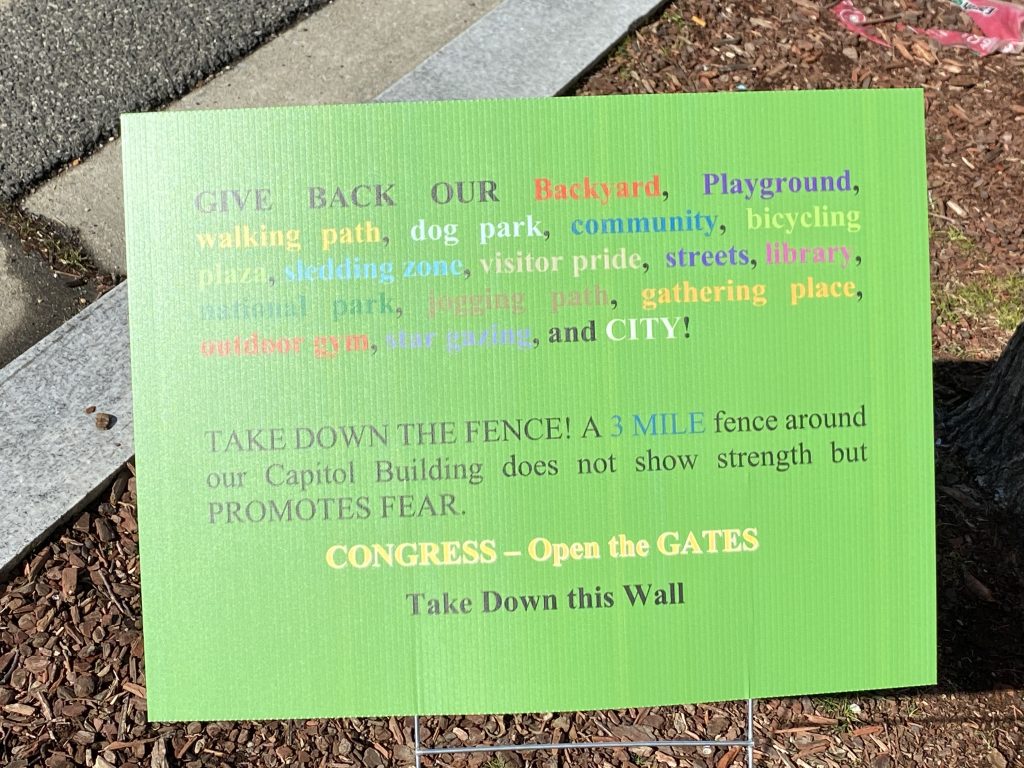 Many Hill residents expressed similar outrage on social media. Local residents posted photos of themselves enjoying the Capitol grounds, from playing with children and pets to the neighborhood to the 2015 “sled-in” protesting a ban on tobogganing on the grounds.

The Capitol Grounds are, of course, under Federal jurisdiction, meaning that the District’s Mayor and Council members have no power over these decisions. The District has no voting representatives in either the House or the Senate, meaning the voice of neighbors who live right on the edge of the Capitol Grounds also do not have a vote in Congress.

Still, many DC Councilmembers have voiced their opposition to the idea of a permanent fence. Councilmember Charles Allen (Ward 6-D), is representative for the neighborhoods around the Capitol. Allen wrote a letter to USCP Chief Pittman een before the release of her statement, discouraging the idea of permanent fencing and encouraging USCP to seek the input of neighbors.

At-Large Councilmember Christina Henderson said the blame for events of Jan. 6 did not lie with the fact that there was no fencing around the Capitol, but rather because law enforcement did not take the threat of violence seriously, and failed to prepare. “Deal with that,” she tweeted Thursday. But don’t punish the DC community because of that failure to act.”

January 6 didn’t happen because the Capitol grounds are not permanently fenced. Jan 6 happened because law enforcement failed to take a real threat seriously likely because of who was involved.

Deal with that. But don’t punish the DC community because of that failure to act.

What are your Capitol Hill memories? Neighbors are sharing them online, tagged #dontfencedc.

Learn more about Cunningham’s organization and what you can do by visiting dontfencethecapitol.com

CHV Gala Goes to the Moon – But Will Stay Grounded