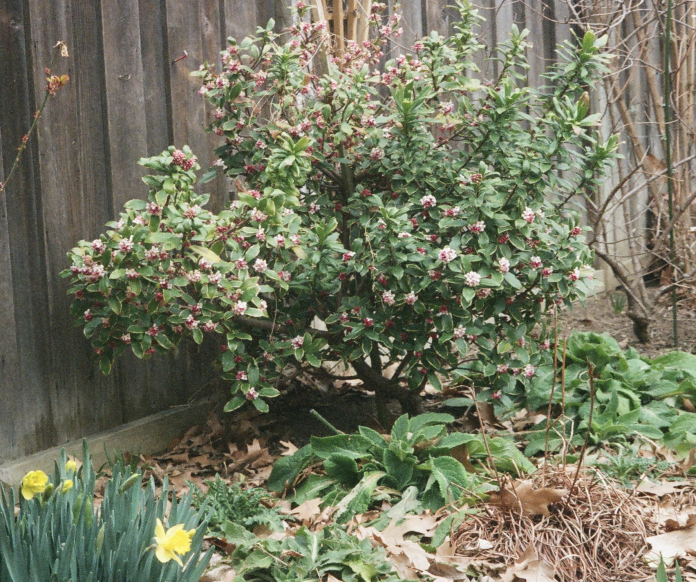 This is a February photo of our beloved broad-leafed evergreen named DAPHNE, from whose sudden death years ago I have still not recovered. My husband says I am crazy not to plant Daphne again â€“ itâ€™s only a plant. Do you agree they are unreliable?

Yes, but listen to your husband. Botanist Dr. Michael Dirr says, â€śA southern landscape without fragrant Daphne is really not a garden!â€ť It is beautifully evergreen, and â€śâ€¦its wafting scent from January to April is truly a sign that all is right with the world.â€ť Daphne prefers shade or part sun, shelter from cold wind, composted organic matter in the soil, and excellent drainage. Again, Dirr: â€śMany die for no explicable reason. It has been my pleasure to lose more than I can count on fingers and toes, but I continue to plant.â€ť

I bought a cyclamen that produced dozens of brilliant red flowers indoors from November 2019 until April 2020. In May I put the plant in a shed and withheld all water, allowing it to go completely dormant.Â  In early September, I brought it out to the backyard and began watering and fertilizing. It quickly produced new growth.Â  In October, I returned it to a cool, south-facing bedroom where it did so well the year before. As of January 6, 2021, the plant has put out 15 or so healthy-looking leaves, but no flowers.

You have done everything right â€“ everything. Cyclamen benefit from being placed outdoors in late summer, but brought indoors before the threat of frost. They like a cool temperature (as low as 40 degrees at night, 65 max. during the day) with ample, but indirect sun.Â  Now you must fertilize. New buds will soon appear with the addition of a water-soluble, high phosphorus plant food. Use a fertilizer in which the middle number of the three is the largest. The middle number represents phosphorus, the element that induces flowering. Something in the nature of 0-10-10 would be good.Â  The first number is nitrogen â€“ of which you need little or none. ). After your cyclamen has finished flowering this year, withhold fertilizer and all watering, as you did before. Place in a cool room out of bright light. After two months the leaves will be completely yellow, and can be easily separated from the tuber. At this point, repot into a container about 1â€ť wider in diameter than the old one, using a mix of one part packaged potting soil and one part perlite. Allow the top half of the tuber to protrude out of the soil. Water sparely, never to the heart of the plant (to prevent tuber rot) until September, when you can move to that cool shed.

For its JANUARY 13, 2021 ZOOM MEETING about horticulture in Hawaii, please visit capitolhillgardenclub.org.

Feeling beset by gardening problems? Send them to the Problem Lady c/o The Hill Rag. Your problems might prove instructive to others, and help them feel superior to you.Â  Complete anonymity is assured.

Cats and Furniture: A Roundtable 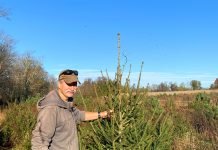 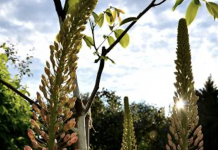 With Much Ado, Shakespeareâ€™s Voice Comes Roaring Back

Capitol Hill Is Getting Older