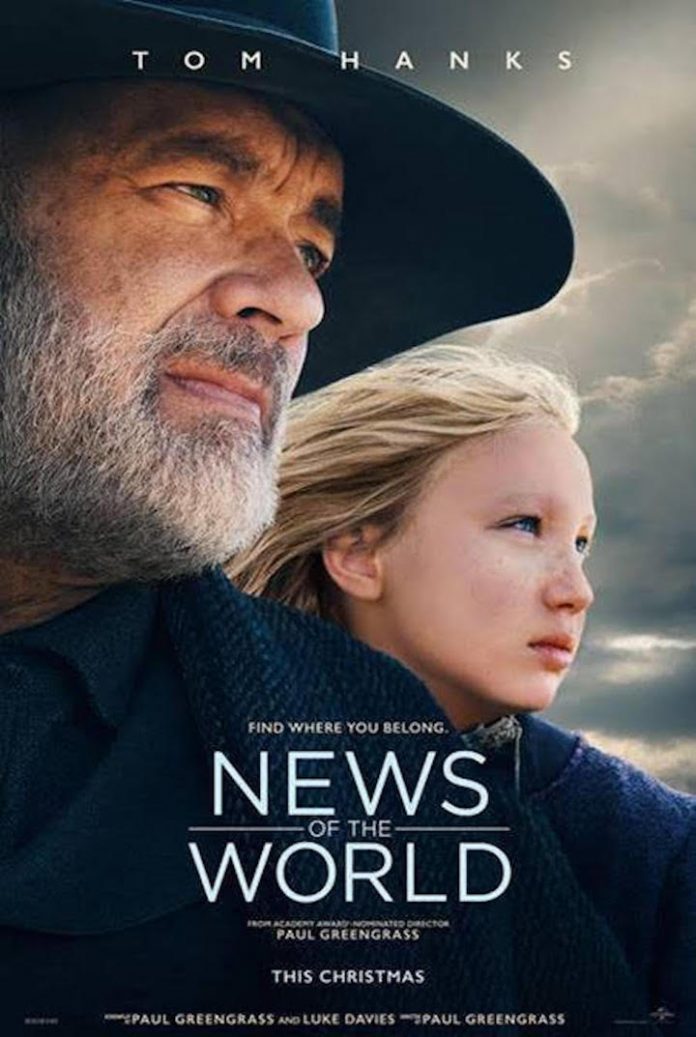 News of the World
“News of the World” is an American western co-written and directed by Paul Greengrass. It follows a laconic Civil War veteran (Tom Hanks) who decides to return a young American waif who was been taken hostage by Native Americans as a toddler back to her last remaining family members in West Texas. The film is clearly meant to echo the spirit and flavor of classic American Westerns, like “The Searchers,” (especially) as well as “True Grit” and “Days of Heaven” (The film, in theaters at Christmas, is rated  “PG-13” and runs 118 minutes).

The film is dominated by the figure of Hanks as the Union Army captain named Jefferson Kyle Kidd, who has settled in Texas five years after the War and ekes out a living as a itinerant reader of current newspapers for folks starved of information from the outside world.  Fake news, indeed; this is the only news these people get, delivered in dim lecture halls and tacky theaters around the state in Kidd’s gentle but expression-rich cadence.

Roaming the brush-filled countryside outside Wichita Falls one day, he hears heartfelt cries, which turn out to be those of the young Johanna (Helena Zengel) stolen some six years before, then raised by Kiowa Indians as one of their own. She speaks Kiowa, but has a German tinge to her language lingering over from her birth family. Her remaining kin, an aunt and uncle, live days away, hundreds of miles through the Texas Hill Country.  The pair are not well-equipped, and the landscape is harsh, but they struggle on in Kidd’s ramshackle wagon.

The local audiences they play to are generally appreciative and grateful for Kidd’s presentations, but difficulties intrude for them, such as a trio of lowlifes who want to “buy” the girl, and chase after the two to obtain her, ending in a blistering shootout in a local canyon.  One friendly lady saloon owner Gannett (Elizabeth Marvel) is kind to the wanderers before they continue on the road. Joanna eventually even gets into the act and begins to learn some English from the Captain.  Eventually, they get past the worst of the hardscrabble plains and reach the farm of Joanna’s kin. Kidd leaves her in their care, but returns to find her bound and tied up like stock. Other calamities occur, like the wrecking of Kidd’s wagon, leaving the pair footbound with no water in the wilderness.

This is new territory for the British Greengrass, who has made memorable films in the action genre (three “Jason Bourne” films) and docu-thrillers (“United 93”and “Captain Phillips,” also starring Hanks).

He has clearly studied John Ford’s 1956 epic “The Searchers, “ one of the great Hollywood Westerns.  Rather than shoot, however, in Monument Valley or the Four Corners of the Southwest, his vision looks out over the landscape of New Mexico, a less picturesque but harshly beautiful terrain. The plot line parrots the original film, with the kidnapping by Indians of a young girl and her embrace of an Indian culture. Even exact details—like the link of a simple doll to the child, her struggles to be understood in a different language, and a late shot of an open cabin door framed by black side panels which directly echoes the Ford film.  All this plus the rhythms of the plains on horseback or rustic wagon, plus the reticence of men against the grandeur of landscape evoke the earlier work.

This character of Hanks in “News of the World” is on the crusty, surly side, not the engaging, droll side. While he still is a storyteller and a practiced entertainer, the vicissitudes of war and a hard life (he has lost his wife), have left him wary and guarded, quick to smell danger and ambush, to which he is able to react with good sense and tact. Young Helena proves a good foil for him, her plain face and straight blonde bob showing watchfulness and skepticism in her new circumstances. Only at the end, when she has assisted Kidd in his show, do we see her break out in a rousing smile at the audience’s reaction. Looks like she may be hooked. 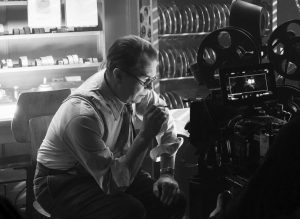 Mank
The new film “Mank” (now out on Netflix) may be hard to recommend.   Its whole premise rests on familiarity with  the creation of a film script,  a famous one to be sure, that of the 1941 RKO film “Citizen Kane,” Orson Welles’s spectacular debut as a director–at 24. Questions about its creation , especially its screenplay, have lingered for years and came into greater focus 30 years after the film was launched, in 1971, when noted film essayist and critic, Pauline Kael, scrutinized the film in articles in The New Yorker magazine in February of that year. The essays were later turned into Kael’s 1971 book. “Raising Kane”(The film, released on Netflix in early December, is rated “R” for language and runs 132 mins.)

Kael’s thesis was that the essence of “Kane” was written by long-time Hollywood veteran, Henry Mankiewicz—nicknamed “Mank”—rather than the film’s producer, director, star Welles. The film fictionalized the extravagant life of one of the greatest editor-publishers of the day, William Randolph Hearst, head of the nationwide Hearst empire of newspapers and journals. Mankiewicz, at the time past his prime in Hollywood, was hired by Welles to write the script at what amounted to a retreat in the vacant desert up the California Coast, near Hearst’s grandiose estate, San Simeon.

His babysitter was John Houseman (Sam Troughton), a longtime colleague of Welles, told to keep an eye on the “Boy Wonder,” and he is also overseen by a hired secretary, Lily Collins (Rita Alexander), paid to type and report on the script’s progress to Houseman. On off-days, Mank pals around with movie buddies at San Simeon, having languid feasts with Hearst (Charles Dance), studio head Louis B. Mayer (Arliss Howard), and MGM star Marion Davies (Amanda Seyfried). Welles checks in periodically by phone.

My warning at the opening of this review about “Mank’s” limited appeal stems from the fact that this movie is so dependent on knowledge and awareness of “Citizen Kane” itself; the film is littered with stories, anecdotes, and images ripped from the original “Kane” itself.

It’s hard to make a strong case for Gary Oldman’s acting (as Mank) because he isn’t much of a protagonist; he is mainly acted upon. He is also a confirmed drunk, not the most interesting character for a film’s lead.  Almost a featured player in the movie is the parade of Scotch bottles arrayed on a desk in the study where he writes. For who was supposed to be one of Hollywood’s wittiest writers, he is rarely funny in the film and gives every sign of a washed up scribbler running out his string. (The film was written by Jack Mankiewicz, the writer’s’ father).

Director David Fincher clearly means to send a love letter to vintage Hollywood with this picture, and he does, in part, shooting the lives of the period stars in a gauzy, black-and-white palette that evokes the aura of the late 1930’s and early 1940’s.  In a way, the imagery  by Erik Messerschmitt is too gauzy, and you wish the camera crew had pumped up the HD a bit, partly because the original Kane was so crisp. Seyfried is adequate as Davies, a rousing comedienne in her time, ranging between silly and simpering.  The occasional appearances of Welles, played by Tom Burke, are welcome because the actor has a good hold on Welles’ booming voice and burly presence.