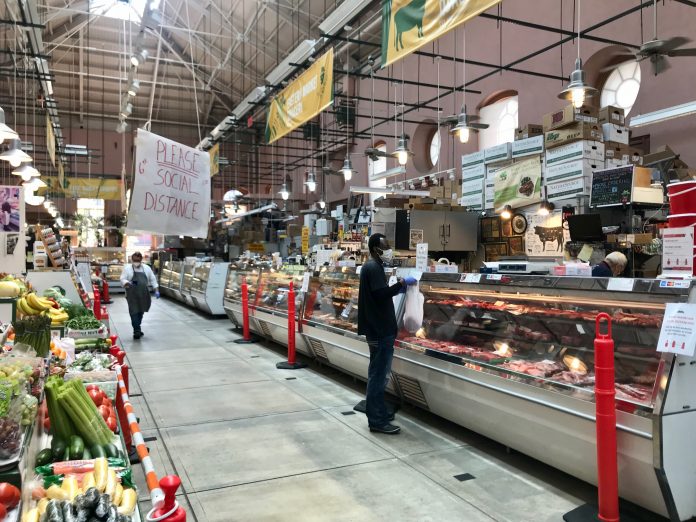 In a critical moment for Eastern Market, a new toolkit has been completed to help ensure the long-term viability of the icon at the center of our community.

The Eastern Market Strategic Plan, commissioned by the Deputy Mayor of Planning and Economic Development (DMPED) almost a year ago, was released to the public Oct. 7. The plan, budgeted at $300,000, was commissioned from Hill-based consulting firm Architrave, and was endorsed by the Eastern Market Community Advisory Committee (EMCAC) in a letter that asked for details on specifics as it called for speedy implementation.

What’s Inside
The 100-page report, issued Oct. 7, comes with an additional five appendixes containing an impressive 300-pages of information and data about the market and the area economy and makes 12 recommendations supported by 52 strategies.

The plan encompasses the Eastern Market Special Use Area (EMSUA), which includes the market inside the building, an ecosystem of outdoor markets and the brick and mortar businesses in the area.

It calls for major changes at the market, including replacing existing management (the Department of General Services advised by EMCAC, with a nonprofit public-partnership board composed of DC government reps, stakeholders, and community members. Elements of the plan are to be coordinated by an implementation committee, which is to be made up of similar membership. The study also recommends EMCAC be reconfigured “to ensure equal representation by individuals with a stake and expertise in the operation of Eastern Market.”

The plan calls for a reconfiguration of the stalls in the South Hall and a rethinking of the organization of the outdoor market. There are to be additional events, such as musical performances, and placemaking such as beer gardens, tables and chairs. Marketing is to be emphasized, primarily through the hire of a full-time marketing director, but also through signage and campaigns. Online shopping options are proposed, together with the creation of a customer hub.

A Toolkit
Architrave Project Manager Scott Betz said that the firm sees the plan as a toolkit, providing goals for Eastern Market, a strategy to implement them, and the data to back up the recommendations. The report is based on more than 3,800 responses to a community survey issued in January, workshops with stakeholders, and studies of five similar public markets throughout the United States.

Some of these recommendations will sound familiar to long-time followers of Eastern Market management, said Peter J. Waldron. Waldron said that while the report is well-done, little in it is a surprise. “They’re all recommendations the very able EMCAC members have raised and discussed,” he said. “But EMCAC is an advisory body, so it can’t make the decisions —the city and the Department of General Services (DGS) does.”

Waldron has covered Eastern Market and monthly EMCAC meetings for the Hill Rag for the last 13 years. He was also part of the Eastern Market Task Force, a committee commissioned by then-Ward 6 Councilmember Tommy Wells to study market management and make recommendations for new oversight. That report, released in April 2011, also recommended that legislation governing Eastern Market be changed to allow for management by a not-for-profit quasi-public entity composed of a board of directors of 11 members. That legislation stalled in council.

Who Implements the Implementation Committee?
While that recommendation may be the same, the path laid out by the 2020 Strategic Plan is not as developed. The 2011 task force proposed not only who should be members of such a board, but also offered guidance on appointments and term lengths. This year’s plan is vague on those details, instead proposing that an implementation working group, composed of members of EMCAC, DGS, and merchant vendors lead and coordinate the implementation of the Strategic Plan.

Without clear guidance for who should be on the committee and who should select members and provide leadership, some fear the plan could fail before it is initiated. The absence of clear direction for the Implementation Committee is a problem, wrote EMCAC Chair Donna Scheeder in a letter to DGS Director Keith Anderson, because it is charged with coordinating and implementing the strategies.

Betz said that Architrave was deliberately vague about committee composition. “In terms of a working group, we didn’t want to be overly prescriptive about that, because that’s sort of an implementation thing. We didn’t want to decide who sits at the table and who doesn’t,” he said.

Architrave Associate Architect Owen Weinsten said that the role of a strategic plan is to lay out specific goals and strategies that have been proven to work. “Our role was never to give people a step-by-step walk through, because we’re not managing implementation and so that would be inappropriate for us.”

Anderson said that since the plan was released in October, DGS has already initiated work on five of the 52 initiatives with the Implementation Committee slated for creation in January 2021. Anderson did not provide details on how the committee would be formed.

He said that DGS supports an effective approach to managing and continuing the successful operations at Eastern Market.  “Market operations at public markets run by third-party non-profit entities are standard and can also be very successful,” Anderson said, noting that DGS is pleased with the level of meticulous research that went into the Strategic Plan.

Financial Impacts
While the plan contains a market analysis, pointing to areas where retail is lacking in the area, it does not contain a financial analysis, a fact pointed out in the EMCAC letter to DGS and by Waldron. “There is no real sense of, if you do this, this kind of revenue will come,” he said. “By definition, a strategic plan is projection, and that usually means money, dollars —there’s nothing.”

Waldron said an easy place to do this would be to project the benefits of a validated parking agreement with a neighboring lot, such as the Colonial Parking lot or the underground parking garage in the 600 block of Pennsylvania Ave. SE, or in projecting the increased potential revenue potential of the North Hall, for instance, if legislation were changed to allow political fundraisers.

Architrave’s Weinstein said that every time there were real numbers that could be applied, they were utilized, and the report includes a chart showing the relative impact of each recommendation on the operating budget. Much of the research began before COVID-19 hit, he added.

“I can understand the desire that folks would have for like, ‘do this recommendation and it will double revenues for the merchants,’” he said. “I think the reality is it’s a little disingenuous for anyone to try to make a concrete dollar prediction in that category.” What is possible, Weinstein said, was to make recommendations that are proven to have a financial impact at other markets.

‘A Lot of Really Neat Stuff’
“There’s a lot of really neat stuff in it that will help us, and make a nice market,” said Union Meats owner Bill Glasgow of the strategic plan. Glasgow started at the market 59 years ago and now represents the South Hall Merchants on EMCAC. He said many recommendations in the strategic plan would really help the market grow, pointing in particular to the emphasis on marketing and a move to dedicated management, which he said would improve market efficiency and adaptability.

However, Glasgow also said he has concerns about the way some of the recommendations could affect fresh food merchants. Some public markets used as examples in the plan, like Seattle’s Pike Place, are not analogous, he said, partly due to size or because they are not primarily fresh food markets. “It’s a tourist trap, that’s all it is, they don’t sell meat,” he said of Pike Place. “We’re a working market that serves our community.”

Some of the recommendations in the plan would hurt the merchants, he said, such as suggestions to reconfigure the south hall by reducing the size of stalls so more merchants can be added, or the suggestion that merchants sign 3-year leases, which Glasgow said will make loans impossible, instead of long-term leases currently mandated by legislation. Glasgow said the plan de-emphasis of parking ignores its role in facilitating grocery purchases, especially for older people.

Both Eastern Market and the community have long benefited from one another, Glasgow said. “We know we’ve made it this long because of the wonderful community base,” he noted. “I just want to make sure when this is all said and done, we can all survive, and thrive.”

Learn How to Finance or Expand District Small Businesses