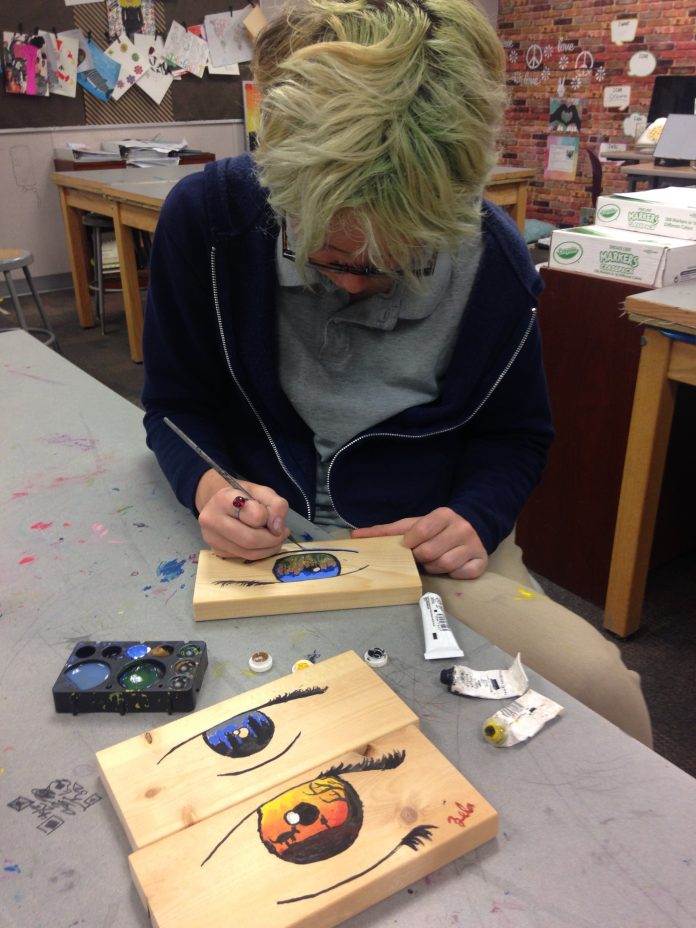 Fans of the Junk Art Club at Eliot-Hine MS will be pleased to know that the pandemic has not prevented them from staging another show at Hill Center.  Even after the schools shut down in March, the artists were able to put the finishing touches on five new pieces. As with the club’s first two shows, the work speaks to the effect of human activity on the environment.

The timely topic presented an opportunity for learning as well as self-expression. One student reported that she “didn’t think climate change was really that big of a deal” until she started researching it for this project.  Many were unfamiliar with the work of Greta Thunberg, an internationally known Swedish environmental activist only a few years older than they are. As they became more aware of the seriousness of the issue, they want to share their concern with others.

As club member Catie Guire said, “I just want everyone young and old to be aware of it and to know there is a younger generation that has to deal with these problems and are wanting a solution.”

For materials, the students relied primarily on recycling a diverse array of discarded items. A broken mirror, plastic detergent bottle, wooden bed slats and used tea bags were all pressed into service. Each piece conveys the serious environmental impacts of climate change, or offers hope that it can be slowed or reversed.

Fish Sticks portrays four fish species endangered by rising ocean temperatures. Climate Change Through the Eyes of a Middle Schooler a triptych by Zola Coleman, addresses wildfires, pine beetle damage in forests, and pollution in urban areas. The Plant a Tree assemblage by Jackson Sanders and Marcus McQueen promotes planting trees as part of the solution to reducing CO2 levels in the atmosphere.

Catie Guire’s portrait, School Strike for Climate Change, honors Thunberg’s individual decision to strike, which led to an international movement. Camille Benedict’s Climate Justice Sunflower reflects her understanding of climate change as a social justice issue as well as an environmental one.

While the general public won’t be able to enjoy it in person, Hill Center has created a virtual gallery on their website: www.hillcenterdc.org/artist/young-artists-gallery/ The students are excited to share their work and hope you’ll make a “visit.”  As Camille puts it, “It’s really cool that Hill Center allows us to show our work to the community.”  It is cool. Check it out; you’ll be glad you did.