Gina Eppolito loves to run. Since 1980 she has run in 10ks, triathlons, half marathons and 10 marathons leading to Boston in 2003. She has been dedicated in keeping up her overall fitness as well. I used to regularly chat with her on her way out of the gym after a weightlifting or yoga class.

Recently, Gina has been feeling the cumulative effects of the years she pounded the pavement. “Last January I was talking to my husband about not being able to run anymore,” she said. “My knees were fried. I told him I needed another sport to do. I wanted a sport that was high intensity and I wanted to learn new skills and play with a group.”

She focused on fencing and ice hockey. But fencing classes were all located in the suburbs too far away from Capitol Hill. So ice hockey became her choice. Gina took off her sneakers, put on her blades and headed to Medstar Capitals Iceplex in Arlington to learn to play ice hockey.

Gina first class was sponsored by The Scarlett Caps, a group dedicated to growing and supporting the women’s hockey community in the DMV. It offers a winter and summer season that feature four to six all-female teams. Gina began with skating fundamentals.  “Ice hockey skates are very different from figure skates,” said Gina. “A hockey skate doesn’t have a toe kick. It also has a shorter blade so you can move and maneuver better and faster. It’s a heavier boot than a figure skate–thick nylon with a very stiff plastic hard shell.

“Staying up on hockey skates is very different from figure skating,” she said. But from learning how to stand up she progressed to learning how to go backwards, crossover and do circles skating with pucks.

After that first class Gina was hooked. So were the other five women who were in class with Gina. “We all became friends and signed up for the next class together.”

The next level of instruction – Hockey 1- was co-ed. “We all got through Hockey 1 and graduated to Hockey 2, she explained. “Once past Hockey 2 we were able to wear our hockey gear when we got on the ice where we all learned and practiced specific hockey drills and scrimmaged. We learned to play the game.”

Gina was able to play regularly all through the summer. “The ice is available all year.” Often, after their practice, she and the other skaters would sit in a beach chair in the parking lot at Ballston (six feet apart) and have a tailgate party.

Gina also got her family involved in the sport. In addition to taking class twice a week and playing a Sunday morning game of “Stick and Shoot” she skates with her husband Slake and her twin 11-year-old girls Zaida and Kinley. 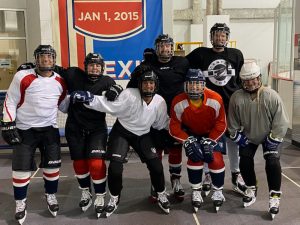 She finds it a perfect way to clear her head. “It’s an endurance sport. It’s challenging. You need to focus and you need to have enough strength and balance to know how to be in control of your body enough to stay on your skates.”

By choosing ice hockey when her knees screamed ”no more running, please!” Gina found a new passion. “I had no idea I would love it as much as I do. I want to eat, drink and sleep this ice. It’s a really fun, exciting activity for me.”

By being flexible and open to change Gina found she could build new friendships and learn something new about herself at a time when everything else seemed so paralyzed to her. “It allowed me the ability to be refreshed with something completely new. This is my medicine. This is my happy place.”

In addition to ice hockey classes, Medstar Capitals Iceplex where the Washington Capitals practice, offers classes in figure skating for skaters from ages 4 to adult.  For more information log onto: www: medstarcapitalsiceplex.com.

Pattie Cinelli is a health and fitness professional and journalist who has been writing her column for more than 20 years. She focuses on non-traditional ways to stay healthy and get well. Please email her with questions or column suggestions at: fitmiss44@aol.com.

Turning 80 in the Pandemic