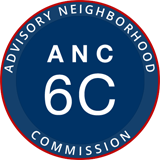 Construction Traffic at Logan School
The construction at the Logan School (641 Third Street NE) has been ongoing for an extended period, however there have been new complaints made by residents involving reports of construction trucks driving through neighborhoods near G Street and other nearby side streets.

Christy Kwan, Transportation and Public Space Committee Chair, emphasized a need for stronger lines of communication about the flow of traffic and expectations in this area noting a “disconnect between the construction managers onsite and the truck drivers” in the construction zone.

Previously, the committee unanimously agreed to draft a letter of concern about these traffic violations by truck drivers and proposed that the ANC send it to Mayor Muriel Bowser (D), Ward six councilmember Charles Allen, the DC Public Schools and the Department of General Services. This motion passed with unanimous support from all commissioners.

Games of Skill
At Thursday’s meeting, the commissioners discussed the game Dragons Ascend and the addition of a third location in the District applying for these games of skill. Proposals for game of skill endorsement have been discussed previously for two locations in ANC 6C jurisdiction; Bar Elena (414 H St NE) and Allure (711 H St NE) and the third will be Union Pub (201 Massachusetts Ave NE). Union Pub as applied for an endorsement and their status will be addressed at future committee meetings.

Steve O’Neal, chair of the Alcohol Beverage and Licencing Committee, spoke about “whether the ANC wants to take a position that we oppose all game of skill endorsements” across the board. O’Neal said a concrete position from the commissioners may be a helpful step forward in this process. Joe McCann, chair of the Environment, Parks and Events committee, spoke in support of the games of skill endorsements.

“I just don’t know if and how it could get unruly or out of hand or what people’s concerns are with it,” McCann said. “It seems relatively innocuous, but I’ll be glad to listen to other people’s reactions.”

Commissioner Kelty (6C05) expressed hesitation about implementing these games of skill and emphasized the importance of providing guidance to the committee.

“I may be in the minority here, but I’m very skeptical about whether this is really such a great idea on H Street,” Kelty said. “I think we have to give (these establishments) a mandate as to what we want them to do.”

The committee plans to meet and continue discussions about these endorsements at the ANC 6C December meeting.

Short-Term Rental Rulemaking
Commissioner Eckenwiler (6C04) discussed recommendations from the committee about proposed changes to short-term rental policies for rentals such as Airbnb in the District.

Eckenwiler expressed confusion about inconsistencies of how property owners can identify their homes; short-term rentals and vacation rentals. For a property to be considered a short-term rental the owner must be present and the property must be their primary residence. For vacation rentals, landlords may rent out a non-primary residence without the requirement of being onsite for up to 90 days per calendar year. The current legislation states that a property owner must select one of these classifications for their property, however in another section, it says that they can select both.

Kelty expressed concern about the legislation calling it “completely unenforceable.”

“The notion that you can get an exemption from the 90 day limit doesn’t make sense to me, if you have to be out of town for more than 90 days, the solution is simple: register as a rental property and rent your property out. I just think that that exemption is ripe for abuse, and I’m sure it will be abused,” Kelty said.

Eckenwiler also discussed the regulations pertaining to parking in both short-term and vacation rentals. Parking is not currently in the rulemaking and the committee recommends including a recommendation to add regulations into the new proposal with the DC council. Kelty expressed disagreement with adding in these regulations citing their unenforceable nature. He said it could cause issues beyond parking into a public disregard other city rules.

“I think the one challenge with throwing in rules that are completely unenforceable is that people are will know they’re enforceable,” Kelty said. “I suspect that it creates a tendency to just disregard all rules, and I know that’s a bigger thing than short term rentals, but something I think we should think about as a community.”

The ANC voted unanimously after discussion and deliberation to send a letter to DCRA regarding their suggestions for the legislation as well as the parking enforcement for both types of rentals.

ANC 6C will meet next on Wednesday, Dec. 9 at 7 p.m. virtually via Webex. Find the link to the meeting, agendas and more information about the commission at www.anc6c.org.