At the Oct. 29 situational update, Mayor Bowser (D) addressed the upcoming Nov. 3 general election, discussed plans for the possibility for demonstrations across the district and addressed the ongoing protests and investigation into Koran Hylton’s death.

In-person early voting in the District will began Tuesday Oct. 27 will continue through election day. Polling places are open from 8:30 a.m. to 7:00 p.m everyday through Election Day. On Nov. 3, additional voting centers across the District will open for a total of 96 polling places across DC. Same day voter registration will also be available at all early voting locations and will be available on election day. Voters can vote at any polling place and can find the one closest to them at dcboe.org.

Bowser also encouraged Washingtonians to “not wait to vote” and to use “the whole week” to avoid long lines seen in other parts of the country at the polling places.

Bowser said the city is collaborating with the MPD to implement parking restrictions downtown that could turn into road closures. Bowser strongly recommended against driving downtown on election day.

“We know that some people would like to cause mayhem or trouble,” Bowser said. “(However) we are preparing to ensure this city’s safety.”

Bowser said while the city has not made requests of the National Guard that they are “on alert” should they be needed.

Mayor Bowser addressed the death of Karon Hylton and said that the released police body camera footage will be used as “part of an investigation that will decide whether or not MPD policies were broken” noting that the footage did not show the officer’s car striking Hylton. Bowser said she was “extremely devastated” by Hylton’s death.

Bowser identified the driver of the vehicle with the camera footage previously released as Terrance Sutton.

“Whenever a member of the District of Columbia loses a family member on the streets, we all feel bad,” Newsham said.

Newsham also addressed the protesting situation for the past several days in the District saying that there was a combination of peaceful and disruptive protests. Newsham reported that five  MPD members were injured and reported several instances of property damage across the city.

“We will do everything we possibly can (with) this investigation to ensure that it is completed thoroughly and carefully so that the family is sure that we are being transparent,” Newsham said.

Sarah Payne is a History and Neuroscience student at The University of Michigan interning with HillRag. She writes for and serves as an assistant news editor for Michigan’s student newspaper, The Michigan Daily. You can reach her at [email protected] 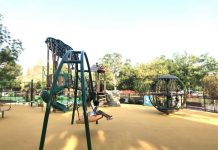