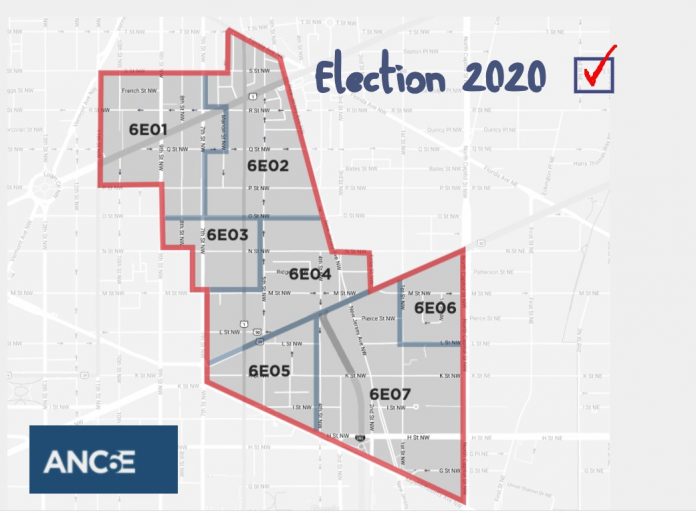 Hill Rag requested statements from known candidates. Below are those responses received for candidates for ANC 6E. If you are a candidate to represent an ANC 6E SMD and want your statement included, please email SarahP@HillRag.com

Michael Eichler (6E01) is an urban planner, transportation engineer, and environmentalist with 14 years of experience in urban and transportation planning and policy work in the DC region. He is the only candidate on the ballot to represent 6E01 after Alexander Padro stepped down to run for DC Council. As an Earth-first environmentalist, Eichler is dedicated to helping our city reduce its carbon footprint through sustainable transportation and compact, affordable housing near high-quality transit. He believes the key to solving complex social problems is empathy, starting with presuming everyone is doing the best they can with the tools they have and finding ways to provide better tools. Eichler is a creative problem-solver, confident in my belief that developing a shared vision of a sustainable future is the only way to make even the most incremental progress. Eichler believes that engagement is the key to developing that shared vision, and he looks forward to exploring new strategies to help people be heard and feel heard.  You can read more about Eichler and his platform on his website eichler4dc.com.

Tony Brown (6E02) has been a DC resident for more than 60 years, living, working and raising his family here. After moving to Shaw twelve years ago, Brown began attending ANC meetings and quickly engaged with issues concerning safety, development, sanitation and crime. Through his active involvement, he served on the Zoning Committee and the Alcoholic Beverage Control Committee. When former ANC6E02 Commissioner Kevin Chapple decided to not seek re-election, he and others in the community collectively pursued Brown for the positon and he served as a commissioner from 2017-2018. Having served, Brown continues his active engagement and is still sought out by neighbors to address ongoing ANC issues. Brown is focused on maintaining safe, clean and family-friendly neighborhoods, supporting safe travel initiatives, supporting the public school efforts to retained in-neighborhood services for our growing youth population and collaborating with police department to insure safe streets.

Alex Lopez (6E02) is the chair of the ANC Transportation Advisory Committee and is seeking election to the ANC this Nov. In October 2018, Lopez was hit by a car at Fifth and Rhode Island NW and, frustrated with a lack of action from our ANC to fight for safer streets, convinced ANC 6E to let him launch a Transportation Committee. For the past two years, Lopez has worked to enable the ANC to proactively address transportation issues in our neighborhood and improve ANC responsiveness to constituent concerns. Lopez has also addressed several other traffic safety issues as the chair of the committee during his tenure in ANC. If elected, Lopez plans to continue to work diligently on transportation and road safety in addition to making ReOpen DC more equitable and in championing community safety through alternatives to policing. Lopez’s most important qualifications for ANC Commissioner are that he is accessible, knowledgeable, responsive, and (above all) he listens.

The Hill Rag did not receive a statement from Valerie Randolph, on the ballot to represent ANC 6E02.

The Hill Rag did not receive a statement from incumbent Frank S. Wiggins, again on the ballot to represent ANC 6E03.

Jordan Hibbs (6E04) describes herself as a problem solver with a “get-it-done” attitude. Hibbs grew up in poverty and witnessed domestic abuse in her childhood home. She lived in government-subsidized housing with a single parent and was depended on food stamps and searched dumpsters for clothing and supplies. It was a tough time, she said, but she learned a great deal from her mother who had to raised Hibbs and her siblings as a single parent. With the support of friends, family, and teachers, Hibbs found a great amount of support throughout her journey. Through working a full-time job, earning scholarships, and getting financial aid Hibbs was able to attend community college, then university, and then graduate school. Hibbs has committed her life to public service in our nation’s capital, and is fighting for improving housing affordability and public spaces, supporting jobs and small businesse, creating community-focused public safety, enhancing road safety and modernizing infrastructure. You can learn more about Hibbs and her platform on her website  VoteJordanHibbs.com.

Rachelle Nigro (6E04) is an incumbent who looks forward to continuing to serve as a positive force bringing our community together and liaising effectively, with the Department of Public Works (DPW), the District Department of Transportation (DDOT), the Metropolitan Police Department (MPD), the Department of Consumer and Regulatory Affairs (DCRA) and other DC Government agencies. Nigro’s goal is to help constituents when they are having trouble resolving issues with these agencies. Her long-established relationships with the staff and the Directors of many of the agencies benefit constituents and their daily lives in 6E04 by resolving problems with parking, rat infestations, illegal construction, or other issues. Nigro is proud of her ability to respond quickly and work effectively to help resolve resident concerns with all agencies. Nigro is committed to bringing valuable and timely information directly to all constituents and has used all forms of communication, including flyers, phone, text, e-mail, and social media to provide up-to-date information on government issues and neighborhood happenings. You can learn more about Nigro and her platform at facebook.com/votenigro.

Patrick Parlej (6E05) is running primarily as a neighborhood advocate. The core issues of his campaign are the environment, affordable housing, and DC statehood.

Parlej believes that while it is important to have development, it is also important to consider the ways that development affects broader neighborhood issues. He plans to fight to ensure that businesses operating in our neighborhood are incorporating green, sustainable practices and that they are doing their part to make affordable housing available to people in our community.

Parlej’s goal is to build a strong relationship between the community and the ANC to ensure that our neighborhood’s voice is represented. To learn more about Parlej and his platform, visit his website at PatrickForANC.com.

The Hill Rag did not receive a statment from candidate Denise Blackson (6E06).

Incumbent Kevin Rogers (6E07) and challenger Nate Brown (6E07) did not respond to HillRag’s request for comment in time for publication.

Read candidate statements in other ANCs: ANC 6A, ANC 6B, ANC 6C, and ANC 6D

Norton to Host Meeting on Impact of Capitol Security on Residents