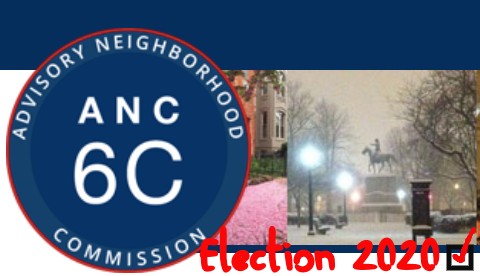 Hill Rag requested statements from known candidates. Below are those responses received for candidates for ANC 6C. If you are a candidate to represent an ANC 6C SMD and want your statement included, please email SarahP@HillRag.com

The area covered by ANC 6C includes Stanton Park and Union Station, reaching north to New York and Florida Avenues NE. While no race is contested on the ballot, Pranav Nanda is running as a write-in candidate to challenge incumbent Mark Eckenwiler in 6C03.

Christine Healey (6C01) has lived in Washington, D.C., for over thirty-six years.  She and her husband raised two sons in Ward 6. After almost 29 years as a professional staffer and counsel in Congressional offices, Healey became involved with local government through membership on two ANC 6C committees.  In addition to being a commissioner, Healey is the ANC 6C Secretary and responsible for keeping the 6C website up-to-date. Healey has served as an ANC commissioner for two terms and is running to continue addressing her priorities. Healey plans to focus on representing the concerns of the neighborhood with District and federal officials, including those concerns related to recovering from the pandemic, pushing for improvements in the proposed massive Union Station Expansion Project, advocating for transportation safety, especially for pedestrians and bicyclists and seeking to preserve residential properties for residential purposes.

Karen Wirt (6C02)  has served as Chair since 2006. First elected in 1994, Wirt has served continuously throughout, aside from a two-year break to allow another commissioner to run for election. She has represented three SMDs: 6A03, 6C08 and now, 6C02. While the ANC boundaries may have changed, Wirt has remained constant: she has lived at the same address since 1978. Over the past 22 years, Wirt has provided oversight regarding the air rights over Union Station and helped to shut down a grocery store at the intersection of Fourth and F Streets NE that was known to be selling liquor and cigarettes to minors. WIrt said that it is always a challenge to get the attention of the District Government agencies and to work with them to respond to concerns voiced by the commission. Still, these are part of her consistent goals for the commission. Wirt is clear that the members of the community and the constant growth of the neighborhood are what has kept her coming back to the challenging role of ANC Chair.

The Hill Rag did not receive a candidate statement from incumbent Jay Adelstein, who is seeking re-election to represent constituents in SMD 6C03.

reelection to the position. Over the past several years, Eckenwiler has worked to get alleys repaved after years of inaction, answered residents’ questions about tree boxes, parking rules, getting utility poles relocated, negotiated agreements with liquor-license applicants to ensure the neighborhood’s peace and quiet while supporting local businesses’ ability to thrive and worked for safety improvements in the transportation system. Eckenwiler has seen firsthand how poorly District agencies serve residents and has spent countless hours addressing systemic dysfunction in DC government. As a result, Eckenwiler is known and respected by agency officials across the District, and he plans to use those contacts to make government work better for the community.

This year, DC faced many significant challenges and many underlying issues facing our community have been illuminated. Pranav Nanda said he is running as a Write-In Candidate for ANC 6C04 because he wants to make sure that as the District recovers and addresses these challenges the voices of all neighbors are heard; to make sure those values are reflected in decisions impacting our community; and because he believes going “back to normal” is not good enough –that we must strive to make DC a more just and equitable community for all. As a member of Moms Demand Action, Nanda has advocated for a #VisionZero that invests in evidenced-based community-solutions to address the rising rates of violence in DC. As a member of the DC Education Coalition For Change, he called for investment in our neighborhood schools, more mental health support for students, and initiatives to close the digital divide. As a lead organizer with the Ward-6 Mutual Aid Network, Nanda helped support unhoused neighbors and families throughout COVID-19 and led the DC Back to School Bash which provided 400 students with a digital device to engage in distance learning. To learn more, visit www.pranavnanda6c04.com or follow him on Twitter at @PranavNandaDC.

Joel Kelty (6C05) is an architect and real estate professional with an interest in affordable housing seeking reelection to the commission. Kelty has lived in ANC 6C since May 2000 and has served on the Planning, Zoning and Economic Development Committee for many years, reviewing requests for ANC support on projects involving zoning relief and historic preservation. If re-elected, Kelty looks forward to engaging with the community on issues that are important including enforcing rules related to illegal construction, improving transportation infrastructure and function, preserving and improving public space, improving public education and strengthening government accountability. Kelty also hopes to work with residents, nonprofits and DC agencies on developing compassionate, workable solutions to eliminating homeless encampments on public space in our ANC and eventually eliminating homelessness in DC altogether.

Drew Courtney (6C06) is a former chair of the ANC 6C Alcoholic Beverage Licensing (ABL) Committee. Since taking the 6C06 seat in June, 2019, he has been learning the ropes of his office while working to make his SMD safer, stronger and more equitable. He has focused on issues around the encampments under the overpass on the 100 blocks of K, L and M Streets NE; emphasized the need for increased affordable housing; and advocated on issues around the Union Station redesign, to name a few. Courtney has a background in progressive advocacy and lives near Fifth and M Streets NE with his husband and their dog, Renley.

Read candidate statements in other ANCs: ANC 6A, ANC 6B and ANC 6D

An earlier version of this stoy mis-spelled Mark Eckenwiler’s last name as “Eckenweiler”. The Hill Rag apologizes for this error.