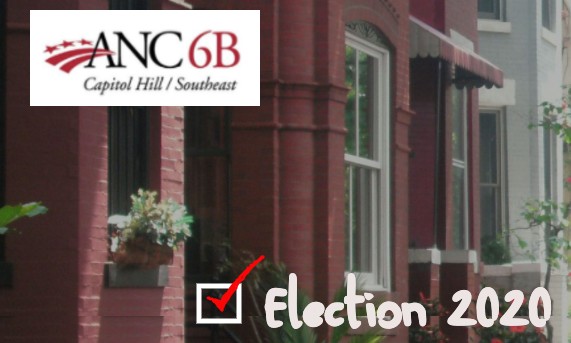 ANC 6B covers the area south of Lincoln Park, roughly from South Capitol and Interstate 395 to the west and RFK Campus to the east. Four races are contested. In ANC 6B03, a candidate has stepped up to challenge incumbent Brian Ready. Write-in candidates vie to represent SMD 6B07, which the current commissioner, Kelly Waud will not seek again in 2020. In 6B08, two candidates vie for the seat vacated by Chander Jayaraman to enter the race for At-Large Council; and in 6B09, two candidates which was vacated by Kasie Clark in March 2020.

Hill Rag requested statements from known candidates. Below are those responses received for candidates for ANC 6B. If you are a candidate to represent an ANC 6B SMD and want your statement included, please email SarahP@HillRag.com

The Hill Rag did not receive a candidate statement from incumbent Commissioner Jennifer Samolyk, who is running unopposed on the ballot to represent constituents in 6B01. Samolyk took office in 2014. She has worked to help residents combat rat infestations in their neighborhoods, to fight an increasing number of ‘party houses’ in her SMD, and to give brick and mortar businesses a fair chance to survive.

The Hill Rag did not receive a candidate statement from Commissioner Gerald Sroufe, who is running unopposed on the ballot to represent consituents in 6B02. Sroufe has a background in education and has owned a home on the Hill since the 1960s. He was an active community voice throughout the Hine redevelopment project and currently serves as the ANC representative to the Eastern Market Community Advisory Committee (EMCAC).

Incumbent Brian Ready (6B03) is the current Chair of ANC 6B and a former co-chair of the Working Group on Barracks Row, working to strenghten the businesses on Eighth Street SE and help them survive the pandemic. Ready has a background in hospitality and law and in volunteering at The Townhomes on Capitol Hill. He said he is passionate about promoting affordable housing, ensuring that the neighborhood is safe, and strengthening the diversity of the community. Ready said he advocates to work through bureaucracy and to strengthen ties between neighbors and government. He wants to improve community safety by working with First District Police, the Mayor’s Office of Community Engagement and with neighbors. He will keep neighbors informed by going door-to-door and holding community office hours. Follow him on Twitter at @Ready_4_DC.

Gerardo Mijares (6B03) is an attorney specializing in financial distress and plans to bring his insight to help the community as we continue to navigate the “next” normal if elected this Nov. Mijares is running to represent 6B03 because he wants to increase awareness of resources and programming that are available to neighbors as residents of Capitol Hill. He said his goals are to bolster the ANC 6B website to help neighbors better understand how to take advantage of resources offered by the city, commission, and organizations that our commission supports to improve their day to day lives during these difficult times. He also plans to be an invested and active voice with respect to neighbors’ concerns. Regardless of whether he is elected, Mijares plans to be an advocate and champion for executing the goals set forth above, especially the establishment of clearer channels of communication between neighbors and the commission.

The Hill Rag did not receive a candidate statement from 6B04 incumbent Kirsten Oldenburg, who is uncontested on the ballot. Oldenburg has served ANC 6B since 2007, including several stints as Chair. She has worked on many projects in the area, notably the Virginia Avenue Park project and the ongoing Barney Circle redesign. She is currently the Chair of the ANC 6B Transportation Committee. Learn more about her by visiting her website: www.kirsten6b.org

Incumbent Steve Holtzman took the oath to serve constituents of 6B05 in January, 2019. As Holtzman campaigned, he went to every door and spoke with many neighbors and vowed to learn how to best serve constituents and how to find sustainable, lasting ways for all to work together. He has an active email list through which he transmits information relevant to consituents and seeks input as well as alerting them to matters under consideration by the ANC. Holtzman serves as the Chair of the Livable Communities Task Force (LCTF) which, among other issues, has followed the renovation of the Eastern Market Metro Plaza (EMMP) Park, working to ensure that resident views are considered and to hold District agencies accountable.

Corey Holman (6B06) is focused on assisting community members with District agencies, serving the community with actionable improvements and issuing resolutions reflecting our community’s values as he seeks reelection to the position. Over the course of the past two years, Holman has worked to ensure District agencies are responsive to your concerns big and small. Holman has also focused on implementable improvements for our community through official ANC action and lobbying the Council. In the past two years, he has have been able to secure funding for rebuilding the intersection of Pennsylvania and Potomac Avenue, advocate and lead ANC Support for bus and bike lanes to Pennsylvania Avenue SE, work to require 36 more affordable housing units than required for a planned residential project and allow more housing on alleys. To learn more about Holman and his platform, visit his website www.coreyholman.com/platform.

Although no candidate registered in time to appear on the ballot, three people have indicated their interest as write-in candidates to represent 6B07, which will be vacated by incumbent Kelly Waud at the end of the year. Edward Ryder, David Reinersmann, and Misha Pettway are in all in the race for the seat. The links follow interviews with Maria Helena Carey of The Hill is Home, which embarked upon thorough interviews with candidates in the 2020 local elections earlier this year.

Peter Wright (6B08) is an attorney and enjoys working to better his local community and help local residents. As an attorney, Wright represents people facing difficult circumstances, and his work puts him on the front lines of residents’ interactions with District laws and allows him to understand how policies impact our community. Wright wants to be the voice of the community and fight to ensure that the diverse history of this area is protected and that the continued development serves to enhance the lives of community members. Wright plans to address these issues  through fiercely advocating for the concerns and interests of 6B08 in discussing and advising on different issues. Wright is excited about the prospect of putting my passions and skills to work in service of this community and will work hard to serve the interests of its residents.

Alison Horn (6B09) has spent her career serving the DC community at the Public Defender Service, and at local nonprofits Free Minds Book Club and Civil Rights Corps. Advocating for her clients and helping them navigate the bureaucracy of DC’s agencies has required Horn to be organized and hard-working, to be a good listener, and to be in community with a wide array of diverse DC residents. Horn is excited to bring these strengths to the role as ANC, and to be a strong advocate for my neighbors. To me, the most important role of an ANC is to listen to neighbors, keep them informed, and advocate for their needs when making decisions impacting their daily lives. I am inspired by and I share my neighbors’ progressive values on issues like racial and economic justice, environmental conservation and public safety. Horn loves living in this neighborhood because residents of SMD6B09 care about being kind to our neighbors, creating sustainable and inclusive communities, and creating a vision for public safety that uplifts and empowers our neighbors rather than oppressing them. Horn shares these values, and I would hope to fight for them as ANC. You can learn more about Horn and her platform at www.alisonforANC.com.

1998. Speaks is a United States Army Veteran and has volunteered as a Court Appointed Special Advocate for Abused and Battered Children (CASA) and I am an active member in my church,  Metropolitan African Methodist Episcopal Church (AME). My loving parents taught me at a young age to always be of service to the people you meet through this life’s journey and that is how I live my life today. Speaks has been an active Hill East Task Force participant for many years advocating for my neighbors to ensure that our government addresses our quality of life issue(s) as it relates to the development of Reservation 13,  the increase in neighborhood crime, pedestrian and bicycle safety, vehicles speeding in and around our neighborhood, RFK Stadium and Senior Citizen Housing that will allow our Elders to safely age in place. As a neighborhood activist Speaks have worked with multiple DC Agencies such as Metropolitan Police Department (MPD) Cmdr. Kane and 1d Patrol Services to ensure pedestrian/bicycle safety at our intersections and residential streets are enforced and increasing patrols in areas where there has been a spike in violent crimes. Speaks has also worked with the Department of Public Works to enforce our Zone 6 parking privileges especially for our senior citizens who often return home from their health care visits in the afternoon only to find no available parking in their block.

Incumbent Kathryn Denise Rucker Krepp (6B10) and her family have lived in the Hilleast neighborhood since 2003. She is seeking her fourth term as ANC Commissioner. Over the past six years, Krepp has hosted numerous community meetings regarding Reservation 13. The goal of past and future meetings is to ensure that neighbor’s concerns are addressed and their recommendations incorporated during the construction and deconstruction phases. Krepp worked with DDOT to install traffic calming bollards to slow down drivers and make Hilleast streets safer for residents. Krepp has also advocated for greater transparency regarding how DC agencies address sexual harassment and assault in DC schools and on DC agency property.  Krepp notes that prior to her advocacy, DC schools were not releasing information on sexual assaults and DC agencies were not tracking sexual assault and harassment settlements and judgements involving DC agency employees.