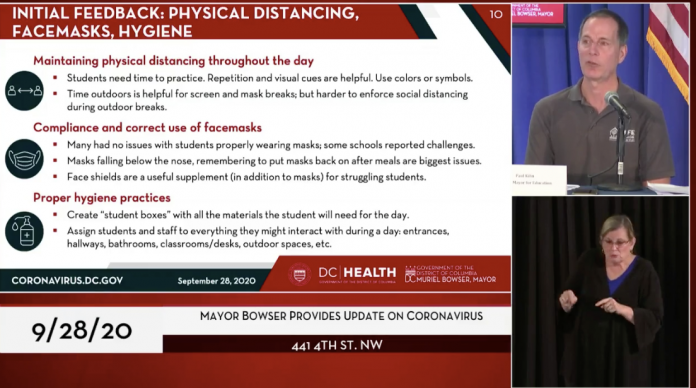 District of Columbia Public Schools (DCPS) will make the first move toward reopening this week as Ballou STAY opened Monday for cosmetology and barbering students.

Various other elementary and middle schools will continue a phased reopening throughout the month of October. In Ward 6, those include Eastern High School, Ludlow-Taylor Elementary and Tyler Elementary.

The schools are opening for Student Support Centers, which provide services related to academics, attendence and student health, as well as Career and Technical Education (CTE), or vacational, programming. Both are created for small groups and vary school-to-school, officials said.

DCPS Chancellor Lewis Ferebee said at a news conference Monday that the centers will serve about anywhere from 20 to 50 students a day, adding that the overall program could be anywhere between 20 to 100 students.

The chancellor said that staff had volunteered to provide in-person services to students, adding that DCPS had worked with the Washington Teacher’s Union (WTU) in staffing the centers.

Ferebee announced the reopenings at Mayor Muriel Bowser’s Sept. 28th Situational Update. He said the process of safety evaluations will continue throughout the year.

“We continue to evaluate and prioritize the conditions for in-person learning throughout elementary schools, knowing that our earliest learners have been prioritized for academic and social emotional support,” Ferebee said.

Ferebee also announced that student services including social and emotional learning, academic support, physical education and arts will be available to students throughout the District.

Christopher Geldart, Director of the Department of Public Works (DPW) said the agency was addressing school maintenance before students return to campus.

“We are working on all the work orders, not just the HVAC, but all the other things that we have in the facilities as well so that our schools are ready when we’re ready to bring students back,” Geldart said.

Deputy Mayor for Education (DME) Paul Kihn spoke about the research that has been done in the District pertaining to schools. Kihn said he consulted with about 18 schools that have already opened for in-person learning on some level, including some private and some public charter schools, hoping to learn from their experiences.

“We did talk extensively about the work with teachers in terms of ensuring that teachers felt confident being back in the buildings and the buildings were safe,” Kihn said. Kihn said that teachers reported feeling safer when the leadership of the schools responded to feedback that they had to offer, and if they could take their students outdoors for breaks.

“What became clear to schools was that over time, teachers’ anxiety really lessened once they were back in the buildings with students and following the protocols and seeing that everything worked,” Kihn said.

Kihn also emphasized that DME received positive feedback regarding students’ abilities to wear a mask for extended periods during the day.

“It turned out that most schools suggested that students had no problem whatsoever wearing the masks,” Kihn said, noting that students did have to be reminded to put masks on after eating and to cover their noses, what the DME called “common challenges”.

Mayor Muriel Bowser will continue to provide updates about the status of District schools.

Sarah Payne is a History and Neuroscience student at The University of Michigan interning with HillRag. She writes for and serves as an assistant news editor for Michigan’s student newspaper, The Michigan Daily. You can reach her at [email protected]