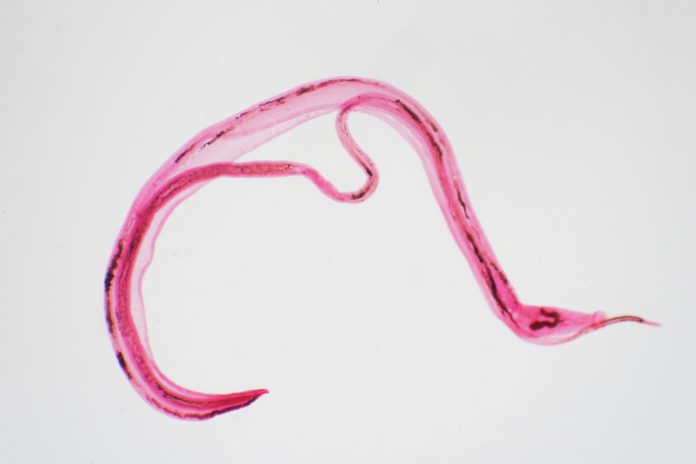 With the dramatic recent influx of puppies and rescue dogs, we have observed a marked increase in incidences of hookworm, an intestinal parasite. Most people are familiar with roundworms, a spaghetti-like worm common in puppies. While roundworms are undeniably gross, they usually do not lead to severe illness, whereas hookworms can be more insidious and problematic.

You can’t see hookworms, well, usually not, as they are a parasite that lives within the small intestine. They are thread-like in appearance, with a prominent hook at one end, albeit they are so small as to be nearly invisible. Hookworm infection, called ancylostomiasis, can be in dogs, cats, and even humans. Several species can infect dogs, but the most common is Ancylostoma caninum. A less common hookworm is Ancylostoma braziliense, which can infect people, too.

The first sign of hookworm infection is usually diarrhea. Diarrhea from hookworms can be so severe in young animals that it leads to severe dehydration and even death. The parasite attaches to the intestinal wall with six sharp teeth, feeding on the blood in the intestines. They can suck so much blood as to cause death via severe anemia.

Adult worms are about 1-2 centimeters in length and are very thin. They use their hook to stay right where they want to be: attached to the intestine. There they live and mate, producing up to 6000 eggs per day. These eggs are passed out to the environment in the feces. Once in the outside world, they hatch and can become infective within two to nine days, depending upon temperature and humidity.

Hookworms are transmitted between animals through several methods. The first is the easiest: an animal eats infective larvae from the environment. the larvae either travel to the intestines or can burrow into the gums, eventually winding up in the lungs. Second, eating infected meat can spread the parasite. Cockroaches can carry hookworms, but ingestion of cockroaches usually does not lead to clinical disease. Still, don’t let your pet eat roaches. Infective larvae, especially of A. braziliense can penetrate the skin directly, leading to itching of the area. The larvae then migrate to the lungs where they are eventually coughed up and swallowed, repeating the cycle. Last and most common, larvae are spread directly from mother dogs to puppies via milk. This is only seen in A. caninum and explains the high prevalence of the parasite in puppies.

Within the intestines, the hookworms secrete enzymes, anticoagulants, and platelet inhibitors, leading to bloody diarrhea and damage of the fine structures of the intestine. This inhibits the ability of the intestines to adequately absorb nutrients, leading to further diarrhea and weight loss. If they deplete one site in the intestine, the hookworms can move elsewhere, creating new damage. For the larvae that enter the lungs, they can cause respiratory signs, including coughing. For a parasite, they can be remarkably long-lived up to two years, allowing plenty of damage over time.

Many dogs with hookworm will be perfectly normal, not showing any clinical signs. These silent shedders spread the parasite undetected. Diagnosis of hookworm is made through examination of the stool, observing for either eggs or via chemical analysis for proteins excreted by hookworms. Many veterinary hospitals (such as District Vet) use both methods. A positive test indicates the presence of the parasite.

Hookworms are amongst the most common intestinal parasite in dogs and cats, with approximately 20% of shelter dogs testing positive. Personal experience has shown this number to be higher in dogs from certain geographic areas. The parasite is not limited to shelter areas; it can be obtained right here on the streets and parks of DC.

Treatment of hookworms used to be straightforward: routine heartworm preventives are labeled for use in preventing hookworm infection. But we have observed that many dogs do not respond to solo use of oral preventives. For treatment we usually still use preventives but add on a round or two of another dewormer, such as Panacur. One injectable heartworm preventive is labeled to treat hookworms and we have observed a favorable response when utilizing it for this purpose. ProHeart12 is given as a once-yearly injection, preventing heartworm for 12 months and treating current hookworm infections. Killing off hookworms requires eliminating the adults, but there are juveniles within the intestines which are not killed by one-time treatments. The injectable version kills the adults for a sustained period of time, not just once. This is why we also use Panacur for a long period of time.

We highly recommend using either ProHeart12 or once monthly preventives. Puppies should also have at least two fecal examinations performed during their puppy visits and adults should be screened at least every year. Also please pick up your pet’s feces quickly in order to lessen environmental contamination.

People can get hookworm, usually via coming into contact with infected soil. Most often the infection is seen in children as they tend to be playing in sandboxes or on the ground. Usually human infections are limited to skin rashes, but if suspected, it is important to contact a human physician. Human cases are most frequently seen in the southeast and Gulf Coast states.

Help that Can Change Your Perspective: Happiness Coaching