A DC Water employee died of a self-inflicted gunshot Tuesday afternoon outside the DC Water Headquarters at 125 O St. SE, according to police reports.

Police found the man in an adjoining parking lot suffering from a self-inflicted gunshot to the head. DC Fire Emergency Medical Services (DC FEMS) responded to the scene and and the man was declared dead on the scene.

In a statement issued Tuesday afternoon, DC Water characterized the incident as a suicide. “This afternoon a DC Water employee took his own life outside the authority headquarters building at 1385 Canal Street SE,” read the statement. “We extend our condolences to the employee’s family and ask that the public respect their privacy during this difficult time.”

DC Water said that there were no other injuries associated with the event and water services were uninterrupted. Counselling services are being offered to the other affected employees.

The area was closed for approximately four hours to allow for the investigation. 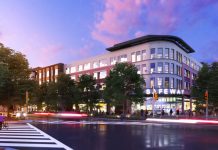 Successes and Challenges in Distance Learning