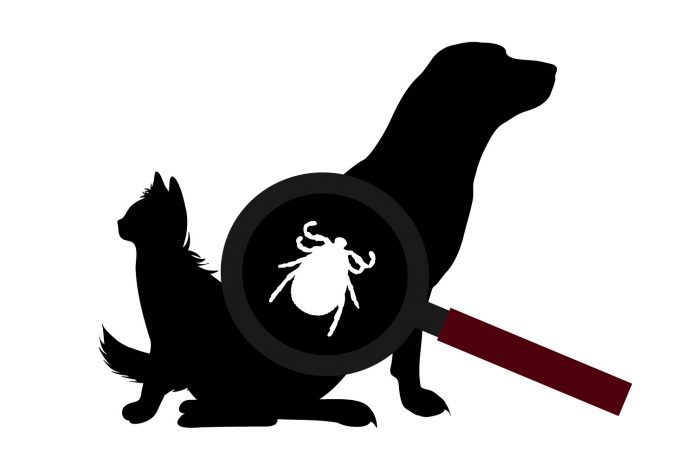 A dreamy winter of warmth and little snow has a sinister side-effect: summer ticks and Lyme disease. The lack of cold allows for a boom in mice and the ticks they carry, therefore leading to an outbreak in tick-borne diseases, especially Lyme.

Lyme disease is caused by an infection with Borrelia burgdorferi, a corkscrew-shaped spirochete bacteria. The bacteria is carried by Ixodes ticks, which are small, hard-shelled organisms. Although they have eight legs, ticks are not spiders and live a completely different life cycle. Ticks which carry Lyme range in size from a pinhead to about 4 millimeters and all stages of a tick’s life can carry and transmit Lyme. Ticks lay eggs in the spring and summer and the eggs hatch into nymphs, which feed on small and large mammals, which then can become infected with Lyme. The nymphs over-winter, transforming to adults the next year, repeating the cycle.

When an infected tick bites a dog (or human), they inject saliva, causing irritation, increased blood flow, and a rash. The Borrelia bacteria enter through the saliva and begin to multiply in the skin, then migrating to joints, connective tissue, and the central nervous system. Over 90% of dogs who are infected with Lyme disease are asymptomatic, showing no indications of the disease.

Clinical signs usually show up within two to five months of infection and may include fever, joint swelling, difficulty walking, swollen lymph nodes, and lethargy. Lameness may start in one leg and then shift to other limbs. The typical bull’s eye lesion seen sometimes on the skin of people is rarely observed in dogs, although there is usually some irritation at the tick-bite site. Less common, but more serious, is the development of kidney failure secondary to Lyme. The exact mechanism which causes kidney disease is unknown, but it is thought that the immune system manufactures immune complex molecules, which damage or accumulate in the kidneys, leading to progressive kidney failure. This can occur in approximately one to two percent of Lyme cases.

Lyme disease can be readily detected with routine. blood testing. Most annual heart worm tests also screen for Lyme disease. The test does not indicate if the dog has clinical Lyme disease, it only shows exposure. Many dogs will get Lyme, but their immune systems will clear the organism, with either no or minimal clinical signs. When a dog tests positive on the screening, the veterinarian may run an additional test to see if the Lyme disease is active and needing treatment.

Should the secondary testing indicate treatment, either doxycycline, an oral antibiotic, or cefovecin, an injectable antibiotic, may be used. Treatment is given for a full month, with retesting six months post treatment. If there is kidney disease, much more intense treatment is indicated, with many dogs not recovering. In other cases, your veterinarian may choose to treat for Lyme without running confirmatory tests.

Improvement in lameness and lethargy are usually noted within 24-48 hours of beginning antibiotic therapy. It is thought that Lyme, even if treated, may have long-lasting effects in regards to lameness and kidney disease.

Preventing Lyme is several-fold. The first is using a flea/tick preventive such as Simparica, NexGard, Seresto, and others. These will not prevent ticks from attaching to your dog, but are intended to kill ticks before they are able to transmit the bacteria from the tick into the dog. if you note any ticks on your dog, remove them as soon as possible. A vaccine is also commonly used, especially in dogs who are active and visit the woods, tall grasses, the beach, and other park-like settings.

Lyme disease can be debilitating, even fatal to dogs. Prevention is key, as is early treatment.

Dr. Teich is the medical director for District Veterinary Hospitals in Eastern Market and Brookland.  Visit www.districtvet.com for more information.