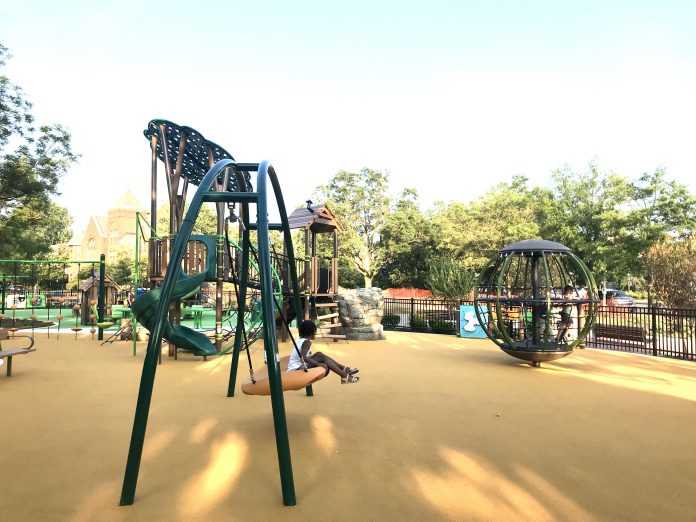 The announcement was made the day before fences came down. Families were spotted inside the unlocked playground the evening of Thursday, July 3. DGS did not respond to requests for comment on the official opening date.

As a result of COVID-19-related construction delays, shade structures on the playground will be installed in late summer. Work on water line connections under Ninth Street SE will be completed in phases to avoid a complete road shutdown.

Martinez said the greenspace can accommodate a variety of activities.

“It’s a pretty large space for outdoor picnics, gatherings, and kids and community members to run around,” he said.

Construction of phase 2 of the park, on the parcel that contains the Eastern Market Metro Station entrance, is scheduled to begin in fall 2020 and go through spring 2021.

Phase 2 includes the area around the Metro entrance and exit, two medians, and greenspace along the northwest and southeast areas of the park. Located near the Metro stop, a pavilion with LED strip lighting and outlets is included in the design. Some residents were concerned about the noise level performances at the pavilion may generate.

“I know people who actually live in the neighborhood, and they’re so fed up with the amplified noise from players,” one resident said. “I can’t imagine they’d be real happy with us.”

Tara Swersie, who lives on D Street, said she hears the noise but supports building the pavilion. She said residents can ensure the noise does not become “egregious” without abandoning the design.

“It has been on the table for quite some time,” Swersie said. “There are some positive attributes to the pavilion, so we are supportive of it.”

Another area of concern is slip lane closures planned during construction. 6B05 Commissioner Steve Holtzman said the ANC has supported closing slip lanes, which according to a study commissioned by DDOT last year would “reduce the number of pedestrian crossings from the north side to the south side of the park,” according to a 2019 traffic impact study. Some residents raised concerns about the closure’s impact on speeding, pedestrian safety and traffic build-up.

Residents were also concerned about the relocation of a lay-by. According to Martinez, DDOT representatives said the Pennsylvania Avenue lay-by cannot remain and DDOT representatives “were open” to moving it to Eighth Street. Several residents at the meeting suggested eliminating the lay-by, saying it may interfere with the positioning of Metro bus stops.

Martinez said DGS is advancing with traffic elements as voted by the ANC this January. This includes the decision not to reverse traffic at the 700 and 800 blocks of D Street SE, as well as the construction of a tabletop crossing at 7th Street SE between SE Library and the area near the Metro stop.

Holtzman said the ANC6B LGTF is in support of the project moving forward. Recommendations to the Public Space Committee include the ANC’s “informal consensus” on removing the lay-by on Pennsylvania Avenue as well as creating a process for neighbors to participate in discussions about the pavilion and noise levels.

The Public Space Committee hearing is scheduled for Thursday, July 23. Email PublicSpace.Committee@dc.gov or call (202) 442-4960 with any questions. More information about past meetings, including agendas and status reports, is available here. Learn more about Eastern Market Metro Park here.

Eva Herscowitz is a journalism student at Northwestern University currently interning with the Hill Rag. She writes for Northwestern’s student newspaper, The Daily Northwestern. You can reach her at eva@hillrag.com

One Man Shot, Another Stabbed on H Street