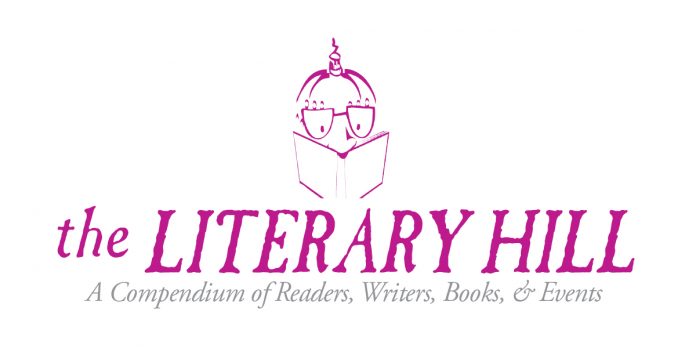 On Sunday, May 3 we held the first-ever VIRTUAL Literary Hill BookFest! From 11 a.m. to 1 p.m., we presented live discussions with your favorite local authors and video readings of poetry, fiction, history, and children’s stories on our website at www.literaryhillbookfest.org. Hundreds of people joined in the celebration of Capitol Hill words!

You can still watch video of the readings and the discussion at the website.

Duke of the Hill
Who wouldn’t love a dog like Duke? Sadly, somebody didn’t. At one time, he was “a nameless puppy who wasn’t treated very well,” lying in the dirt wondering when he’d get his next meal… or even a drink of water. He longed for “a home with a family that would take of me and that I could take care of.”

It’s not giving anything away to reveal that Duke gets his wish. It’s right there in the subtitle of a delightful picture book by Allison McGill: “The Adventures of Duke, the Therapy Dog: Duke Finds a Home.” The sweet (and true!) story of how he’s rescued and finds his loving family is simply and movingly told by McGill, and the illustrations by John Paul Snead provide a heartwarming accompaniment. Rendered in soft pastels, they capture the eager couple who adopted the dog as well as the many moods of Duke himself, from his dejected beginnings to his contented end, asleep and dreaming of bones with his tongue hanging out.

“The Adventures of Duke, the Therapy Dog” is not only a charming book to read to children but it also helps support dogs like Duke, with 20 percent of its profits going to the Atlanta Boxer Rescue.

Allison McGill is the founder of Lola & Pear Publishing (www.lolaandpear.com). Her hilarious second book, “Mommy Didn’t Say That…,” co-written with Charla Everhart and illustrated once again by John Paul Snead, will be coming out this spring. She has also been busy organizing volunteers to go grocery shopping and run errands for our at-risk neighbors during the Covid-19 crisis. If you want to help, email her at [email protected]

On the Trail of the Takhi
“Hello, Emergency Service for the Rescue of Endangered Species,” announces Stowe. With her cousin Wheaton listening in on speakerphone, she hears the director of a wildlife preservation project in Mongolian asking for their help. It seems a harem of endangered horses known as takhi has strayed out of the national park where they are part of a breeding and reintroduction program. If they’re not found, it would mean that their valuable genes could be lost forever. Sounds like a job for ResQ!

“ResQ Takes on the Takhi” is the second in a series of novels for middle schoolers by Eva J. Pell that follows the adventures of pre-teens Stowe and Wheaton and their grandmother, wildlife photographer Ariella. Together they form ResQ, an organization committed to saving animals being threatened with extinction. The first book, “ResQ and the Baby Orangutan,” found the trio in the jungles of Borneo, battling illegal loggers and animal traffickers in pursuit of baby Buddy, who got lost after his mother was shot.

This time around, the rescuers contend with a blinding Mongolian snowstorm as well as wolves and frigid temperatures to locate and herd the endangered horses back to the preserve. Happily, they’re aided in their mission by a local teen who’s not only a crack horsewoman but is also happy to share her expertise on the terrain, weather, and plant and animal life of her native country.

Stowe shares her newfound knowledge with readers via her logs, which touch upon everything from the dynamics of extinction to the food, culture, and language of Mongolia. Meanwhile, genius Wheaton’s improvisational engineering skills, along with his amazing inventions—including the Dynochute, which transported them there, and the Finder, which acts as a scent-seeking drone—provide an intriguing sci-fi element (and frequently save the day).

All told, as Wheaton admits, “ResQ’s pretty good at finding missing animals.” To which Stowe adds her rallying cry: “Every animal counts!” Eva Pell is the former Under Secretary for Science at the Smithsonian Institution. www.evapell.com

Love, War, and Golems
Poor Jason is in a bad way. Once the savior of his people, he has lost his leadership position, his magical powers, and his lover. Now his childhood friend, a golem named Adem, has fled Haven at the behest of his maker and it’s up to Jason to venture out into the Wasteland to save him. And all this in the midst of an explosively destructive war. “I have never felt smaller,” Jason thinks. “The realm has never felt angrier, like it has been set on fire.”

“Sparks” is the fourth in E.J. Wenstrom’s “Chronicles of the Third Realm War,” a sci-fi fantasy series that, as she explains, “features a mashup of Greek mythology, Judeo-Christian folklore, and an extra dash of my own special brand of chaos.” In “Sparks,” she delivers it all in spades. Filled with fierce battles and passionate personal struggles, the story follows Jason and his companions as they journey to the Host, where they hope the Gods will grant them the means to set Adem free.

Their quest is not an easy one. Along the way, they fight off vicious winged creatures with sharp biting teeth, a three-headed beast, and a whole army of golems. When they unwittingly unleash the plagues foretold in the Texts, their torments take an even grimmer turn. Will they ever find the Gods and, if they do, will their wish be granted? Will they be able to rescue Adem in time to save the realm from the rebel forces?

More importantly, will the forces of good triumph? And will Jason and his fellow warriors survive to “become sparks of fire to consume the darkness”? As he chillingly observes, “being impossible has hardly stopped terrible things from reaching us.” In the Third Realm, perils await, but anything is possible—and readers who venture there will find a rewarding escape into a very creative and fully imagined world.

The Smartest Girl in the World